Following in the footsteps of such text-centered dystopian role-playing heavyweights as Fallout, Shadowrun, and the much more recent Disco Elysium, Anshar Studios’ cyberpunk-flavored investigation RPG Gamedec has some lofty expectations to live up to. After pushing the game back a year, the Polish developer has succeeded in crafting an intriguing sci-fi world, with the unusual twist of players taking on the role of a cyberspace investigator and solving crimes committed in virtual space. However, the game’s open-ended, adaptive approach that allows for bountiful player choice also somewhat undermines the narrative’s cohesion, particularly in the game’s early stages, making maintaining immersion tougher than it should be.

The game — or at least the parts of it occurring in realium — takes place in Warsaw City, a megalopolis reaching into the sky and built upon the crumbling ruins of old Warsaw. The protagonist makes a living as a Gamedec, a private investigator specializing in tracking down people and uncovering misdeeds in virtual space. In this fictional version of the late-22nd century, more and more people spend the majority of their time in any number of increasingly realistic online virtual reality spaces. Virtual couches, helmets, and nutritional pills that enable extended sessions have become commonplace in all but the poorest homes, and the extra anonymity afforded by online avatars routinely brings out the worst in a humanity already caught in a downward trajectory.

The game uses codex entries discovered over the course of its fifteen-hour runtime to do much of its considerable world-building. There is a wealth of information waiting to be uncovered for those who are willing to read it all, sometimes taking the unusual form of television or radio broadcast transcripts. This establishes a world in which the fantastical has become mundane, beginning with the aforementioned choice to spend one’s existence in virtualium, and continuing on to self-aware AI and the practice of transplanting one’s brain into an artificial host when the physical body dies. It’s a cold and sobering depiction of the future, and it can be quite captivating to read about. Individual codex entries are well written, though the deluge of information available at the outset can be a bit overwhelming. 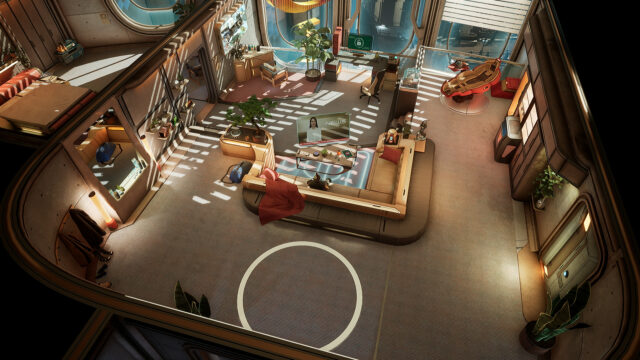 The Gamedec’s digs are a slick introduction to the fancy future world of the game.

Although the game’s world is established via expansive theoretical codex entries, the practical side that players will actually get to see and explore is a bit more limited in scope. The Gamedec’s investigations occasionally bleed over from virtual space into realium, giving players a handful of real-world locations to roam around in. From lush executive office penthouses to the elevated walkways and seedy bars that crowd the lower tiers — literally and figuratively — of society, these locations are a vital element of the setting, detailed and beautiful to look at. It’s a shame there aren’t more of them, as the game becomes a tad less captivating when it moves on to its meat and potatoes: the virtual worlds in which the Gamedecs ply their trade.

Gamedec sees players contracted to investigate several cases over its twelve-hour runtime. These cases take place in a handful of interactive online worlds, each with a unique aesthetic and gameplay element. Things kick off in the seedy alleyways of “Twisted & Perverted”, a world catering to humanity’s basest and most depraved desires (although the game has a mature bent, there is nothing outright X-rated here). This is in stark contrast to the second case, which takes players to the Wild West frontier world of “Harvest Time”. It’s after this case that the narrative begins to pick up a little, taking players to the MMO-inspired feudal Japanese world of “Knight’s Code”. A few other virtual locations — “Paradise Beach” and “Hunting Grounds” — make brief appearances, but aren’t as well fleshed out. The main worlds feature optional content that players can participate in, such as running a functional farm in “Harvest Time” and resource-gathering and other MMO busywork in “Knight’s Code”.

The trouble is that, despite the rich world-building, the moment-to-moment gameplay leaves something to be desired. It’s not due to lack of player agency (of which there is a ton, but more on that later) but a general feeling of all the pieces failing to connect in a cohesive, satisfying way, particularly during the game’s first half. There is little initially tying the cases together into an overarching narrative, and the first pair of investigations struggle to stoke player interest in any meaningful way. Side activities like farming and resource gathering aren’t much of a substitute for this somewhat listless early impression. Things do improve, and by the end of the second investigation the narrative takes some decidedly more interesting turns that lead to a more cohesive, if rather trope-heavy, sci-fi narrative. 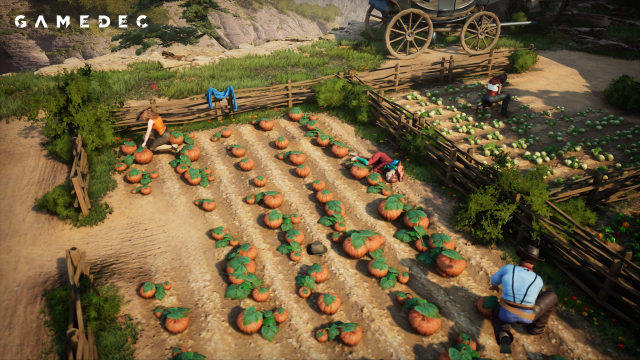 Tending crops in the Wild West world of Harvest Time feels a little out of place in this gritty sci-fi game.

While the early narrative has its shortcomings, the amount of variables that impact how the story unravels is rather impressive. Every event and confrontation can (and must) be completed without combat, as there is no fighting mechanic in the game. Engaging friend and foe alike opens up a dialog box that may contain verbal responses as well as potential actions the Gamedec can perform. Which options are available at any given time depends on a multitude of factors, such as which background the player chose for their Gamedec, which skills have been unlocked in the skill tree (choosing certain responses award four different varieties of skill points), and even which conclusions have already been drawn using the in-game deduction board. Though the overarching narrative still follows certain story beats, how each investigation unfolds can vary greatly. Choices made can affect everything from the mundane to a final choice of several possible resolutions to the game, some of which can be locked away from the player based on their decisions.

This high degree of open-endedness doesn’t always translate into satisfying gameplay, particularly for those with a completionist mindset. There are the commonplace examples of having to choose which faction to side with to move a case along, which then blocks off the opposing faction and all of its associated NPCs and side objectives. However, being locked out of a faction for siding with the opposition is, all things considered, a pretty standard occurrence in gaming. More unusual is how the deduction board has been implemented. Each investigation requires collecting clues and information on a variety of topics, represented by distinct questions on the deduction board that allow for one of several hypotheses. 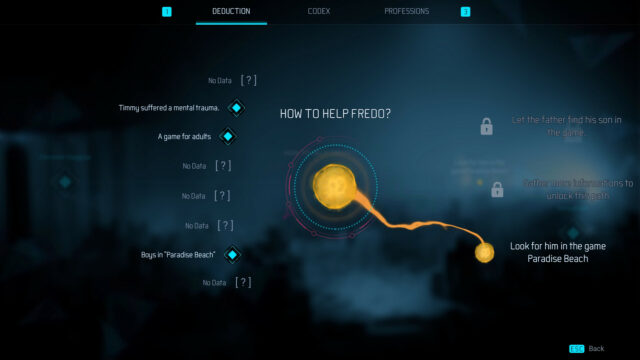 The deduction board allows for conclusions to be drawn at any time, even without all available evidence.

For example, in the process of determining the cause of death for a certain NPC, the player can stumble across clues that may point to one of several causes of death, including being shot by an automated turret or a fall. Each hypothetical answer only becomes available once evidence supporting it has been uncovered, and the player can lock in their answer at any time, even without finding all available evidence. In fact, there are so many potential clues and leads to find, and so many avenues of investigation that can effectively become blocked off due to choices made, that it is extremely rare to make a deduction in light of all available facts. To add extra stress, once a choice has been locked in, the decision cannot be reversed, and the implications of that choice carry forward and color all subsequent decisions in the investigation. There are no game over states, so what the player decides becomes part of the narrative, whether it’s a well-reasoned deduction or a rushed guess. This system, though extremely flexible, does its share to undermine the possibility of a satisfying mystery to actually solve.

Gamedec certainly doesn’t lack ambition. Its setting is well thought-out and provides a rich tapestry to fall back on when the player’s actual interactions with the world come up a little wanting. While its aesthetics are great, a bit more attention was needed in the audio department, as music is generally only adequate and there are entire sections devoid of music altogether. Voice-overs are likewise notably absent. The all-important investigations struggle to gel during the game’s first half, and while the narrative eventually picks up a bit more, it’s clear there were some missed opportunities here. Overall, Gamedec presents a rich world that would be worth revisiting again, though perhaps with an extra layer of polish needed for its narrative.