We’ve reached the point where it feels old talking about it now, but the revival of Final Fantasy XIV Online has been nothing short of incredible. After the issues that plagued what is now known as its 1.0 release, the game underwent a complete revamp under the direction of Naoki Yoshida, ending on an apocalyptic in-game event to signify its rebirth. The release of Final Fantasy XIV: A Realm Reborn did a great job of reviving the title, and since then the game has gone from strength to strength following the subsequent expansions Heavensward and Stormblood. One might assume that it would be tough to keep that going, but with Final Fantasy XIV: Shadowbringers, the team managed to surpass itself with its strongest content to date.

With the struggle between the Garlean Empire and Eorzean Alliance heading to a stalemate, the player character — hereafter referred to as the Warrior of Light — hears a voice calling to them. At the behest of this voice, the Warrior of Light heads to the Crystal Tower and finds themselves transported from their home world, The Source, to a whole new world called The First. This new world exists in a wildly different state to The Source; a calamity called the Flood of Light that took place a hundred years ago completely engulfed all but the region of Norvrandt. Though the Flood itself was magically held off, it has nevertheless resulted in creatures of light called Sin Eaters that terrorise the populace and show no signs of dropping in numbers. 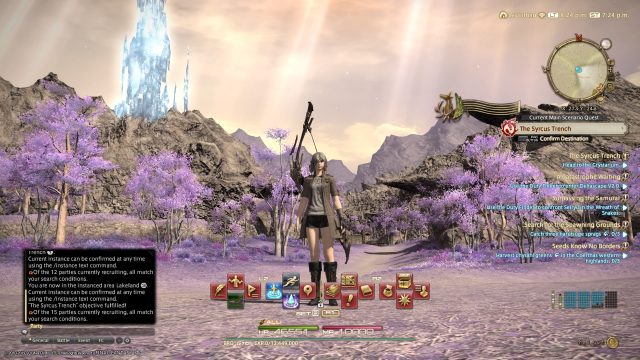 It’s very apparent from the start that players aren’t in The Source anymore.

This story sees Final Fantasy XIV revisit the Warriors of Darkness storyline that was introduced between the Heavensward and Stormblood expansions. Not content with ruining one world thanks to the relationship between The First and The Source, the Flood of Light threatens to also cause an incredible catastrophe in the latter, and the Warrior of Light needs to find some way to prevent it from happening. They are joined in this endeavour by the Crystal Exarch, a mysterious figure who leads those in The First who have not given up hope, as well as the rest of their allies from the Scions of the Seventh Dawn who were called into The First ahead of them. Help is far from universal, however, as many have instead signed up to get into Eulmore, a supposed haven whose rich populace live out their lives in luxury and just accept the state of the world.

The move from The Source to The First frees Shadowbringers to create a whole new setting without being too bound by the earlier lore and events. However, that’s not to say it’s disconnected from them, and some deep threads get fascinating reveals throughout the narrative. Shadowbringers superbly handles telling both a fresh story and making it tie back into the major points of Final Fantasy XIV’s ongoing tale, particularly its reveals about the nature of the Ascians and intertwined worlds that include The Source and The First. The plot has that ideal mixture of great individual events and a fascinating overall story with a fitting conclusion to its own arc and plenty of tantalising threads with endings still to be found.

It’s also noteworthy how Square Enix successfully makes the Warrior of Light feel more ingrained in Shadowbringers’ events than some of Final Fantasy XIV’s past storylines. In the past, the Warrior of Light has often felt like a bystander helping others whose goals are driving the plot, but here they truly feel like the main protagonist with events focused on them. Final Fantasy XIV has always had a strong focus on narrative, which is part of the reason it is much more welcoming to those who normally play single-player RPGs, but Shadowbringers is easily its best so far. The writing is fantastic throughout, with Final Fantasy XIV’s consistently excellent localisation only adding to the quality of the narrative. 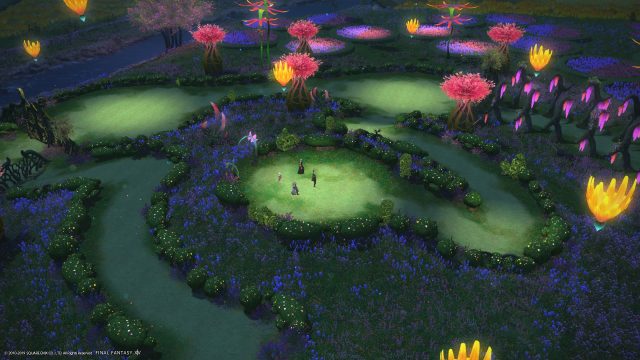 Considering how superbly Final Fantasy XIV has played since A Realm Reborn, it’s not remotely surprising that the gameplay of Shadowbringers is more evolution rather than revolution, though the exact amount of change varies from class to class. The game features a standard PC MMO action-bar control scheme, with the PlayStation 4 controls using its highly effective cross hotbar system that assigns abilities to combinations of the face buttons and D-pad with left and right triggers. Even the supposed fundamental change of removing the TP bar requires little adjustment as it effectively amounts to removing a restriction that didn’t come up much in the first place.

Shadowbringers retains its three job roles — tank, healer, and DPS. A balance of these is required for four-player dungeons and eight-player boss fights, aka trials, but all of these are adept at handling the solo content that makes up the vast majority of Shadowbringers. There are two new jobs, the tank Gunbreaker and supportive damage-dealer Dancer, while a number of jobs have seen varying levels of reworking. Similar to Stormblood, Square Enix has ensured ability creep doesn’t sneak in, removing and merging old abilities to make room for a small selection of new ones. There are also some much welcome improvements to the UI that further make the game stand out as the premier MMORPG out there. There are some small concerns with respect to the ever-challenging issue of job balance, particularly on the healer side as Square Enix refocuses the role a touch, and the absence of a new healer class making it more of a premium. That may need a bit of addressing, but there’s no job that doesn’t feel viable.

Encounter designs in Shadowbringers are excellent, providing a good but fair challenge that makes fights exciting to be involved in. As with all Final Fantasy XIV boss fights, just standing still and trying to overwhelm a boss is a sure-fire path to a wipe; bosses have many location, target, or status-based abilities that need to be avoided or otherwise mitigated through players’ actions. It always feels like victory in a boss fight comes from the players’ actions, teamwork, and ability to learn rather than relying on stats. Square Enix has got the general balance just right in Shadowbringers. Virtually all of the boss fights are exciting encounters that constantly demand attention and keep players on their toes, always providing a great sense of achievement once conquered. 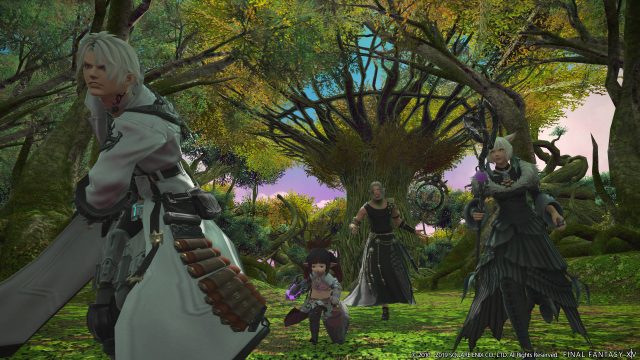 Trusts are a very welcome addition to the game.

One of the most substantial additions in Shadowbringers is the Trust System. This lets players tackle Shadowbringers’ four-player dungeons solo should they wish, with the remaining three slots taken up by NPC story allies. Trusts are a very welcome addition to the game, helping to add a bit more to the narrative of each dungeon, but also making the experience a whole lot less stressful as players don’t feel like they’re letting down other players should a mistake happen. Trusts are also great for helping players learn each dungeon’s bosses as they can reliably follow the actions of the Trust NPCs when it comes to dealing with boss abilities. It remains to be seen if these will be expanded to elsewhere in the game, but their limited inclusion at this stage is only a good thing.

Though it doesn’t really impact anything in the main story, one argument that can be levied against Final Fantasy XIV is its reliance on other titles for some of its inspirations, with Final Fantasy VIII the chief apparent influencer this time around. As things go, it’s still a very minor complaint, but there are occasions where it treads that fine line between a fan-pleasing homage and a distraction from the original designs and ideas. Another potential annoyance can also be seen as the result of Shadowbringers’ quality elsewhere, with some side quest dumps that can cause players to have to put the main quest on hold. Really, Square Enix handles these as best as it can, as the side quests don’t hold things up for too long and add some good flavour to each location they come from. It’s just an initial bit of annoyance from something getting in the way of powering through the fascinating main plot that the occasional, if expected, dumps of up to a dozen extra quests illicit. However, this is mostly splitting of hairs and there’s a quick realisation that this is just extra time to further enjoy what Shadowbringers has to offer.

Masayoshi Soken has already earned much-deserved acclaim for his past work on Final Fantasy XIV’s soundtracks, but the magnificent soundtrack to Shadowbringers manages to take it to another level. There are many standout tracks, but particular note goes to the hauntingly beautiful and somewhat melancholic theme for the expansion’s final area — one that is a perfect fit for the location and the narrative at that point. The voice acting is a strong point, with Square Enix once again using a predominantly British cast for the English dub. There isn’t as much of it as one might hope, with it mostly reserved for the more dramatic scenes, but the voice acting does a great job adding to the drama and flavour of the races, locations, and characters, and there is always the fantastic music to enjoy instead when it isn’t present. 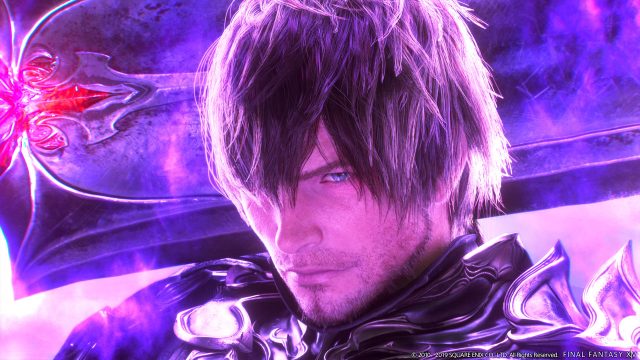 Shadowbringers does a great job of truly feeling like the Warrior of Light’s story.

Though the Final Fantasy series is regarded as pushing the technical capabilities of the day for its visuals, Final Fantasy XIV is more interested in keeping its player base as intact as it can, and that continues with Shadowbringers. But while Final Fantasy XIV doesn’t aim to break new technical ground, it remains at the pinnacle of outstanding design. The design and variation are marvellous throughout, be it in its architecture, environments, enemies, the list goes on. Shadowbringers features tons of excellent locations, from the contrasting slums and splendour of Eulmore to the stunning flower fields of Il Mheg, and it makes fantastic use of the narrative theme of light and darkness without diluting the colour palette. The music and location designs combine to make places where one is more than happy to just stand around and take in the audio-visual magnificence without ever becoming bored.

Final Fantasy XIV: Shadowbringers is outstanding, and the pinnacle of Final Fantasy XIV so far. All of its elements blend beautifully for not only one of the strongest MMORPG experiences going, but one of the strongest RPG experiences full stop. The ability for its gameplay to cater to both players who prefer to play predominantly solo and those who prefer the more communal MMO elements is amazing, and the audio and narrative just further pile on the goodness. For those debating getting into Final Fantasy XIV, the release of Shadowbringers offers an ideal time to do it, with the very best awaiting them at the end.