Final Fantasy XIV has gone from strength to strength since its revival with A Realm Reborn in 2013. Under the stewardship of Naoki Yoshida, the game has become beloved by both MMORPG and regular JRPG players the world over thanks to brilliant storytelling, immensely satisfying combat, and incredible audiovisual presentation. While past expansions have taken players into the skies, across the seas, and even to a whole new world, Final Fantasy XIV: Endwalker faces arguably its most daunting narrative challenge yet: bringing its biggest overarching story threads to a conclusion. It’s very pleasing to say that Endwalker succeeds in meeting that challenge head on.

Following on from the events of Shadowbringers, Eorzea still remains under a grave threat emanating from the Garlean Empire. However, this threat is no longer mere conquest as the fanatical Telophoroi under the machinations of the nihilistic Ascian Fandaniel seek to bring about the Final Days and the end of all things. The Telophoroi have built mysterious towers gathering aether and enthralling any who approach except the select few with the power to resist, so the Warrior of Light player character and the Scions of the Seventh Dawn seek out additional allies in Sharlayan and Radz-at-Han to counter this existential threat. 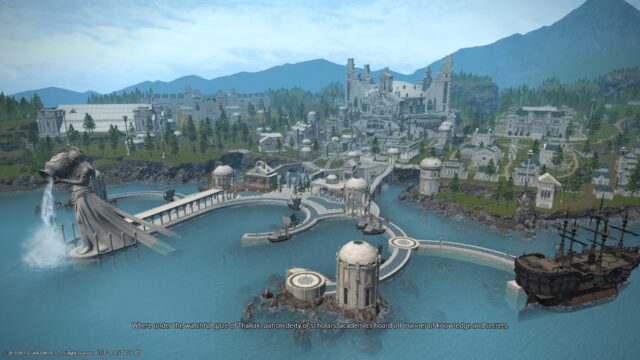 The design team is once again on point, particularly in the later parts of the expansion.

Endwalker’s plot moves along at a brisk pace and is packed to the brim with twists and surprises. Fresh off the rapturous reception to Shadowbringers, lead story designers Natsuko Ishikawa and Banri Oda are able to keep players guessing as to where it’s going to go next. Hope versus despair is very much the key theme of Endwalker, and the story ensures that the two are always present and lending credence to events as they unfold. While many of its major themes and devices are not new to the worlds of storytelling and myth, Endwalker rises to the top by virtue of the incredible quality of its writing and sheer attention to detail throughout. The story calls back to many key narrative elements from before, while giving them fresh angles and additional depth that pay off immensely well. Endwalker makes use of mythological and historical influences — Greece and south Asia being the most obvious examples here — but blends them superbly with its existing world-building such that these places fit right in with what we already know of the world.

Credit must be paid to the localisation team, who are once again at the top of their game with the fantastic English script, as well as the individual character writing across the board. From the key players to even those otherwise unimportant NPCs whose comments still play a key role in bringing the world and its story to life, the substance of the narrative ensures the tale is a memorable one. The Scions of the Seventh Dawn are undoubted stars of the show and the bonds that have grown across the life of the game between them and the player character — as well as all of those connections that they and the player have developed all across Eorzea and beyond — are used to superb effect to provide more than Endwalker’s fair share of heartwarming and heartwrenching moments. Much like Shadowbringers, Endwalker also does an excellent job of making the player character one of the biggest focuses of the story, and their role and actions are crucial to proceedings. The writing ensures that all that has come before becomes finely honed ingredients for supreme emotional payoffs. 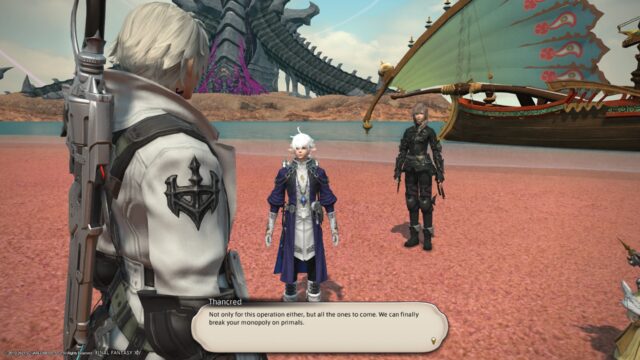 Endwalker’s Trust system and special encounters let the Scions become as close to proper party members as they’ve ever been.

Though Square Enix has been able to find plenty of tricks and touches through its designers, the graphical limitations of its engine are apparent at points, primarily when certain textures and surfaces are viewed close up. Nevertheless, Endwalker is still a treat to look at and the positive trade-off from Square Enix keeping the game technically grounded is that its performance is consistently excellent despite plenty of flashy battle effects, with PlayStation 5 owners benefitting from lightning-fast loading times. The level of detail and beauty in the scenery and models is evident throughout, and there are countless vistas or sights well worth spending time exploring just to get a look at them. Without spoiling the surprises, players will get to see plenty of breathtaking sights and scenes wherever they go.

Masayoshi Soken leads the sound direction once again and the sound team, including fellow composers Daiki Ishikawa and Takafumi Imamura, makes full use of new compositions and Final Fantasy XIV’s extensive musical library to make Endwalker an aural celebration of the complete Hydaelyn and Zodiark saga. Pretty much all of the British-based voice cast, many of whom joined for Heavensward, return alongside some new names. The game again makes appropriate use of its cast and accents available, with the brilliant writing and strong direction able to let the cast use their experience to put on a fine collective performance. 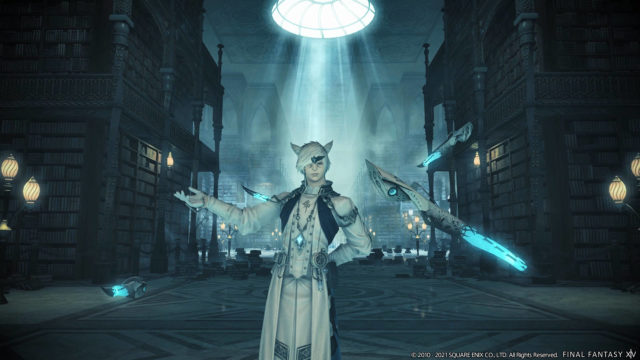 Final Fantasy XIV’s combat has been settled for a good time and Endwalker doesn’t seek to rock the boat. How much change there is in Endwalker for existing players is dependent entirely on players’ jobs. Some are like Bard and have received only minor adjustments but otherwise play the same as before, while others — such as Summoner — come with significant revamps. In addition, the game offers another pair of brand new jobs, the healer Sage and the melee damage-dealer Reaper. As has been the case before, the new entries and reworks are fun and intuitive to get to grips with after some practice, and there’s a rewarding feeling as players become familiar and eventually master the ins and outs of their combat roles. The controls work incredibly well, including the console-specific cross hotbar system that assigns abilities to combinations of face buttons and D-pad with left and right triggers, and Square Enix has been careful to avoid skill bloat to keep it effective. The task of keeping everything working together can’t be an easy one, but all jobs feel viable and players have the freedom to go and experiment to find the ones that they can jive with.

The regular gameplay loop of Endwalker is also very much the same as previous expansions, as players travel across its open zones from point to point as the story dictates, dealing with regular spawning enemies as necessary. Each zone features multiple hubs, including Aetheryte fast travel points, around which story events revolve. These also provide plenty of sidequests to add flavour as well as rewards in terms of experience points and items such as gear. Endwalker tries to branch out a little bit in some of its encounters, but these occurrences are usually few and far between. Every now and then it offers a special story mission, including some where players control one of the other Scions with a simplified skill loadout and a slight twist on regular fights. They make for interesting alterations on the standard formula, though the few stealth-based tasks that amount to standing behind pieces of environment at the correct moments can be a bit grating.

Sidequests are never very complex but are individually short and have enough varied flavour to keep them satisfying. At the very least, they give players more enjoyable writing and additional time to get swept up in the constantly immersive audiovisual experience, which is always welcome. There are some other quality-of-life touches that make for minor but welcome improvements, and so far the reduction in the game’s numerical values has gone largely unnoticed. Endwalker may be a smaller evolution on the gameplay front than some might hope, but the easy-to-use and challenging-to-master gameplay once again pays dividends and ensures that it’s still a thoroughly enjoyable time greatly complemented by its storytelling and presentation. 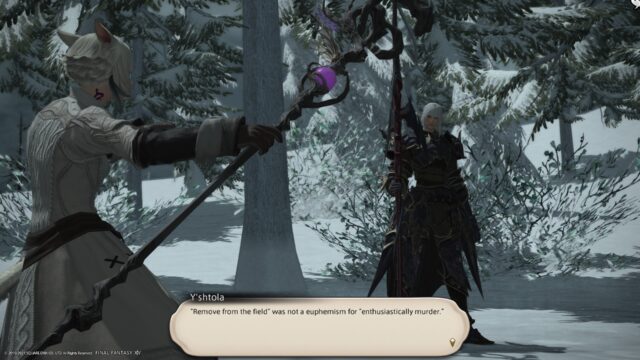 The writing keeps up at the same heady height achieved in Shadowbringers, running the gamut from piling on the emotion to snappy repartee.

Final Fantasy XIV’s biggest gameplay highlights, however, come in the four-person dungeons and eight-person trial boss battles, and Endwalker is no exception in adding to the list of excellent examples. The Trust system from Shadowbringers sticks around and lets players run through the main scenario dungeons with AI-controlled Scions as their allies rather than other players, but either way the dungeons are thoroughly engaging experiences, each including a trio of boss fights themselves. Like elsewhere in Final Fantasy XIV, Endwalker’s boss fights are always standout occasions that require players to pay attention to what’s going on and act accordingly. Every failure in a boss fight, whether it be in a dungeon or Trial, is a learning experience that sets players up to do better with the next attempt by being ready for what’s coming or appropriately reacting to the various tells it provides. Whether it’s a first-time success or one built up by learning from past missteps, victory always feels satisfying and well-earned.

The experience rewards in Endwalker are generous compared to previous expansions, so much so that it feels like players are encouraged to level up two jobs while advancing through it, particularly if they are going all the side quests that come up along the way. Players happy to stick to their primary job are more than welcome to do so with the level sync preventing them from making things too trivial, and it’s not like the game is lacking in alternate ways to level up other jobs, but completing all of the sidequests while going through the story will see players easily hit the new 90 level cap long before reaching the equivalent zone. While Square Enix ensured that the main story balancing is appropriate to the skill level of its less hardcore players, those seeking stronger challenges have some Savage difficulty trials already available and the first part of the new Pandæmonium raid series, with plenty more to come in the usual major post-expansion patches.

Final Fantasy XIV: A Realm Reborn and all that has come after is one of the greatest success stories in the history of gaming, so much so that said success has become one of its greatest challenges. Though there is still much more to come from Final Fantasy XIV in the future, Endwalker is a magnificent cap on everything leading up to it and a fitting end to the story of Hydaelyn and Zodiark. The passion of the Final Fantasy XIV team and its desire to do the best that it can for the fanbase is clear, and it deserves every one of the plaudits that has come its way.