It’s Not Easy Being This Popular, You Know

The past couple of years have certainly given many the opportunity to appreciate the Final Fantasy series with a mixture of remasters, new titles, and additional content. One of those entries to receive deserved renewed focus was Final Fantasy XII, with Final Fantasy XII: The Zodiac Age allowing fans to try out the International Zodiac Job System previously only available in Japan, and giving a newer generation the chance to appreciate the game. However, it’s the new Nintendo Switch version that has excited me the most; the game is another that fits perfectly for the system, the latest entry on the console to give handheld gamers another excellent experience.

Final Fantasy XII takes place in the world of Ivalice, mostly around the kingdom of Dalmasca, which lies between the large empires of Rozarria and Arcadia. The introduction begins with the wedding of Princess Ashe to Prince Rasler of the neighbouring kingodm of Nabradia, but the celebrations are short-lived as Arcadia begins an invasion. Nabradia is conquered, with Rasler falling in battle, and the empire’s gaze soon turns to Dalmasca. Players get a quick tutorial controlling young Dalmascan soldier Reks, who aims to rescue the king only for him to be seemingly killed by Reks’ own commander. The invasion is completed, followed quickly by an announcement that Ashe has taken her own life.

The game proper begins a couple of years later following street urchin Vaan, Reks’ younger brother. Vaan harbours a grudge against the empire and uses the opportunity of the arrival of Dalmasca’s new viceroy appointed by the empire to take some small revenge by robbing the palace’s treasury. While on his thieving mission, Vaan and his childhood friend Penelo get caught up in an incident pileup as an insurgency and a pair of sky pirates also cause a ruckus for their own goals. The group — which includes an alive-and-well Princess Ashe — ends up working together in an attempt to reclaim the throne, get revenge on the empire, or get rich, depending on which member of the group is asked. 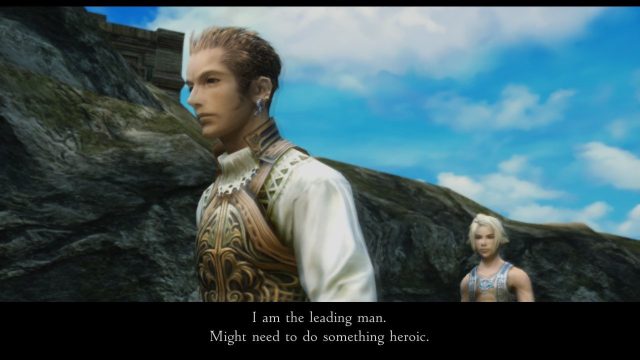 Such is the downside to being the leading man.

One of Final Fantasy XII’s departures from previous entries is a lack of any out-and-out main protagonist. Though Vaan is the one consistent viewpoint member, each of the main cast gets almost equal billing. The game does a great job giving everyone in the party their own different motivations, and this extends to the supporting cast as well. Vaan gets ire from some quarters but is played realistically as a young boy who doesn’t know the ways of the world and needs a stern word every now and then. Final Fantasy XII’s story does a fine job creating and showing the internal conflicts between all of the various parties involved.

It speaks to how engaging the setting is that the main disappointment is that the world isn’t explored as much as one would dearly like it to have been, particularly those elements that play key roles towards the end. It creates an interesting dichotomy: Final Fantasy XII does a great job of showing a world that doesn’t wait around and keeps moving on while the player is off gallivanting around elsewhere, but on the other hand, the ending presented feels a little bit rushed as the climactic world-changing battle occurs even without much actual influence from the party.

Final Fantasy XII marks the mainline single-player series’ departure from dedicated battle arenas to combat taking place during exploration. It still retains some vestiges of the ATB system, but everyone now acts in real-time without having to wait for the other combatants to finish. At first glance, battle seems chaotic, but the Gambit System and UI do a great job of providing all the management tools necessary, affording players as much direct control as they desire or need depending on the circumstances. Each character gets a number of automated commands with a trigger clause and corresponding action ordered by priority. For example, a character can be instructed to attack the party leader’s target, but if a character has less than 50% health they will instead cast Cure on them. 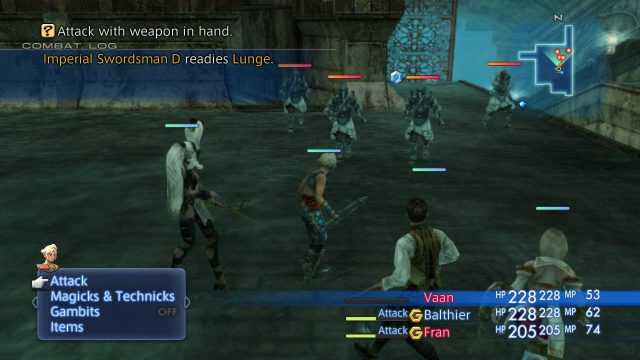 If pop culture has taught us nothing else, it’s that the group with sensible armour is doomed.

The Gambit System is powerful and certainly takes a lot of the annoyance out of some of the regular battles — boosted further by The Zodiac Age’s turbo mode — but never to the extent that players don’t have to keep paying attention and intervene with direct control or modifications to their Gambits, unless they actively go out of their way to overlevel. Players will also need to pay attention when setting up their Gambits, as an improperly ordered list will cause potentially important instructions to be forgone entirely. The newest Nintendo Switch and Xbox One versions add even more usability to the system, giving each character up to three sets of Gambits that can be readily switched between. The main weakness of the Gambit System is that some of the actions are not in tune with their effects, so a character will keep attempting to inflict a status effect the target is immune to, or continually try to steal when the enemy is not carrying anything stealable. However, combat itself offers tons of highly rewarding moments; whether victory is due to establishing a strong set of Gambits or timely player intervention, success in combat always feels like it comes from the player’s side rather than simply the AI following its own plan.

Final Fantasy XII has some curious elements to its balance. A good number of bosses will often boost themselves up greatly when nearing defeat, which makes sense but can cause annoyance when what is otherwise a highly enjoyable fight becomes a desperate struggle to revive characters quickly enough to unleash the game’s special chargeable combo attacks called Quickenings. Summons are present under the name of Espers, but these simply aren’t worth using as they use up the same charge bar as the far more reliable get-out-of-jail option of a Quickening. There is plenty of additional content, the most obvious of which are hunts that task players with defeating powerful enemies, but a lot of it requires players go more out their way than the game really needed to make them, while the large difference in power between the first set of hunts and subsequent ones is likely to cause many to forget about them completely. The main quest does a fine job of ensuring that players don’t feel they’ve missed out on too much, but the few times that side content is encountered it feels disconnected from the main game.

Final Fantasy XII also deviates from the series’ history with the License Board. While the standard automated level-up procedure is in play, the License Board gives players control over the direction each character goes in terms of equipment and abilities. Each defeated enemy grants one or more LP than can be spent on nodes that might unlock new spells or let the character equip better armour. In the original game, there was just one massive License Board, but The Zodiac Age gives players a bit more direction by having twelve specific boards boards related to certain combat roles, such as White Mage or Knight. Each character is able to unlock two License Boards, so players are still given a good amount of flexibility in how they build the party, but it helps focus them towards more established and useful combat roles. The Switch and Xbox One versions also help out here by letting characters respec, if so desired. 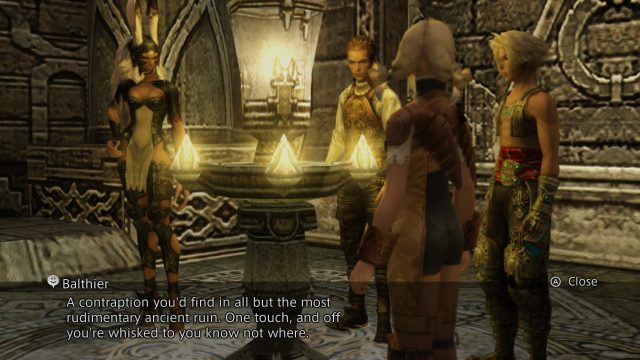 The setting has the traditional JRPG anachronism — high-tech airships and speedy fighters jet around the sky while plate-armoured foot soldiers fight armed with swords and spears — but its design is wonderful. The eastern Mediterranean feel is played with nicely and reflected in the architecture, clothing, and locations. The in-engine scenes are a little bit blurry sometimes, but apart from that Final Fantasy XII looks gorgeous on the Switch, with a clear UI and consistent frame rate.

The visuals are helped by a great soundtrack primarily composed by Hitoshi Sakimoto, with additional music from Masaharu Iwata and Hayato Matsuo. Sakimoto may have been tempted to try and emulate Nobuo Uematsu’s style, but instead created his own score and it’s a very good thing that he went in that direction. Specific tracks in Final Fantasy XII’s score may not be as individually memorable as previous series soundtracks, but the score matches the setting and themes of the game beautifully and comes together as a superb complement to the game. The voice acting also helps with strong performances all round, particularly for Balthier and Fran; the one disappointment is that large chunks of the dialogue are not voiced, but such were the times in the mid-2000s.

Final Fantasy XII feels like one of those games that has gotten more appreciation with age, and that feeling is richly deserved. It also feels like one of those games that the Nintendo Switch was built for. The remastered visuals look great on the handheld screen and the controls and UI work nicely, while new features such as the autosave lend themselves to playing it on the system or otherwise add much welcomed quality of life improvements. It has some flaws and a story that feels like it doesn’t quite tell the full tale, but overall it’s an excellent experience that holds up incredibly well.