Don’t Trust Everything You Read

YummyYummyTummy’s debut title Fallen Legion comes with plenty of interesting ideas. Split between two versions — the PlayStation 4’s Sins of an Empire and the PlayStation Vita’s Flames of Rebellion — that tell the tale from two different viewpoints, the 2D title sports some nifty style in its proceedings and avoids bogging things down with overwhelming complexity in doing so. Though some of the experience leaves a bit to be desired, the ideas combined with an enjoyable pace of play leads to a fun overall experience.

The two games tell different paths of the same overall story, though by following opposing sides in a civil conflict taking their own paths to the capital, events are for the most part distinct. Players control one of two characters: Princess Cecille in Sins of an Empire or Legatus Laendur in Flames of Rebellion. At the start of the game both are on the same side, dealing with a military threat to the Fenumian Empire. However, Cecille’s retainer Maurice turns up with the news that Cecille’s father, the Emperor, has died and that she is now in charge. With Maurice is a talking Grimoire that claims to have acted as the Emporer’s guide and to be the primary reason the Empire has held together. Cecille reluctantly goes along with what the Grimoire says and the highly dubious actions it requires to salvage her nation. Meanwhile, Laendur is highly suspicious of the Grimoire, and upon learning what it requires (greatly encouraged by his confidants), he rises up in open rebellion against Cecille.

Some interesting world-building has been put into Fallen Legion, but most of it doesn’t actually affect the story in any meaningful way. The game is also rather poor at explaining the route the protagonists are taking to achieve their goals, which is particularly evident in Cecille’s quest. Instead, events take a back seat as Cecille and Laendur charge through location after location, occasionally having another conversation to remind players what the current goal is but not really advancing it in any way until the game decides it is time to. On the plus side, Fallen Legion handles bringing the two versions’ paths together at the end well and provides a satisfying finale, even if the path taken to get there is somewhat meandering. 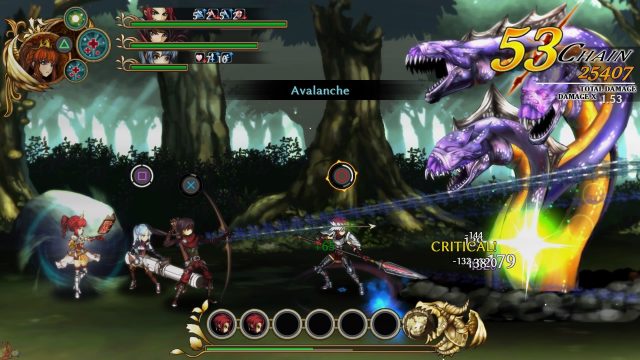 This boss is a jerk.

Both games play in exactly the same way with an identical structure and UI, though the order of certain bosses or unlocks is different. Players undertake a linear set of missions, with a couple of optional exceptions, which consist of a series of battles and leadership choices. Cecille and Laendur do not fight directly, instead summoning powerful spirits called Exemplars that do their bidding. Exemplars are each assigned one of the face buttons and will launch a basic attack if that button is pressed and the meter above their heads is sufficiently filled. A combo bar is at the bottom of the screen, and if players manage to get to the slot indicated with a flame then that Exemplar will do a deathblow, a special attack with extra effects assigned at the pre-mission party select screen.

Though it can be tempting to focus on a button-mashing-style offense, players will quickly find that isn’t very effective. Players will need to make good use of the block button to prevent their Exemplars being wiped out by the opposition. Blocking is all about timing, with a well-timed block deflecting the attack back at the enemy or leaving them open to a counter-attack. While it adds a good amount of depth and back-and-forth to combat, there are a few issues with the block system as the reliance on timing it correctly is likely where players will find the most frustration in Fallen Legion. The precision required is somewhat unforgiving, and certain types of enemies will be able to launch their attack without much warning, requiring an almost precognitive reaction from the player. It can also be very hard to even see the signals for an incoming attack when there are numerous enemies. Though holding the block button down without going for perfect timing can mitigate damage a bit, doing so isn’t useful as the Exemplars’ action bars will not recharge with it held down.

Although they don’t directly participate in combat, Cecille and Laendur have some supportive actions in the form of three spells: magic attack, heal, or resurrect, though other options can appear later on. Each has its own mana bar, and these are filled by attacking with the Exemplars. If all of the Exemplars go down, players can rapidly press the triangle button to recharge mana in the hopes of being able to resurrect one, but if Cecille or Laendur are directly hit at any point then it is game over (albeit with a forgiving retry option). Another small piece of depth is offered by the option to reorder the Exemplars, so someone else can go to the front and perhaps give the tank a brief rest. It’s a generally simple yet effective combat system, though there will be times when the slightly unpredictable balance and difficulty of successfully blocking causes frustration amongst players.

For the choice mission sections, players are given a situation and tthree possible responses that must be decided upon within a short time. For example, a key bridge may have been damaged and players can choose between ignoring it, fixing it, or rerouting the traffic that uses it; or a politician may introduce a bill and players can potentially support or sabotage it. While the choices are flavoured as empire-related decisions, they have a much more immediate effect in providing buffs, called tributes, to the Exemplars that last for the duration of the mission. However, similarly to the disconnect between missions and story, these choices also don’t appear to have much ramification on the world and players frequently don’t get to find out what actually happens as a result of the selection made, even those that are part of a larger series of options. There are somes cases where the game did a poor job explaining what side an option is in favour of, leading to the opposite result of what players may think should occur. While it’s an interesting and generally engaging idea, shine is greatly taken off by it not seeming to do much mmore than provide buffs to the Exemplars. 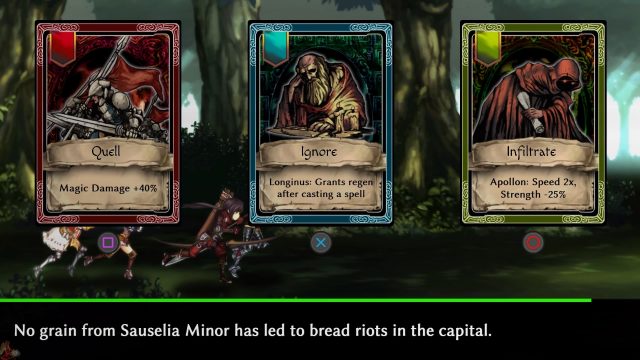 There is no level-up mechanic: instead, players pick up gems that can be equipped in three slots and provide bonuses. Players will also frequently come across new tributes to add to the list of ones that may appear in the choices during missions. Towards the end of the game, players will also find that their Exemplars upgrade themselves into an advanced form, which provides a substantial attribute boost. Players can go back to any previously completed level, though outside of trying to get the highest rank there is little reason to do so. Though it may be lacking in extra features, this generally works to Fallen Legion‘s benefit, allowing the game to move along quickly, with individual missions lasting no more than ten minutes, making it very easy to get sucked into a state of “just one more mission”. It should also be noted that there is only one save slot per console account.

Fallen Legion‘s music is pleasing to listen to, but outside of the Exemplars calling their deathblows, the only voice acting is reserved for after-the-fact narrative monologues from that version’s main character. The acting itself is fine, but appears so sparsely that it doesn’t add much in the grand scheme of things. The game has a pleasing 2D artistic style, though the backgrounds are a bit generic and just blend together after a while. Although they are a bit of a pain with respect to block timing, the animations are smooth and work well with the combat. Unfortunately, the PlayStation Vita version of the game lags a bit on the technical front. There are long loading times, with the small animation on the loading screen becoming incredibly janky, and quite often the camera will seemingly lose track of the centre of the action and jerk. The issues are far from becoming a dealbreaker, but remain noticeable throughout.

Keeping a quick pace helps to emphasise Fallen Legion‘s strengths and mitigate its weaknesses. There are times where the game’s interesting flavour can’t quite mask the lack of substance in certain areas, but despite this it remained enjoyable to play throughout. It’s certainly a title worth checking out, and should provide a good few evenings worth of entertainment. Plenty of neat ideas and an interesting, if underutilised, world mark a solid debut title for the developer and put it in good standing for future titles.