Empire of Sin is a game set against the rare backdrop of 1920s Chicago.  Romero Games breathes life into this setting with stylish tactical combat and the ability to interact with a variety of prohibition-era kingpins.  The city never sleeps and the game always provides the player with something to do.  This is accomplished by combining complex diplomacy and management-sim aspects with an enjoyable combat system.  All that good combat is overshadowed though, as the other headlining features of the game feel unimportant.  Being in a gang war is fun and the game had the potential for engagement from much more than just combat, but decides to play it safe and just have the singular kill all rivals win condition.

Empire of Sin lets the player choose from a selection of fourteen bosses.  These bosses start off small with only a base and one revenue-generating building called a racket.  The goal is to eliminate all other major factions, which on campaign start can be adjusted from three to a total of a fourteen-faction free-for-all.  Maps are split into neighborhoods that are procedurally-generated with a fog of war present until the entire neighborhood is unlocked.  Different-sized maps are available, starting from the small three-neighborhood battlegrounds to the full-sized ones containing ten neighborhoods and over a hundred buildings in total.  Numerous minor factions appear throughout the neighborhoods, but these rarely grow and barely interact with anyone at all.  Police officers also roam the streets and try to take out anybody who starts a fight in their line of sight.  If players attract too much heat, their rackets begin to shut down, but this is a minor concern as an entire playthrough may well pass without it occurring once. 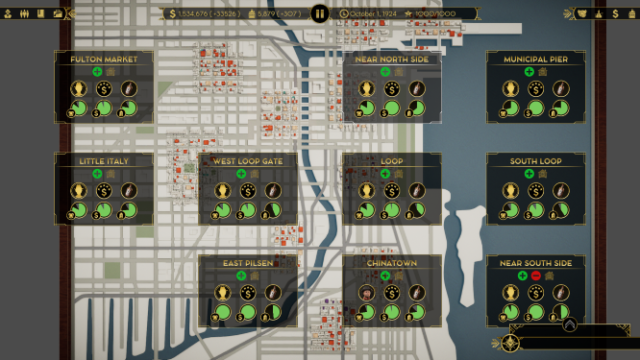 The story in Empire of Sin is sparse with most of the fun coming from investing in both diplomatic and violent struggles with other factions.  Each faction has its own short introductory scenario that lays bare its reasons for being on the mean streets of Chicago in the first place, but these don’t take long to complete, being more for flavor than anything else, and after these scenarios end no further main story content appears.  Side missions do appear in the form of tutorial-like quests such as taking over a neighborhood, making larger amounts of money in a week, and short story-driven missions to bond with the hired help.  These side missions can provide more notoriety and funds as well as the occasional change in traits for the hired help.  Random events can occur that cause changes in boss or character traits as well as changes in funds depending on the outcomes chosen.

All buildings in a neighborhood can be turned into a racket for the player’s use.  With them the player gets to make more money and also build influence to unlock stronger henchmen to hire to help take down enemies.  Safe houses are the main hubs in a neighborhood, and if all of them fall so does the faction controlling them.  Brothels, casinos, and speakeasies provide the bulk of the income, while hotels bring more citizens into a neighborhood and provide additional traffic for other buildings.  These rackets can be built by purchasing open areas, taking over thug-infested buildings, or taking over other factions’ buildings.  These buildings function as Empire of Sin‘s lifeblood as power can quickly equal how many funds a player has.  Everything in the game uses money, from maintaining rackets, to hiring goons from the black book to build an army, to currying favor with other bosses. 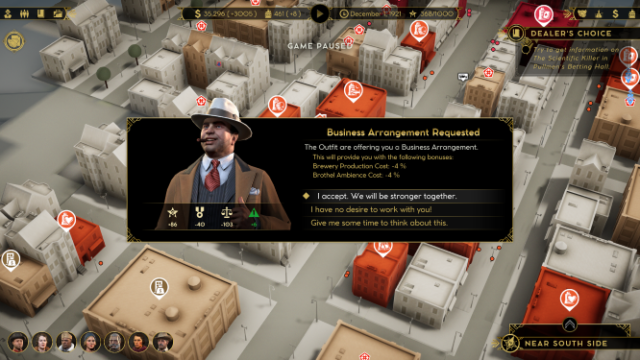 When Al Capone offers a deal, who could refuse?

Interacting with other bosses is important in the short-term as the player’s empire grows.  Protection plans and non-aggression treaties can be formed to prevent factions from fighting each other.  These can be offered by the player’s faction or may be offered to the player.  Enemy factions will never break these treaties by attacking first, which makes it easier to plan around which faction to take over next.  Attacking too many factions can cause the player to be overwhelmed so choosing battles wisely and building alliances is key.  Sit-downs are meetings with other faction bosses to set up trade agreements or break them off and feature a voiced cutscene with a dialogue tree.  These sit-downs look interesting but don’t offer any benefit outside of bosses sharing skills for lowering racket costs.  Demanding retribution usually consists of one boss handing the racket back with half-hearted apology.  Overall, diplomacy, while intriguing, is ultimately useless to the game’s end goal of destroying all factions, except as a way to manage whom to attack first.

Declaring war on too many factions at once is immediately punished.  This punishment comes from having player’s rackets getting attacked.  These fights are done with player-controlled guards that have no skills and minimal equipment and cannot be auto completed.  Frustration sets in, as the fights are drawn out and less fun as a result.  Being attacked can happen at any time, but occurs more frequently during an open declaration of war against another faction.  On the other hand, fights initiated by the player are the most addicting part of the game, giving players access to the best equipment and a variety of skills to make each fight fun and interesting.  Initiated combat itself is a breeze to get into and flows freely but can be costly.  All characters can either die or bleed out for four turns from losing all their health, and will die permanently if not healed.  This makes any critical hit or well-tossed grenade from an enemy deadly as weapons get stronger and health pools stay stagnant. 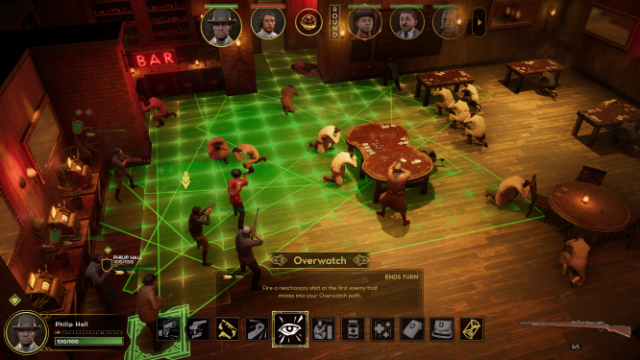 The easiest way to gain an advantage over the other factions is through collecting gear.  This is best accomplished by ransacking thug-controlled buildings or taking out minor factions for more funds.  There’s a balance to tread between building strength and going on the attack, as waiting too long to start attacking major factions only gives them time to get stronger and have heartier defenses.  Grinding only goes so far in setting up for the battles ahead, as it only provides funds and gear.  The game does not feature a traditional level-up system, instead each character receives a time-based skill tree.  The exception to this is the boss who, in addition to his skill tree, can also upgrade stats through notoriety milestones and build up skills such as persuasion, cunning, and intimidation that help during the game’s side quests and random events.  Bosses can also equip any gear and function as the most versatile member of any strike team.  Extra gear is important to improve the hired help, all of whom are specialists in either a type of combat or provide the only form of skill-based healing.  There’s plenty of weapon variety and every weapon expected from a turf war taking place in 1920s Chicago is accounted for.  Luckily all weapon types work well in tandem with each other and building teams of hired help that fit any play style is easy.

The graphics and music of Empire of Sin go hand-in-hand.  Both feature crispness and a unique style expected of the unusual setting.  Both also feature issues that bog them down.  The buildings, streets, and neighborhoods provide a very 1920s feel and are very appreciated in giving the game a unique place in the genre.  On the other hand, combat does not feature fluid animations and characters can be locked into position when moving or completing an action, making them look clunky.  Music has a big-band flair and sound effects straight out of the era.  There is a limited number of effects though and the anguished cries of “Oh, they got me!” and curse words are rather repetitious.  What is there works, but a lot more could have been done to make the game feel more alive.

Empire of Sin is a good game held back only by a lack of variety in ways to win, leaving most forms of diplomacy and expansion feeling useless long-term.  This makes it feel like the game is punishing the player for playing slowly and methodically as enemy factions will only get stronger as game continues, though it lets players keep each playthrough unique by varying how deep they go into the intricate systems the game provides.  However, the combat system is lot of fun and prohibition era Chicago has never felt more alive, so many will find it worth their time diving into the unique setting.