It may be a bit hyperbolic to have a developer named Hyper Awesome Entertainment, because living up to that label is a challenge. Hyper Awesome’s first attempt is with Dungeon Punks, plunging into the relatively small field of brawler/RPG hybrids. Dungeon Punks manages to be entertaining in spurts, and is a long way from the worst beat-em-up/RPG melding that exists, but its technical issues make persevering with the adventure quite a chore.

Upon beginning the game, the player picks three of the six possible characters. One of them is under direct control while the other two stay on the same screen and help with tackling enemies. As the game progresses, the other three characters not chosen at the beginning are made available, and can be freely switched between during every altercation. Only after every character is downed does defeat occur, and it takes the form of paying a resurrection penalty in the form of some experience with no further consequence. The AI of characters not under player control is less than brilliant, but is certainly good enough to make them helpful instead of worthless.

Before any fighting takes place though, Dungeon Punks will freeze for a long period in its initial startup. It will continue to freeze throughout playing the game, with no consistent pattern. A beat-em-up is not the type of game in which one can wander away from the screen while waiting for the freeze to end, meaning the player will have to sit staring at the halted moment for long periods until action finally resumes, only to freeze again shortly thereafter. Playing in the same area repeatedly does seem to reduce the number of freezes, but they never stop, and this egregious technical issue is an enormous hurdle to jump when seeking enjoyment. Freezes are not limited to combat areas either, popping up when dealing with equipment alteration or in place of a standard loading screen when transitioning elsewhere. 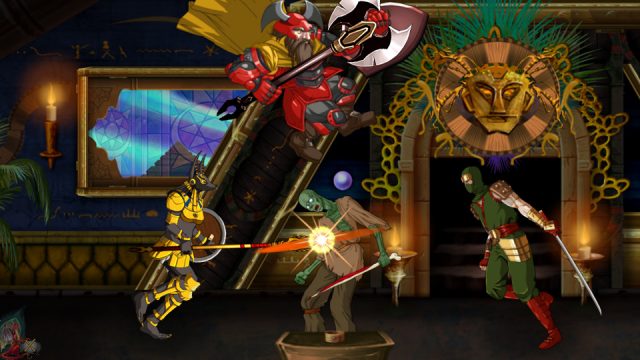 It’s kind of a shame that the ninja never joins your team because he’s too cool. Buried meaning, perhaps?

As a beat-em-up, Dungeon Punks is solid. It has a good variety of enemies and employs relatively little palette-swapping to increase their ranks, along with each new area presenting something unique to differentiate it. There is a lack of variety between the characters, as all of them use the same three-hit combo and are only distinguished by having unique magic spells and counterattack moves, but beating up adversaries remains diverting throughout.

Dungeon Punks is not a strict beat-em-up though, and its RPG elements make things somewhat grindy. Leveling in and of itself does not help a great deal, though the souls that depart defeated enemies strengthen the characters’ statistics steadily instead of only when a level is increased. Leveling up is essential to kitting out the characters though, as all equipment has a strict level limit. This equipment also cannot be changed save back at home base, and the difference between each piece is significant enough to make changing it regularly a critical aspect. While foes drop a few pieces of equipment, getting the whole team able to handle the current opposition will require using emergency exits a few times to build up funds, which considerably stretches out the play time. When fighting enemies, inventory is so simplified in order to have one button take care of everything that characters cannot simultaneously hold healing potions and items for summoning temporary battlefield assistance, with one or the other being tossed back onto the ground when this is attempted. These items cannot be purchased and are exclusively available as drops from enemies, making the ability to use them somewhat unpredictable.

The narrative takes up very little of the game’s time, showing up at the end of each area. It depicts a mercenary group of which the player’s characters are part going on a succession of missions to try paying off debt run up with royalty members who are too terse when announcing assignments. This sits alongside a zest for profits by the corporate bad guys that eventually results in an attempt to maximize insurance premiums while minimizing expenditures on the benefits. A nugget of an interesting idea is present in the form of Rezcorp, the in-game insurance agency responsible for reviving the party whenever it is slaughtered, but the notion is not explored much except through a multitude of corporate slogans that appear on loading screens. The text is generally well-written and loaded with attempts at humor, but none of the characters is memorable and the scenarios come across as a series of crises without enough context to make sense. This is in keeping with the usual framework of a beat-em-up however, not a genre known for its writing. 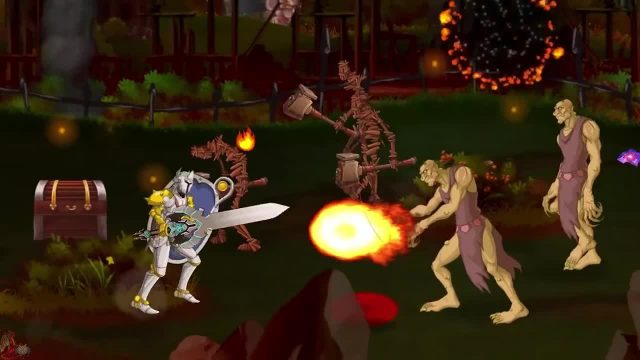 In case this still image isn’t enough to examine, the game will provide umpteen others while playing!

The nice sprite work of Dungeon Punks is easy to appreciate thanks to the multitude of freezes that give the player nothing else to do, but Hyper Awesome did a good job making movements fluid and interesting to behold. The few story scenes are less impressive due to the use of still illustrations that zoom in and out, though the artwork is solid. A total of eleven credits for music appear upon completing the game, and listening to the work of this sizable group is made easy when the soundtrack continues to play during freezes. Most of the music is unobtrusive and pleasant without being memorable, though a composition in the later game is reminiscent of Jerry Goldsmith’s work on Alien. Sound effects are solid but annoying due to the possibility that they will be heard for several seconds after a freeze has taken place.

In spite of the irritations, I have a bit of affection for Dungeon Punks — it let me ride on a gorilla, after all. I can’t overlook just how much time I spent waiting for its freezes to end though, and without a fix for that it’s impossible to give a recommendation. No arcade cabinet which experienced constant technical trouble would have gotten enough business to justify its existence, and the ability to play online with friends doesn’t help much when everyone will be cursing the constant dead space.