Drakengard represents an attempt to create a 3D beat-em-up with plentiful RPG mechanics, a laudable goal with a finished product that developer Cavia needed to fine tune for optimal results. The narrative is unusually strong when judged against beat-em-ups, and its bloodthirsty nature is refreshingly unique in the annals of Japanese RPG storytelling. The game itself unfortunately demonstrates how risky it can be to lengthen a beat-em-up title past a couple of hours, especially when it lacks top-notch mechanics to sustain interest over a long span.

Drakengard begins with a man named Caim heedlessly slaughtering scores of imperial troops in a rush to save his sister, who happens to be their target. Caim’s recklessness results in multiple wounds being inflicted that will shortly render him dead, a fate he avoids by hurriedly making a pact with a dragon the imperials have tied up and abused. With the power of a dragon at his disposal, Caim is able to kill even more than before in an attempt to avenge his parents. Killing by the thousands is not necessarily enough to prevent the imperial goal from being achieved, but this protagonist’s bloodlust is such that he’ll do it anyway.

A Mature rating was slapped onto this game, and aside from its Mortal Kombat-esque blood diffusions, the story is why. Square Enix’s localization obscured certain subjects, but Caim’s incestual relationship with his sister can still be inferred, while child abuse suffered by an antagonist is also a key element. This material could easily have been elaborated upon, but doing so would have likely restricted the audience due to publisher and retailer squeamishness. As it stands Drakengard gets points for addressing things very rarely seen in video games, but a great deal more time could have been granted to fleshing out the world instead of making players research it elsewhere.

Two core types of missions exist: flying and ground-based combat. Caim will frequently take to the sky on his dragon, shooting down multiple adversaries in adventures clearly influenced by the Panzer Dragoon series. Cavia did not simply rip off Sega’s mechanics, and unfortunately the differences are mostly for the worse. This dragon needs to turn its head in order to face its enemies directly, and those adversaries are often fast enough to make targeting a chore. Instead of flying along a set path this dragon has free reign of the landscape, which generally results in passing enemies and needing to turn around for their elimination. The single worst decision Cavia made for these flight missions has to be making the left analog stick control both the dragon’s movement angle and its targeting reticule, an exercise in frustration made even worse whenever the game decides that a certain enemy is so obviously the correct target that the player has tremendous difficulty getting the motion vector to go anywhere else. Some enjoyment can still be had from swatting a multitude of foes out of the sky, but the controls make doing so much more obnoxious than pleasant. 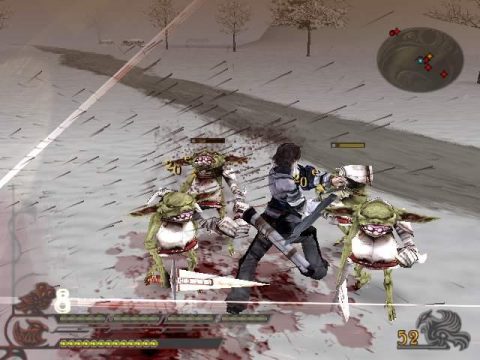 The only reason these are goblins and not gremlins is because they can stand direct sunlight.

Most of the ground-based missions also have the option of Caim leaping onto his dragon, a vantage point that allows him to rain fiery death upon the helpless foes. This is ineffective if any archers are among the adversaries, as just two hits will force the dragon to fly away for a time and make Caim deal death individually instead of wholesale. While there is an occasional goal of simply reaching a location, most of the time completing the ground missions requires the execution of numerous adversaries who are surrounded by friends unwilling to stand idly while Caim does his killing.

The actual means of dispatching foes is spiritually akin to Golden Axe, though a few twists are present. Combos serve a useful purpose by generating health refilling items and extra experience, so plunging deep into a group of enemies and swinging furiously can often pay off handsomely. Experience only increases HP for Caim and attack power for the dragon, but both of those are handy things. Most missions have time limits, but they’re generally lenient enough to not be a major concern. Caim can carry up to eight weapons into battle from a stockpile considerably larger, and the weapons each have a distinct attack range and speed when employed that can significantly alter the feel of battle. Each weapon has a level from one to four that is increased by using it to slay huge numbers of enemies, and the implements of death also have unique magic attacks that further differentiate them. The arsenal is a highlight of Drakengard, since it is sizable and varied enough to make finding something to suit individual preference quite easy.

What will often enrage the player is Cavia’s method of camera placement, which seems designed to infuriate at every turn. The camera’s position is ostensibly set for behind Caim’s back, though close enough to his position that spotting incoming trouble is a problem. Whenever Caim moves, the camera holds whatever position his back originally occupied until he is stationary again, a recipe for instant frustration when survival depends upon aiming the right direction. The right analog stick can be used to temporarily alter the camera’s placement, but it instantly returns to the default position when the stick is let up. In outdoor areas the camera usually manages to just barely be adequate, but the occasional indoor mission finds it constantly getting impeded by walls or columns, and the usual result is taking repeated enemy hits until proper orientation is finally achieved.

Drakengard‘s difficulty does not generally reside in its enemies, which have easily-distinguished patterns that can be exploited. Instead it resides in fighting the camera to properly view those adversaries. Huge quantities of enemies litter most of the missions, but they won’t pursue Caim very far, and chopping up smaller groups without interference is easy. The game also allows players to stop advancing the story in order to replay missions for extra experience, or to discover additional areas that can lead to very different conclusions. Accessing the fifth and final ending will require a significant time expenditure, but the other four can be reached with less than twenty hours total due to the game allowing players to experience missions individually instead of playing the entirety each time. This is fortunate considering how monotonous some of the missions can become, demonstrating why most beat-em-ups are short games. 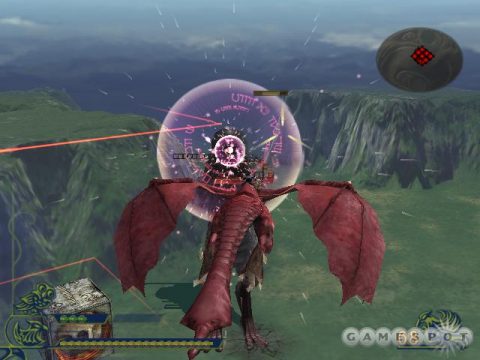 Truly a brilliant dragon, one with movement and targeting controlled simultaneously by the same stick!

The FMV sequences of Drakengard are quite visually appealing, but the game itself doesn’t catch the eye much. Character models are somewhat drab, the landscapes repeat similar graphics, and a muted color scheme restricts the aesthetic appeal. The sheer number of enemies onscreen is theoretically impressive, but they don’t pop into visibility until the player is fairly close. That makes relying on the radar vital for navigating large maps, except when characters start talking to each other, which temporarily displaces the icon until their dialogue is over.

The voice acting is well done and conveys the characters well, with certain instances coming across exactly in the creepy way cavia intended. The music is a bizarre experience in which multiple symphonies of renowned composers are cut apart and sampled. The effect comes across as rather repetitive more than anything else, due to the penchant for playing a single chord far too many times in rapid succession before something different finally appears. Half the time hearing the music over the sounds of Caim dismembering his opposition proves difficult, and it’s for the best.

Drakengard‘s narrative is grisly enough to maintain interest, and playing the actual game is fitfully enjoyable in the same way many older beat-em-ups were. Its arsenal’s size presents a handy method of keeping combat somewhat fresh, and the RPG elements serve useful purposes. More than the monotony to be found in the game’s missions or the incompletely realized potential of its narrative, constantly battling the camera and cursing at its stubborn inadequacy will cause the most frustration. Beat-em-ups in 3D have a ragged reputation, and this one demonstrates why in no uncertain terms.