Back in 2013, I had the pleasure of co-writing a review for RPGamer with Adriaan den Ouden for a game that spun some exceptional controversy. The game in question, Dragon’s Crown, brought up numerous conversations regarding sexual imagery and sexualization of the female heroines. Despite those disagreements, Adriaan and I couldn’t deny that the game was fun. It was over-the-top, utterly ridiculous, and pure entertainment. Atlus USA and Vanillaware decided to re-release the game as Dragon’s Crown Pro for the PlayStation 4, though if I’m being honest, it’s the same damn game from 2013, and while little is new with it, it’s still a gem.

Dragon’s Crown is the journey of Dungeon & Dragon archetypes as they roam through stages beating up baddies, capturing treasure, and defeating larger-than-life bosses, the titular goal being to acquire the “Dragon’s Crown” and ensure that the world does not fall into chaos. Although the story is bare-bones and unimpressive, the dialogue and narrator are still stellar. It’s always amazing when a good narrator can transform a bland story into something intriguing. It’s just a shame that story has nothing for the player to feel invested in.

Gameplay-wise, however, there is much to get invested in. Players can choose from six different characters, each with their own unique play-style. Furthermore, players can have up to four player co-operative play, either locally or online. Online play for Dragon’s Crown Pro is very smooth, without any hiccups to speak of. Couch co-op continues to be an utter joy. Those who played Dragon’s Crown on PlayStation 3 or Vita can import their save file into Pro, which will give veteran players the ability to continue the game on higher difficulties. While exploring many of the dungeons, players can collect corpses of fallen heroes that they can resurrect in the town sanctuary to supplement their party line-up should they not go the online route. 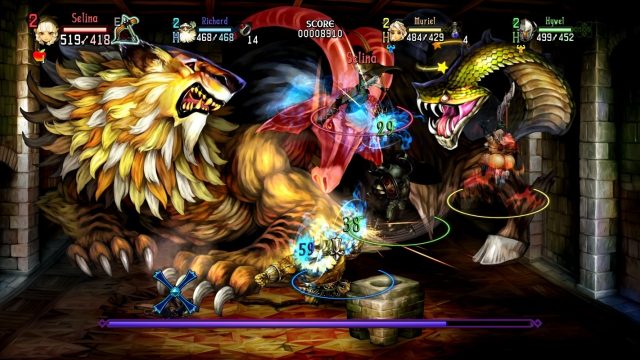 That is one pissed off chimera.

Combat is a frantic and fast hack n’ slash experience wherein enemies can come from all sides and the player character must be able to handle all incoming bogies. Playing on your own is challenging, but having multiple players during the dungeon crawl is a riot. Every class plays uniquely, each with their own unique skills that can be upgraded after each level up. For example, the Wizard can manipulate wooden boxes to create additional help during combat, while Dwarves can throw enemies twice their size, making it look effortless. Replaying the game with different classes is a lot of fun, but it doesn’t truly change the experience.

As players level up their characters they can allot skill points back in the main hub. The hub offers opportunities to take on quests that provide experience points and unlock bonuses for the player’s character, have items found in dungeons appraised, resurrect dead bones found in dungeon crawls, and purchase runes to strengthen magic. Runes exist in every single dungeon and can be interacted with to create changes within a location or provide extra support such as buffs, debuffs, and other bonuses to players, like getting more gold at the end of a level. Some runes exist to help with puzzles in the dungeon or even finding hidden treasure. This extra level of interactivity is great, though one issue is that it’s a bit tricky to trigger them, especially when there are plenty of baddies in the way. 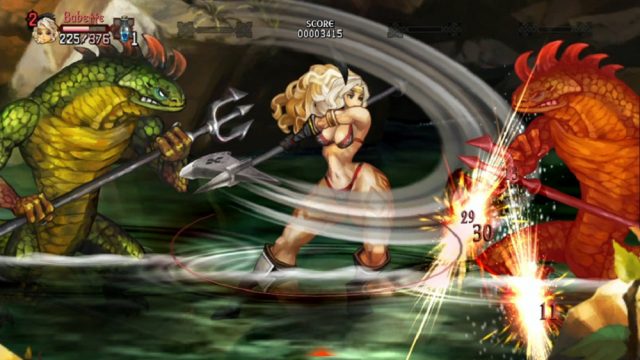 Amazon is still the best class in the game.

It’s worth noting that Pro‘s online experience is far superior to that of its incarnation from 2013. Throughout my experience I constantly had people jumping into my sessions without any noticeable hiccups, and when I started online sessions to play with friends, everything felt seamless and well implemented. I didn’t experience any slowdown or crashing during my online sessions, something which did happen to me frequently back when Adriaan and I played it in 2013.

In terms of audio and visuals, not much has changed. There is a new 4K resolution option for players who are lucky enough to have a 4K TV, though those of us running 1080p will still notice an upgrade in the sharpness and quality of a lot of the graphics, backgrounds, and character designs. The animation is still as lovely as ever, though given there’s been no real changes to the game, there’s still some moments of gratuitous sexual content in some of the cut scenes. The monk in the spread-eagle position always comes to mind. While the sexualization of some of the female characters in cut scenes may not bother some players, it’s worth noting for those who may be uncomfortable with such content.

Meanwhile, Pro’s soundtrack has been completely revamped and done by a live orchestra, and this is very noticeable. While the tracks are still not the most memorable, the sound quality definitely takes a much more dramatic approach and feels much more pronounced than its vanilla version.

I think the largest issue with Pro is its price point. Those who have played Dragon’s Crown in the past will not find anything new here other than it being on a different console. While it’s a solid game through and through, it’s hard to recommend given this game released in 2013 and it’s essentially the exact same title from before. There’s just not enough new here, and if the price was a bit lower, I feel like there would be more of an incentive to grab Dragon’s Crown. As it stands, Dragon’s Crown Pro is a great title to play with friends, but if you’ve played this once before there’s not going to be much to draw you back in for a replay.