Dragon Quest VII: Fragments of the Forgotten Past Review

No World Is an Island

My take on the original PlayStation version of Dragon Quest VII was a long way from positive. The presence of Dragon Quest VII: Fragments of the Forgotten Past represents a chance to improve something that wasn’t executed very well the first time, and this opportunity was fortunately realized. This is still not a game that will entice anyone who has never liked the series, and the litany of potential fixes Square Enix could have made did not come to be. Nintendo’s 3DS is most assuredly the platform on which to play the seventh Dragon Quest however, and I found myself appreciating it quite a bit more this time.

A single island appears to be the entirety of the world’s landmass, but Prince Keifer is bored enough to go exploring the ancient ruins, and he gets the silent protagonist to go along. Thorough investigation eventually reveals a means of reaching a different island, and the hero’s friend Maribel joins to make a trio that explores this place, which turns out to be located in the past. Upon resolving the difficulties of this new island, the trio return home and finds that the same landmass has appeared in the present. The group subsequently finds more islands with troubles that appear in the present world upon resolution of their difficulties, and performing this service takes up the bulk of the narrative.

DQVII‘s climax and the lead-in to it involve a central plotline that is referenced from time to time, but most of the game is devoted to exploring the past and present versions of new lands around the world. The scenarios of each location tend not to overlap, and they do not even take place in the same time period, but are nevertheless interesting to experience. Such tribulations as a town’s inhabitants all being petrified, or a ruler seeking overwhelming power to avenge a horrible childhood incident, manage to hold the player’s interest effectively. DQVII‘s use of time travel is bizarre, as the liberated lands seem to have existed in a vacuum for centuries until they magically appear in the present day, but the individual circumstances of each new land keep things engrossing in an episodic fashion.

The narrative’s basics haven’t changed much from the original version of the game, but the 3DS’s localization is an enormous improvement. Similarly to the remake of Dragon Quest IV on the DS, a variety of dialects have been included to differentiate the areas from each other. Some of these are not an ideal fit for a text-only game, but the effort is appreciated and coincides with a much more effective rendition of the narrative. Party chat has also been expanded from the original game, and while what the characters have to say is rarely revelatory this makes them more memorable. 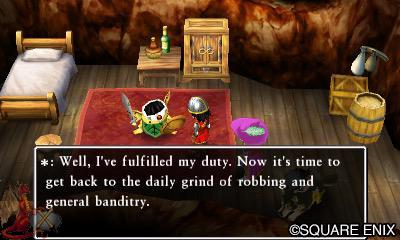 So letting him continue to be a bandit is a heroic act? Apparently!

Fighting proceeds in the time-honored Dragon Quest tradition of turn-based battles. In the early going, the game doesn’t offer a great many options other than standard attack and defense. Once the ability to change classes is introduced that lack of battle variety is a thing of the past, but this rendition of the game unfortunately keeps that helpful location locked away until a significant stretch of playing time has already passed. On the other hand, this remake’s use of visible encounters in the vein of Dragon Quest IX frequently makes it easier to seek out specific adversaries. Dungeons were not really designed with visible encounters in mind and often feature opponents that are impossible to maneuver around, but a couple of means exist to temporarily remove enemies from the area so that progress can be made.

VII‘s class system may be found after a sizable amount of time has passed, but the enormous gamut of options it provides can make the rest of the game simple to conquer. A great time commitment is still required to master the prerequisites for the strongest classes, but the number of fights needed to advance in a career has been noticeably shortened for this version. Identifying enemies that will further job progression instead of wasting time can still only be done by talking to a specific NPC, and switching career paths still demands heading back to a set place, which means that a substantial amount of time will still be taken up traipsing back and forth whenever someone is ready to take on a new occupation. An easily-reached location with new, admittedly unimpressive, dungeons full of enemies that give steady class progression points helps make any early job grinding more efficient, and helps make the class system more manageable than the original rendition.

Unlocking new locations in Dragon Quest VII requires picking up shards around the world that combine to reveal heretofore-unknown lands. Finding these shards in the original game required hunting around every possible location, but this remake helps out somewhat by supplying an indicator on the touchscreen that glows when near one of these vital items. This map will even display a shard if the party is on the same screen and the item is in the open, greatly streamlining a stumbling block. Some of the shards still demand the performance of long fetch quests or other services to NPCs before they will be relinquished, but at least with the indicator it is possible to narrow the search parameters. 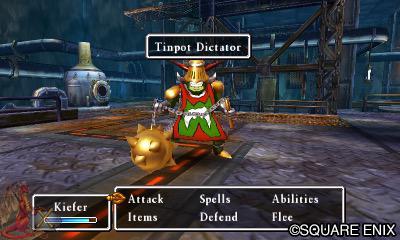 Brass or copper, sure, but tin? Maybe he painted it.

Inventory remains a somewhat tedious process even in this version of Dragon Quest VII. Moving things between the characters is not quick, yet it is necessary due to individual inventories. The bag for excess items is invaluable, yet shifting its contents to the party members is not a swift process either. Equipment that produces an effect in battle still gives no indication as to what that effect will be. It is possible to buy new items for the inventory of a party member whose personal stock is full, but only by tossing everything not equipped into the bag. New functions found on the touchscreen show shop inventories before entering the establishments and handy maps of the towns and dungeons, which are useful but not a complete substitute for revamping the series inventory system. A neat addition is the insertion of treasure chests on the world map, which gives an incentive to fully explore every area outside of dungeons.

A dramatic improvement over the original release is seen with this remake’s visuals. Akira Toriyama’s character designs are immediately identifiable from the nice graphical work here, and his intriguing monster designs are given full rein to demonstrate a variety of interesting animations during combat. Characters actually look different depending upon the current job choice, and the costumes for each occupation are resplendent to behold. Koichi Sugiyama’s score could still use a few more compositions, as certain tracks are heard too often over the game’s course. The sound quality on 3DS is nevertheless stronger than the original PS1 score, and sustains player interest a bit better.

Even at the fastest possible clip, Dragon Quest VII is likely to need sixty or so hours to complete. Tackling every possible thing the game offers will send the time spent with it to two hundred hours or more, but there is no need to attempt such a thing unless one is genuinely obsessed. This version succeeds in feeling more engrossing than the PS1 original, but is not worthy of spending MMO-like time upon. The difficulty after class changing is unlocked varies drastically depending upon how the player makes use of this feature, but the series tradition of merely losing half the current stock of gold upon defeat ensures that overstepping the party’s current abilities will not be a disaster.

Dragon Quest VII is still not a favorite of mine, but this remake left me feeling much better than the original. Its storytelling is far from the potential it could grasp, but each of the scenarios presented manages to be interesting. It’s not a good idea to have this be someone’s first Dragon Quest, but anyone prepared for a serious commitment will find Fragments of the Forgotten Past to be a solid choice.