Ride from the Ocean Floor to the Clouds

When it comes to monster collecting games, it’s no secret that Pokémon is the undisputed king of the genre, but one of Japan’s other top-selling series, Dragon Quest, has steadily released a half-dozen main Monster games over the years, plus multiple remakes and otherwise enhanced versions. Dragon Quest Monsters: Joker 3 released in Japan on March 24, 2016, for the Nintendo 3DS with over 450 monsters to scout and synthesize in a futuristic, sci-fi setting.

Joker 3 is set in a broken environment. There is no round planet with continents and oceans; rather, floating continents exist far apart, with smaller floating islands between them across vast empty space. Above this all hovers an ominous dark sphere, seemingly the source of all problems. Like any good Dragon Quest game, the plot is relatively simple on its surface: there’s something bad, go take care of it. It’s the compelling episodic stories on each continent that make up the bulk of the game time, with the overall plot doled out in small pieces after the boss of each continent is defeated. Local NPCs come alive with their problems and requests, inexorably drawing you in and pushing the overall narrative along. While the decent overarching story has some small plot twists and revelations, Dragon Quest Monsters games aren’t played for the story, they’re played for the monsters. 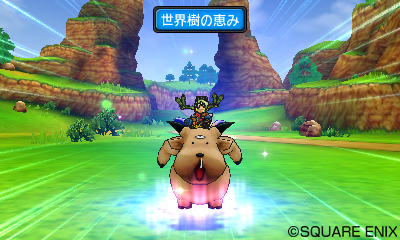 Ride any scouted monster in the field and into battle.

Dragon Quest Monsters: Joker 3 has a lot of monsters. Western fans of the series will be hard-pressed to recognize a little more than half of them though, as quite a few are from games unreleased outside of Japan, with monsters introduced in Japanese-exclusive MMORPG Dragon Quest X making up the bulk of these. In fact, upon defeat of the final story boss, the end credits include a list of all the monsters discovered, broken down by which game they initially appeared in. The Dragon Quest X list goes on for a while. It’s not a big deal, because new is fun, but where the game starts to show some cracks is in the vast amount of reskins of monsters. There are a good half-dozen versions of the iconic Dragon Quest slime such as red, blue, and yellow, plus corrupted versions of them that look like they’re half-slime/half-black-and-purple-rock. The bosses of each continent, who themselves are often just larger versions of regular enemies, also show up towards the end of the game in a boss rush as new corrupted versions, extending this gimmick to double the amount of bosses previously seen. One would think with 30 years of monsters to draw upon, there’d be more variety in the offerings in Joker 3, but sadly not.

However, this shouldn’t be a deterrent, because the core of Dragon Quest Monsters games isn’t to just go out and catch them all, but to synthesize them all. Similar to the demon fusion concept in Shin Megami Tensei games, many monsters aren’t found out in the wild to scout and recruit, but must be synthesized from other monsters. This ability becomes available early in the game and replaces a mechanic found in most Dragon Quest Monster games where monsters were either “+ or -” or “♂ or ♀” and only opposites could be synthesized. In Joker 3, any monster can be synthesized with any other monster. There is very little guesswork involved as all five choices can be seen clearly before synthesis happens, along with estimated stats. There is even an easy search tool that finds all synthesis combinations available based upon monsters obtained. It’s quite easy to blindly move up the ranks from F-ranked monsters to A-ranked; however, finding the proper syntheses for S and SS-ranked monsters is near-impossible without a guide or some amazing luck.

When monsters are synthesized, the resulting new monster inherits skill trees from its parents, leading to an interesting new game mechanic. Synthesizing monsters with maxed-out skill trees can potentially cause an evolution in which skill trees become upgraded upon synthesis, or even cause brand-new skill trees to emerge. For example, evolving a dragon’s maxed-out skill tree will allow the new monster to have access to an upgraded fire breath skill tree, which can be maxed out again for an even more powerful one. Synthesizing fire breath and frost breath skill trees grants access to an even more powerful breath attack skill tree with both fire and frost properties. There are countless combinations to tinker with and try out. 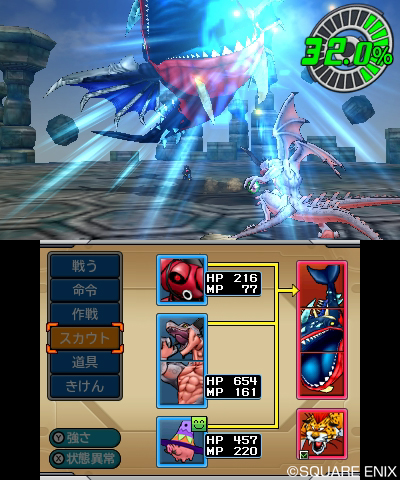 Similar to other Dragon Quest Monster games, newly synthesized monsters begin at lowly level 1. However, Joker 3 provides an easy way to quickly raise those monsters’ levels early on in the game without a long grind: farming metal slime-family monsters. One metal monster kill is typically worth several random encounters, but in most entries they’re far between and run away often. Joker 3 grants early access to a metal haven of monsters, complete with fairies that will double or quadruple the experience for battles. Late in the game, when monster riding allows exploration of the farthest reaches of this area, it’s quite possible to take newly synthesized monsters up past level 30 with just a couple of battles.

While guaranteed metal monster encounters are great, they pale in comparison to what’s arguably the best new gameplay mechanic Joker 3 offers: the ability for the hero to jump and ride any monster. Players don’t know what they’ve missed by only walking around in previous titles until they’ve been able to hop on and ride any one of their monsters. Monsters come in three categories — land, sea, and air — and allow players to quickly traverse vast expanses, fly through the air, or dive underwater. This is something no other Dragon Quest before has allowed and it’s quite a shock to go back and play older games afterwards, realizing walking is the only option. Having the whole sky and underwater area accessible also allows each continent to feel multiple times larger.

While Joker 3 flies high on one new game mechanic, a major change to another falls completely flat: healing spell cost. While healing spells in RPGs typically cost more to cast as they get stronger, Joker 3 exponentially increases this to a ridiculous level. It’s a balancing issue that creates healing problems early and keeps healers from being any sort of effective offensive weapon. Previous Monsters games allowed players to balance out skills for each monster, but with healing costing so much in Joker 3, a dedicated healer is almost a necessity. 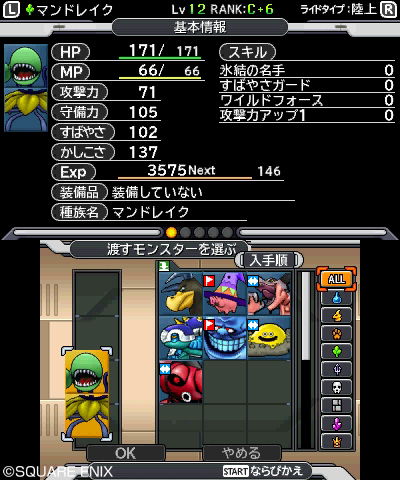 Weigh the costs and benefits of monster sizes when forming a 4-slot party.

The battle system for Joker 3 is a standard old-school turn-based affair with players having up to four monsters lined up against a row of enemies. Players have the option to directly take control of combat, or let the customizable AI take over. The human hero party member doesn’t fight, but can use items once per turn to affect a variety of things. The visuals in battle are amazing. Monsters are constantly in motion and there are appropriate animations for every attack, skill, or spell cast. Status afflictions are obvious at a glance, while the close-up views show the impressive level of detail given to each monster.

The music for Joker 3 isn’t vastly different from any other Dragon Quest 3DS game, which is a good thing. Koichi Sugiyama’s score is a blend of tracks from older Dragon Quest games and original compositions. They sound great on the 3DS speakers and fit each situation or surrounding beautifully. The sound effects for events such as finding a treasure chest, sleeping, or scouting a new monster are the familiar Dragon Quest ones that have been in every game of the series. Despite the more sci-fi nature of the plot and setting, the music is purely classic Dragon Quest.

The visuals are hampered only by the hardware limitations of the 3DS, but are enhanced by the 3D nature of the landscape. While Joker 3 doesn’t use the handheld’s 3D function, the level of detail more than makes up for it. Anything that can be seen in the sky can eventually be flown to, and any body of water can be fully explored above and below the waves. The monsters seen on the field fit right in with their locales and not only react to the player’s presence but also interact with the terrain and each other.

Dragon Quest Monsters: Joker 3 and its subsequent Professional version have been confirmed to be the end of the Joker subset of Dragon Quest Monster games, but with the popularity of the Dragon Quest brand in Japan, they’re likely not the last Monster games we’ll see from the series. While the game does offer some great new gameplay elements and quality-of-life improvements to the synthesis system and the ability to speed up the turn-based battles, Square Enix dropped the ball in spending too much time with reskins and slight variations of so many monsters. Pokémon entries have offered 700+ unique monsters in their games for years. A monster-collection game released in 2016 shouldn’t have nearly half its monsters simply being reskins of others. After completing Joker 3 in about 40 hours I hadn’t seen all there was to see, but it sure felt that way. 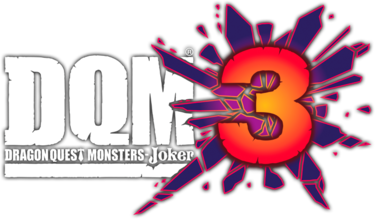