Future Generations Are Not Thankful

I wasn’t expecting much from Dragon Ball Z: The Legacy of Goku, but I knew that as a onetime Dragon Ball fanatic sampling the thing would have to happen one day. This was one of the early Western-developed games in the vast pantheon of the license, and reputedly Webfoot Technologies got better with practice. It had nowhere to go but up after this insulting flotsam hit the market, that’s for sure.

The Legacy of Goku purports to adapt the entirety of the Z series from Raditz’s appearance up through the destruction of Namek. That nearly 100-episode span covers a lot of territory, and anyone with no knowledge of its events will be flummoxed and confused constantly in this game. The plot sequences in Legacy of Goku take up less than ten minutes in total, and fail completely at acclimating anyone unfamiliar with the series to its ways. Dragon Ball initiates will meanwhile take great offense at the gigantic swathes of story eliminated by focusing exclusively on Goku’s escapades, and the jaw-droppingly idiotic filler additions will incense them further.

During this stretch of the Dragon Ball Z story, Goku is mostly in a tearing hurry to reach his friends and save the day. For some reason Legacy of Goku instead shows him meandering around the outdoors and performing such leisure activities as helping children gather flowers to wile away the time. For a game that can be completed in under four hours to have so much blatant padding is perplexing, and it will further mystify those with no knowledge of the series.

These fetch quests may be blatant filler, but many of them are mandatory. Finding misplaced magazines and guiding a stray cat home are actually rewarded with experience, usually more than the enemies in the area are bequeathing upon death. The aggravation of these fetch quests may not be completely worthless because of this payoff, but it doesn’t make up for how out of place and inappropriate that content is. 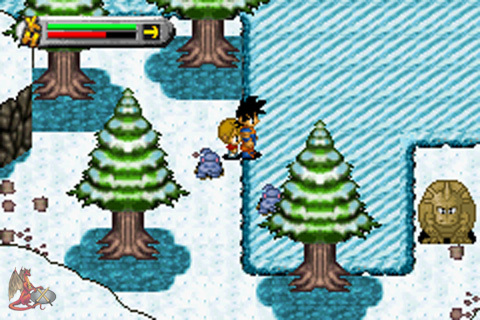 Look at all those wolf corpses – Goku’s been busy today.

At the beginning of the Dragon Ball storyline, Goku was capable of superhuman feats and knew no fear for his safety. After years of growing exponentially stronger through fighting ever more powerful adversaries, in Legacy of Goku he dies from a few wolf bites. How Goku ever expects to defeat opponents capable of obliterating entire planets when a single wolf can rip him apart is one of the unanswerable mysteries of the universe.

In addition to its terrible rendering of the source material, the game as an action RPG is a broken mess. Goku’s physical attack has such a miniscule range that it is impossible to employ without being counterattacked immediately. Fortunately he can simply use Ki attacks to hit from a distance while walking away from the enemy when it eventually pursues. The constantly recharging Ki meter makes this tactic applicable everywhere, and all enemies behave in the same manner so as to remove any thought whatsoever. A few can fly over obstacles, and bosses have their own Ki attacks that need to be dodged, but the same tactic will work against both Frieza and the dinosaurs at the beginning of the game. It can take a surprisingly variable amount of time due to Goku’s attacks dealing inconsistent damage, but with enough patience the result will not be in doubt.

The problem with dodging enemies comes from trying to successfully skirt obstacles in the environment while running away. Someone at Webfoot must have had a grievance with moving diagonally, because Goku is limited to only four directions. This makes clearing numerous passages far more troublesome than it needs to be, on top of the visuals being downright deceptive as to what is an obstruction. Based on the overhead view Goku should be able to pass behind many objects, but instead he will get caught on them if not steered with minute precision.

The way to make sure Goku can survive a pummeling after being caught on low-lying trees and pointy rocks is to constantly gain levels. A freak accident can lead to quick death from enemies, since there is no recovery period after being hit. Saving at any time would seem to remove this concern, but Legacy of Goku treats saving a little differently from most games. The convenient part is that the game fully restores Goku when the player reloads a save after dying, but in exchange for the bothersome aspect of being returned to an area’s entrance with all the enemies revived. While extremely helpful during the many instances when grinding is strongly advised, it is a puzzling occurrence. 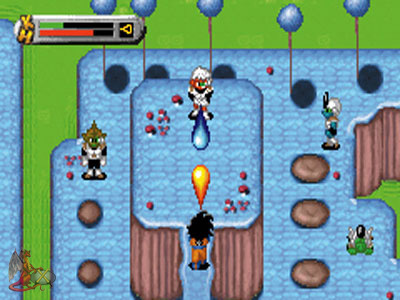 This is of course exactly how the showdown with the Ginyu Force went – except it isn’t.

Legacy of Goku came out fairly early in the GBA’s life cycle, but plenty of other games showed that the system’s visuals were capable of more than what this title presents. Environments are flat and dull, animations are minimal, sprites are tiny, and the occasional still clip from the TV show is rendered grainy on the GBA screen. The music is mostly unobtrusive and unmemorable, though a couple of its tracks are pleasantly undistinguished. Goku’s death scream stands out for being frequently heard and having nothing to do with any actor who voiced the character.

The video game record of Dragon Ball is checkered, yet even among diehard followers of the series this title’s reputation is poor. I didn’t listen to the many voices warning what this game would be like, and the only real positive of the experience is how little time I sacrificed. Check out Attack of the Saiyans for a legitimately entertaining Dragon Ball RPG experience: check out Legacy of Goku only if a masochistic urge cannot be satisfied any other way.