I DID Do It to You

Dragon Ball is a series that just keeps going, and has actually received new movie and TV material in recent years instead of subsisting on the same stuff produced in the 80s and 90s. The last time North America saw an RPG was 2009’s Dragon Ball Z: Attack of the Saiyans, but Bandai Namco has now localized Dragon Ball Fusions for the people across the Pacific. Fusions has a different feel than any prior RPG in this universe, one less concerned with recreating iconic moments from the series and more about gathering a huge host of characters to participate in glorified fan fiction battles. By that odd standard, Fusions is a success, although those with no experience in Dragon Ball matters are unlikely to take interest.

Fusions allows the player to gather an enormous number of characters to put into any number of Dragon Ball matches. It cheats a little by counting Super Saiyan versions of certain characters from the show as separate entities, but nevertheless has an enormous roster of hundreds to command. Akira Toriyama did not identify anywhere near this number of beings in the source material, yet it is to the game’s credit that the multitude of newly created personalities fit into the setting without a hitch. Many of these new personages are not exactly deep and nuanced in terms of personality, though that could be argued is also in keeping with the source material. Each one nevertheless has an individual name and a couple of sentences of biography.

Acquiring most of these characters is done through battle, where the player’s protagonist and four other teammates duke it out with opposing quintets flying around the environments as a turn order meter displays the next actor. Each battlefield is a circle or quadrilateral on which both teams smack each other around the area. In most circumstances hitting the edge of the battlefield will send the affected character flying off to take extra damage before returning to restart his or her turn progression, but in a few instances being ejected is also a means of immediate defeat. The participants have moves with differing power and ranges, and being attacked will forcibly alter the position of the victim. When someone is pushed into another character by means of attack, the victim’s collision will result in taking additional damage from an opponent or inflicting pain onto teammates. It is rather entertaining to see a character booted between every member of a team while taking damage at every juncture, though the combat system is not very strategic when it is difficult to know exactly how far the enemy will be moved by each attack.

While most of the battle essentials in Fusions are turn-based, a few action elements slip in to keep things lively. Physical attacks are always accompanied by a blocking screen, in which the defender chooses a direction within a couple of seconds that will greatly reduce damage if the aggressor’s strike hits there. Properly anticipating where an attack will land is an inexact science at best, but outdoing the AI is a frequent occurrence. Users of energy attacks can sometimes find themselves in a button-mashing war with a counterattack, though overpowering the AI is not difficult. Several types of strong attack will also produce button-mashing frenzies to do as much damage as possible in a short time, and while these are a long way from complex they do convey the Dragon Ball feel well. 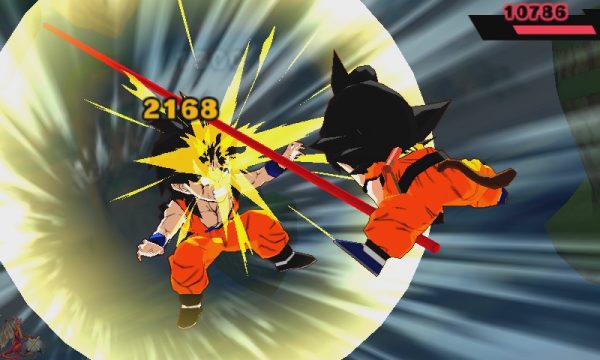 This is punishment for your goofy posturing while waiting to act, Yamcha!

Considering the size of its cast, Fusions can be forgiven for not having a lot of customization options except for the protagonist. The one players will constantly encounter is new special moves, which unfortunately take a long time to sift through and are bequeathed every time an enemy is defeated with a ring-out. Each character can have but three special moves at any one time, yet leveling up will usually reveal stronger versions of techniques that replace the outmoded ones. Sifting through the ranks of characters capable of learning skills is a tedious process, especially when it involves looking closely at each move list to judge minute improvements. The other main method of customizing the cast lies in a plethora of fusion options, making a new character out of two others. This is a reasonably interesting process which can produce powerful fighters, but also requires sifting through the huge cast at length to determine feasible options.

Fusions‘ narrative finds the player-created protagonist and his or her Saiyan best friend, Pinich, gathering the Dragon Balls to wish for a means by which all the great combatants from the entirety of Dragon Ball‘s universe can be put together and duke it out for supremacy. This results in several worlds composed of familiar Dragon Ball scenery populated by a large number of combatants, and Pinich swiftly takes off on his own to train. The protagonist meets up rapidly with Goten and Trunks from the later period of Dragon Ball Z, Pan from Dragon Ball GT, and the young Goku from the later period of Dragon Ball. This quintet is the core of events, though many other characters show up to keep things interesting as a showdown with Pinich is delayed by the expectedly nefarious motives of various villains from a multitude of points in the series.

It doesn’t offer anything to interest those who avoid all things Dragon Ball, but this narrative does feature some bizarre sights such as five-character fusions and Broly turning into a giant Saiyan ape. Its logic regarding fusions is at odds with that from the actual series, but since this is a newly-created place with multiple aspects that are outright bizarre, the topic is not a dealbreaker for fans. The core narrative is slow-paced and not terribly interesting though. Bandai Namco’s localization does it few favors by being slipshod in spots — this is most apparent when a text box is clearly not finished dispelling information, but instead of the truncated sentence appearing after hitting A, a new paragraph starts instead. Taking part in quizzes based on series events for rewards loses a lot of its appeal when the translation of certain items is suspect, making the answers hard even for those who know exactly what happened. 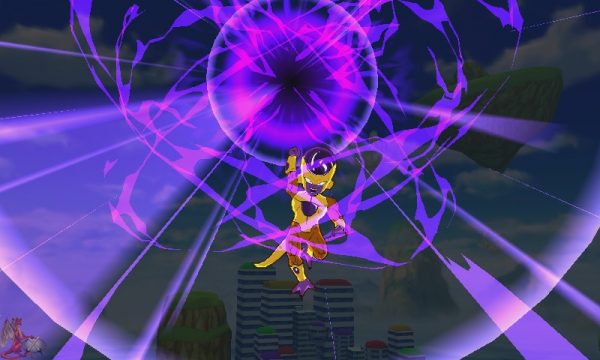 Freeza acting like it’s time to destroy a planet? What are the odds?

Using the Japanese voice cast with the translated titles for many attacks is jarring during battle sequences, but these actors have been performing the same roles for years and do a good job at it. The music is a mixed bag, with some innocuous tracks proving unmemorable while guitar-driven battle themes vary in quality. Visually Fusions doesn’t strain the 3DS, but does an excellent job of representing Akira Toriyama’s character designs.

Completing the core storyline will not be a difficult task, as the AI is easy to overpower. Side missions can offer a nasty challenge though, especially tournaments in which a ring-out means the defeat of a character. Several side missions offer the odd spectacle of Dragon Ball attempting to ape Superman on the Nintendo 64 by flying through rings, though the task is much more pleasant than in that game. Finishing the central narrative can probably be done in twenty-five hours, but attempting to accomplish everything possible will triple the time spent on this game at a minimum.

I enjoyed Attack of the Saiyans a bit more than Fusions, but there is nevertheless something compulsively addictive about ferreting out all the possible side missions and characters. This is not the very rare type of licensed game that will convert non-fans of the subject matter, but neither is it an abomination. Dragon Ball fans don’t have a great number of solid RPGs set in the universe to play, and this one manages at least that much.