Having not fully come into western RPGs until the mid to late 2000s, I have never really managed to get into the old-school-style cRPGs. Though I’ve enjoyed more modern titles that have built off them, such as Knights of the Old Republic and Dragon Age: Origins, the appeal of beloved games like Baldur’s Gate and its ilk has eluded me. That isn’t for lack of trying, but I have never got over that initial hump of understanding the complicated systems and character building that seem to be integral to the games. However, in Larian Studios’ Divinity: Original Sin II, I have finally found a game that offers a friendly enough in to the whole experience, and a game that is generally excellent throughout.

Though a sequel to Divinity: Original Sin, the game doesn’t require any knowledge of past events, or other games in the Divinity world for that matter, though it is a bonus. Players start off by customising their main character, and are given the option to have a generic backstory or take one of seven specific origin stories. Either option works well, but picking one of the origin stories provides some extra narrative and a special questline for the character. Origin stories not selected will be recruitable as party members in the first chapter, so even if players prefer to create an entirely new main character there will still be the option of some heavy character-based quests to enjoy.

The narrative starts engagingly, with players controlling a prisoner being shipped off to an island named Fort Joy in a bid to remove from society all those with the innate powers of a Sourcerer, one who wield a powerful and very hazardous type of magic called Source. Naturally, this state of being doesn’t hold for too long and players and their other Sourceror companions set out to find their freedom, though this quickly builds into something much larger. The overall story is engaging, if maybe a tad predictable at times, but Divinity: Original Sin II‘s narrative shines in its quests and the overall depth of the world. The design and writing within quests of all lengths is stellar. They can come in all shapes and can be started in many ways, some with the usual talking to NPCs, others by perhaps finding an item that leads to a deeper story when investigated, encouraging players to go out into the world and explore. All of the quests have substance to them — very rarely will players simply have to deliver items to someone — and usually many different ways of completing them with significantly different outcomes. The narrative is aided by excellent voice acting throughout the game, and the combination of top quality writing and performance is really noticeable.

It’s through these quests and general structure of the game that Divinity: Original Sin II appealed to me in a way other cRPGs haven’t. Though exploring the world is still very much the theme, Original Sin II provides enough direction that I felt comfortable with doing so without feeling overwhelmed by the potential to go off track. The game thoroughly rewards players for both looking everywhere and investing in various skills, granting extra options to learn more information or alternate means of progressing a quest. 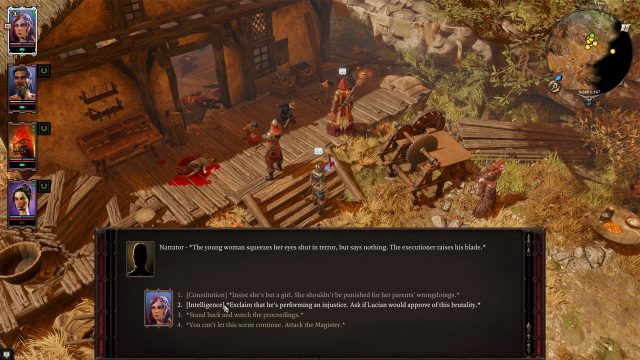 Being heroic is entirely optional.

There are a few archaic parts to the design that come as standard with many games of this type, particularly when it comes to handling loot, as well as some slightly frustrating controls. Players will receive lots of equipment throughout the game and will need to occasionally stop and spend several minutes sorting through and comparing the gear before deciding what’s best and selling off the rest. It can also be annoying when forced into post-battle conversations that have a speech check; sometimes players won’t be able to have their speech-trained character respond, even if they are standing well within earshot, thus missing out on a preferred option. There are plenty of skills and attributes to choose between when upgrading a level up, but the game is generally good at explaining what everything does and includes the option to re-spec. It should be noted that jack-of-all-trades are not particularly useful, especially with respect to skills outside battle in the late game; players will instead want to develop a party of contrasting specialists, with perhaps one specialised in lockpicking, one in persuasion, and so forth.

Though exploration and questing is certainly a huge part of the game, the turn-based combat is another area in which Divinity: Original Sin II excels. Once combat begins, in the same map that was being explored, each character appears in the order bar at the top and on their turn, assuming they aren’t prevented from doing anything through a status effect, they receive a number of action points. These action points can be spent freely moving, attacking, or using items or skills, each of which will use up points. In addition to the all-important hit-point gauge, combatants have both physical and magical armours, which must be whittled down first. Reducing the number of enemies as soon as possible is usually the best way to go about things, as all foes will generally be able to hit pretty hard.

The environment plays a massive part in how combat works, and failure to deal with the environmental threats can be lethal. Many enemies will happily spew forth potential dangers, and different effects can combine in hazardous or obscuring ways. For example, a fire spell that hits a cursed area will immediately cause the entirety of that cursed area to explode and continue burning, while dousing a fire with rain will cause steam that can hide characters from ranged foes. Status effects can also turn the tide of battle for either side and often go hand in hand with the environment. Statuses require the relevant armour to be depleted before they can take effect, but having an enemy frozen or charmed can be a huge boon in combat and a big danger if it happens to a companion. Though there is an argument that not much variation needs to be made in battle strategy across encounters, and a poorly diversified party may become easily frustrated by an enemy that resists its strengths, the variation in enemies and focus required keeps players engaged. 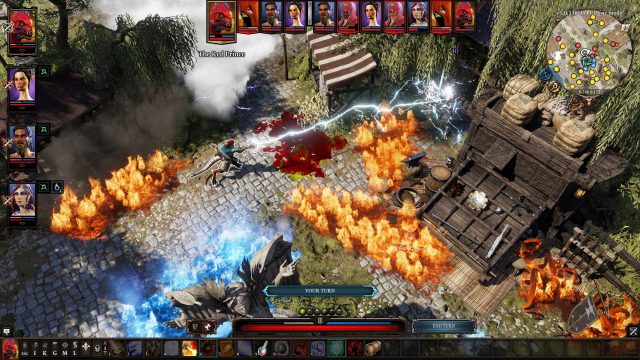 All the environmental effects of the rainbow.

Divinity: Original Sin II caters to gamers of all types with the difficulty options available, though it can’t be changed during a playthrough. Exploration Mode is certainly where those looking to get into this type of RPG should head first, as it punishes players much less for sub-optimal character builds. Being less familiar with the ins and outs of cRPGs and more interested in the story aspects of the game anyway, this is the one I went with. Even in Exploration Mode, however, the game will still provide plenty of challenges and require that players think their way through combat. Despite the many factors at play in combat, it is all handled very well within the game and on the whole very intuitive. Things happen for a clear reason, and being able to plan out a combination of skills, environmental hazards, statuses, or some combination thereof is incredibly satisfying.

The specs of the PC this was played on are not what one would call recommended, but the game was still able to be completed without too many technical hiccups; coming to the game several months after launch meant that a good number of the launch bugs had been fixed. The main issue comes whenever there are significant environmental effects, which can easily cause some immense slowdown when they start to fill up the screen on lower-end PCs. There are numerous battles where these effects play a major part, and there are enemies whose main gimmick is to add them in abundance. Even on the lowest graphical settings, however, the game looks good and the design really shines through in atmospheric locations. As mentioned previously, the voice acting is top-notch, though the music fails to really stand out. The score gives a decent backing to some key events and encounters, but aside from these it generally just blends into the background unnoticed.

A quick note should be given to the multiplayer options, though these weren’t explored during this playthrough. The game offers coop both online and local — and even a combination of the two — for the story campaign, the local multiplayer handled via split-screen if one player decides to head off somewhere else. On top of this, Larian Studios has included a Game Master mode that lets a group run their own campaigns, complete with one of the players acting as the dungeon master, and providing a somewhat tabletop-like experience.

For those looking to get into cRPGs, and even for those just searching for a great RPG, Divinity: Original Sin II is heartily recommended. It has all the virtues that fans of the subgenre have extolled and wraps them up in a way that is much friendlier to newcomers than every other title I’ve tried. Combine that with fantastic writing, a highly engaging combat system, and great design, and you have another standout RPG in a year packed full of them.