Despite competing decently animation-wise, the Digimon series of video games has never really compared with that of Pokémon, with many recent titles not even bothering to make the trip west. The decision to go in a more mature direction with Digimon Story: Cyber Sleuth, however, has paid off handsomely by creating a different but thoroughly engaging experience. Although a bit more attention to its western release from Bandai Namco might’ve allowed it to blossom further, Digimon Story: Cyber Sleuth still shines and should put the series back on the map for many western RPGamers.

Cyber Sleuth is set in the near future where a next-generation virtual-reality version of the internet named EDEN dominates. Players start by choosing either the male or female version of the main character, though this has no impact on any story or character interactions, with the other option never appearing in the game. The player character is an amateur hacker, with hackers in EDEN going about their business using programs called Digimon that appear as a large variety of creature-like forms. The player comes across a mysterious entity called an Eater that leaves the protagonist with a half-digital body, letting them move almost at will between cyberspace and the real world.

The sleuthing part of the game is mostly story-related and doesn’t crop up much in the gameplay; following the incident with the Eater, the player character is rescued by private detective Kyoko Kuremi and quickly recruited to be her assistant while investigating various Digimon-related incidents using the helpful abilities that emerge from being half-digital. Solving various cases is usually just a matter of finding the correct person to talk to, helpfully indicated with an exclamation mark, but the cases themselves frequently feature interesting little side-stories. While the overall plot itself doesn’t offer all that many surprises, it’s helped by a very entertaining cast. All of the cast members bring something to the table, and though there are some serious parts, on the whole there’s a whole a lot of enjoyment to be had. 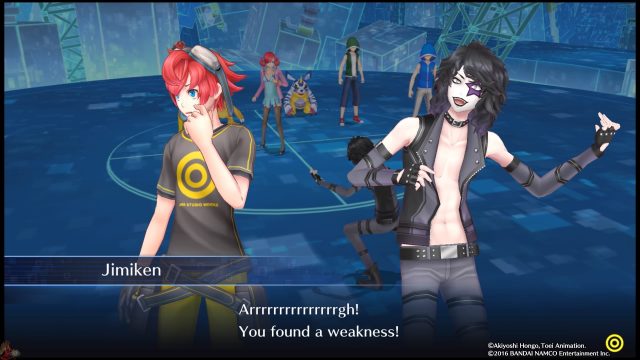 If we ignore the KISS wannabe, maybe he’ll go away.

It’s clear that Bandai Namco left plenty of stops in the organ when it came to localisation, and not just with the Japanese-only voicing. There are a few grammatical errors dotted around, and a little inconsistency or difficulty finding where it means when referring to certain place names. Admittedly, it’s nowhere near the worst job the publisher’s done recently, but enough of the little things are noticeable. Fortunately, the base story and writing is so solid that it remains enjoyable throughout. A lot of the neat touches and characterisations, like the DigiLine feature that sees human and Digimon friends send various messages to the protagonist, retain plenty of charm.

Although Cyber Sleuth has a generic turn-based battle system, it is solid and enjoyable. Players have three Digimon from their party fighting at any one time, occasionally joined by invulnerable guests, though they can be swapped out at any time at the cost of an action. The usual options are available on each Digimon’s turn: attack, guard, item, or skill. A large part of the combat is mostly about selecting the right Digimon for each battle. There are four attributes and five elements, each with different strengths and weaknesses. The game makes it obvious if an attack is going to be effective, so players don’t need to worry about remembering the exact relationships, but do need to ensure they have enough of a variety at their disposal. Provided players have a decent set of Digimon, the game’s normal difficulty doesn’t offer too much challenge, though there are a few wake-up-call bosses dotted around.

Dungeon design is the game’s weakest area. There are usually a fair few dead-ends leading to generic treasure chests but very little in the way of puzzles or pathfinding challenges. There are usually only a small selection of different encounters within each dungeon and the standard random encounter rate can be a bit high, though at least there is plenty of variation between different dungeons and the hacking skills — otherwise only used to get through roadblocks — feature options to adjust the encounter rate. 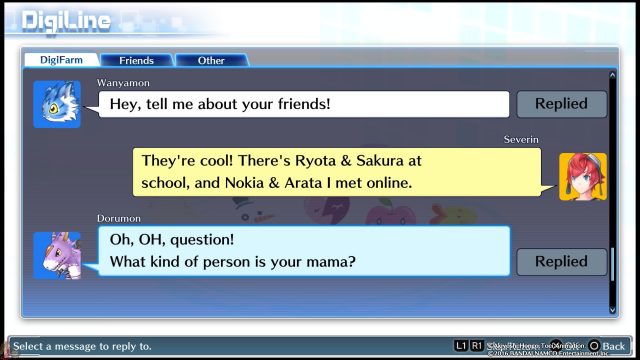 They repeat each other a fair amount, but are still totally adorable.

Most of the fun from the gameplay comes in powering up Digimon and transforming them into more powerful forms. Early digivolutions are easy and quick to attain, but getting to later stages requires a bit of thought on the part of the player, and may require de-digivolving first to help gain the necessary attributes to go further. Those not in the party still earn experience back at the DigiFarm, meaning players don’t have to focus too much on constantly rotating the party to see all the potential Digimon available. Getting new creatures is a simple matter of seeing them enough times to fill a percentage meter. In a neat touch, it is technically possible for any one Digimon to become any of the 240 available in the game, if incredibly impractical to try and do so.

The character designs from Suzuhito Yasuda, of Shin Megami Tensei: Devil Survivor and Durarara!!, helps bring a bit of style to the game. Great effort has been put in to make the locations match up almost exactly with their real-world counterparts, lending them more credibility. Generally the game looks great, and the consistently colourful palette works very well. Masafumi Takada’s soundtrack does a nice job working with the digital theme of the game, prominently working with electronica but incorporating plenty of hints from other genres such as jazz to create an atmospheric, multi-layered score. There are times where the lack of English voicing is a bit of let down and really could’ve added to certain scenes where the Japanese voicing just feels like background noise, though it has its moments.

Digimon Story: Cyber Sleuth is a game that should greatly appeal to any who were fond of the series at any point in its history, and has plenty to offer to those unfamiliar with it. Its cast, both human and digital, really bring the story and setting to life, and the game does a very good job of emulating the appeal of monster collecting and raising that the Pokémon series has mastered. There’s plenty of room for improvement, but Cyber Sleuth has deservedly put Digimon back into focus in the west.