Ain’t Got Time to Bleed

Crimson Shroud offers the opportunity to see what Yasumi Matsuno would be like as a DM in absentia. For a relatively short game its mechanics are rather intricate, and the narrative it relates is fascinating. Playing a tabletop game alone is not necessarily a desirable task, however. Crimson Shroud‘s rewards are limited by that caveat.

Crimson Shroud‘s narrative is told in flashback, as an injured Frea is interrogated by a man with an indeterminate agenda. Frea is the steadfast companion of adventurers Giauque and Lippi, and their trio was hired to seek out a relic on behalf of shadowy forces. Locating the relic would supply ample ammunition regarding the introduction of magic into the world, an ability enabled by things called gifts that were first mentioned a thousand years prior and are critical to the power structure of elites in the present. Things did not go according to plan as Frea turned up injured and separated from her companions, and learning what transpired is an interesting undertaking.

This tale is told as if it were a Choose Your Own Adventure book, making constant use of ‘you’ in reference to the player while text appears in prose and the character dialogue is clearly differentiated by quotation marks. The story proceeds in the same way with no ability to alter its flow, however. Most of the topics brought up by the game are intriguing enough to warrant further exploration, should Matsuno ever revisit this locale. The localization is literate and involving, giving the rather intricate realization of this world plenty of verve.

Outside of its plot, Crimson Shroud demonstrates tabletop mechanics frequently. The combat is turn-based, but a multitude of actions are contingent upon rolls of the dice, which are done by sliding along the touch screen. Many unorthodox concepts for otherwise-standard RPGs are implemented, such as fights in which ranged or melee attacks suffer a penalty. Magic points are handled in an unusual way also, gradually diminishing while the player explores and reappearing through actions in combat. Anything without a set number to determine its effect is decided by a roll of the virtual dice, which loses its luster fairly fast. Regular battles also tend to take a significant amount of time to complete, though at least the game is short enough that almost every fight brings something different to the table. 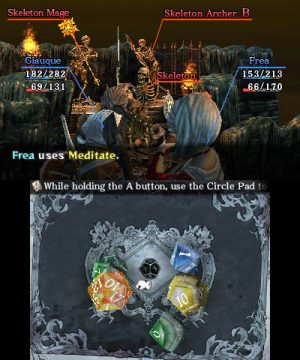 Blowing onto the screen for luck may not be terribly effective.

Crimson Shroud does not use experience, letting character statistics be decided entirely by their equipment. There is also no class alteration, though the spells and abilities the trio of characters have access to is extensive. Those abilities are entirely granted through what is currently equipped, and equipment in turn is partly determined through luck due to the somewhat randomized nature of what is found while exploring. Enemies drop plentiful items after every encounter, but a method of melding materials gives the player some say in the process. If the same piece of equipment has been acquired the two can be melded into one stronger variant, and spellbooks dropped as spoils can be fused into weapons and armor to allow spell usage. The game is brief, but the multitude of options available for equipment and magic would be impressive for a much longer title. A New Game + ability lets the party keep all its spoils when running through the game again while increasing enemy strength to compensate.

The bothersome part of Crimson Shroud‘s inventory stems from the voluminous information presented on each piece, and how the 3DS screen is unable to display all of it at the same time. Equipment has so many statistics to influence that it is impossible to see what all of them do without constantly scrolling up and down in the menu, and item descriptions automatically scroll at a pace that cannot be altered even through changing the speed at which narrative text unfolds. This means a considerable portion of the player’s time will be spent managing the inventory that could have been shortened noticeably.

Progression occurs by wandering around to every accessible room and seeing what happens. One aggravating instance requires the player to keep fighting the same enemy encounter until a mandatory item is dropped, but the game rarely provides much direction. Its compact size makes this easy to cope with, but not very enjoyable. 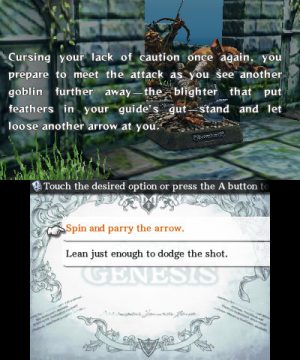 Goblin bashing time! Being a pincushion makes that harder though.

In its visual design Crimson Shroud is obviously influenced by tabletop gaming, depicting immobile board game tokens for every character, complete with plastic bases on which Level-5 is written. The surroundings of the characters also perpetrate the illusion of everything taking place on a gigantic table somewhere, which does not push the 3DS hardware to its limits but is an interesting conceit. Basiscape’s audio provides a rousing backdrop to the events on the screen, and supplies a surprising number of high quality compositions for a title that can be finished in five hours.

Yasumi Matsuno has crafted a title that displays his unique touch, but is tough to recommend to a broad audience. The experience of a tabletop session is tough to recreate in an actual video game, even with as gifted a storyteller as Matsuno for the DM. It’s a unique and breezy endeavor, but one with plenty of aggravation along the way.