Citizens of Earth is a strange animal, the sort of bizarre, nonsensical RPG that only comes along once in a long, long while. It features politicians and protestors, bodybuilders and baristas, and all sorts of weird animal/household object hybrids. Instead of monsters and magic, ordinary citizens do “battle” with the skills of their trade, whether that be baking a cake or psychoanalyzing childhood traumas. It uses an interesting mix of classic and modern game design philosophies, but unfortunately frequently flounders between fantastic and frustrating.

As the Vice President of Earth, in what one can only assume is a precursor to the worldwide government of Futurama, players are given the daunting task of investigating strange goings-on at the local Moonbucks coffee shop. When this same Moonbucks later rips itself off of its foundation and flies off into the sky, Mr. VP must recruit the ordinary Citizens of Earth to help him track it down. The whole story is pretty outlandish and pokes a great deal of fun at incompetent politicians, reveling in the absurd and doing so with a great deal of success. The writing is great, as is the accompanying voicework, and the creativity extends to the descriptions of attacks in battle as well.

Combat itself is an interesting take on classic, turn-based battles that make use of some more modern conventions. Characters have a wide slew of attacks with different effects, and each of these attacks either expend or replenish energy. Each character has between two and five energy slots, and the more powerful attacks in the game tend to cost more energy to perform. Players will need to use replenishing skills between heavy attacks in order to be as effective as possible. On top of that, it also features a simple elemental system, though this isn’t the typical fire, water, earth, wind style seen in most RPGs. Instead, the elements in question are heat, hydro, electric, bio, muscle, and verbal — yes, verbal. Many of the attacks in the game simply involve giving the enemy a good talking-to, which is one of the most hilarious concepts at play in the entire game. When players strike an enemy’s weakness, they gain an extra point of energy, while if they strike an enemy’s resistance, they lose one energy. It’s a simple but important facet that makes things a little more complicated. 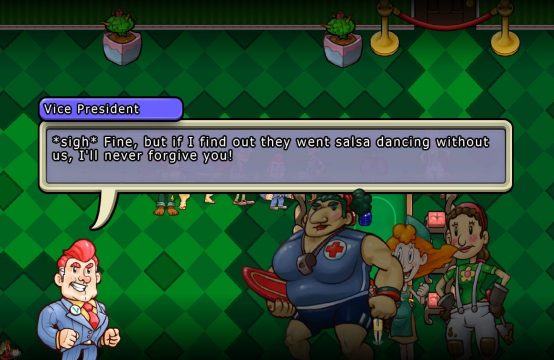 All the best dances are named after chip dips.

Unfortunately, there are a few balance issues that put a damper on the otherwise fine combat. It’s not an issue of the game being too easy or too hard — in fact, there’s a citizen players can recruit that can change the difficulty on the fly. The problem lies more with frequency and length of encounters. There are a number of enemies that use defensive abilities that do nothing more than needlessly prolong battles by multiple rounds. When enemies do finally die, they die one at a time, even if they’re killed with the same move, prolonging the end of the battle by several needless seconds. This might seem like a nitpick, but because of how encounters work, these seconds add up quickly and become a source of much ire.

Enemies appear on the map like many modern RPGs, and touching one begins a battle. Unlike most RPGs, however, each enemy on the map represents a single enemy rather than an enemy group. If multiple enemies are nearby when players enter a battle, they all have to be fought at the same time. While this is a novel approach, it backfires in certain areas, particularly in the later parts of the game, where the number of enemies on the map reaches ridiculous levels. When they swarm like this, avoiding them is next to impossible, and escape is typically not an option since the chance of a successful escape is absurdly low. Enemies reappear if the player leaves the zone, so it’s easy to get frustrated when trying to find the right path to travel.

Not all areas are like this, and when the enemies are more sparse, the game tends to be much more enjoyable. In fact, traveling through the different areas and figuring out how to recruit each of the forty citizens is easily Citizens of Earth‘s best feature. The level design is impeccable, featuring a surprising number of large, interconnected zones. As the game progresses, players will need to find a way to access each of these areas. Most of the time, a certain citizen is required in order to overcome different obstacles, but in almost every case there are two or three different paths one can take to get to their destination. Even if players don’t have the citizen needed for one path, another citizen can probably get them there in another way. There are also a number of different shortcuts players can take to get from place to place later in the game. They can have the pilot fly them to the various helipads throughout the world, or they can have the psychologist help them navigate the dream world, or they can have the programmer upload them into the internet. Even if players don’t wind up using all of their citizens in battle, they all have out-of-battle talents that will prove helpful one way or another. 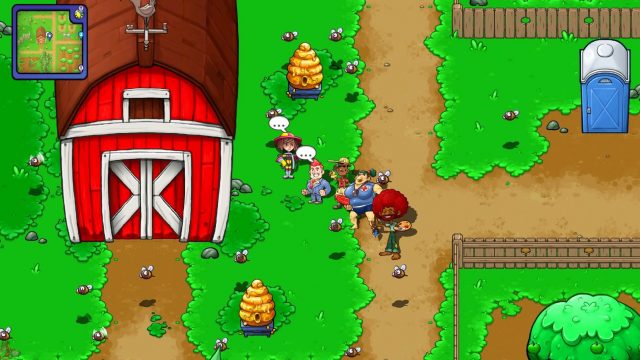 All of this is presented with colorful, highly detailed artwork. The environments are varied and delightfully cartoonish is their design, and the character sprites are terrific and also very multicultural. The music has an amusing, 16-bit quality to it that seems to be deliberately tinny, evoking the classic era of RPGs that clearly inspired many of the game’s mechanics. The voicework is by far the highlight of the game’s audio.

I would be remiss if I didn’t mention that Citizens of Earth is, sadly, a very buggy game, at least on the PC. Over the course of my twenty-plus hour playthrough, I experienced more crashes and game-breaking bugs than I can count. These varied from runtime errors that crashed the game client completely to more innocuous gameplay problems that nonetheless required a restart. I can happily report that the game has been patched multiple times since I first started playing, and most of the more severe bugs became less frequent or disappeared entirely afterwards, but it is unlikely that all the bugs will have been squashed by the time the game launches. Thankfully, the game’s fantastic auto-save feature coupled with the ability to save at any time means that little to no progress will be lost when restarting the client. Even if players get stuck in the environment due to a collision-detection error, saving and restarting will plop the VP back at the entrance to the zone. While players should be wary going in, the bugs shouldn’t have much of an impact on the overall experience.

Citizens of Earth could have been a modern classic, but a few questionable design choices sadly hold it back. With fewer enemies on the screen, and perhaps a way to avoid them, the game could have cut out several unnecessary hours and been a much tigher, more enjoyable experience. As it stands, it’s still worth checking out, if only for the absurdly weird concept and wonderful level design. The VP’s hair is pretty fantastic, too.