Those familiar with Ridley Scott’s sci-fi classic Blade Runner or the Philip K. Dick novel that it draws its inspiration from won’t need much in the way of an introduction to the oppressive dystopian vibe permeating Jump Over the Age’s Citizen Sleeper. Part die-rolling tabletop emulation and part choice-based visual novel, the game asks heavy philosophical questions about the nature of existence and sentience while stacking the odds against players in a brutal battle for survival. It does this via power characterization and thought-provoking prose that shine through the game’s uneven pacing.

Players take on the role of an unnamed Sleeper, a being struggling against the defined role placed upon them by their makers. A Sleeper is what awakens when the memories and consciousness of a human are copied and implanted into an artificial body while their original owner is put into a dreamless sleep. Normally, this means a life of indentured servitude for the newly born Sleeper, working in a corporate-owned colony until such time that its artificial body expires and the original human is reawakened. This time, however, things take a different turn, as this Sleeper stows away aboard a space freighter and escapes into the deepest reaches of Space, hoping to experience true freedom.

After drifting in a coffin-like cargo container for months, the Sleeper finds themselves aboard the space station known as Erlin’s Eye, home to a broad spectrum of the galaxy’s most unfortunate and forgotten souls (as well as a wretched hive of scum and villainy). The game is fairly open-ended, and the Sleeper’s ultimate fate, and how to reach it, is up to each individual player. Whether simply trying to survive the station’s cruel streets of Lowend, becoming a laborer to earn passage on a colony cruiser, joining a local farming commune, or infusing their life savings in a burgeoning business venture, there are plenty of options for how it can all play out. 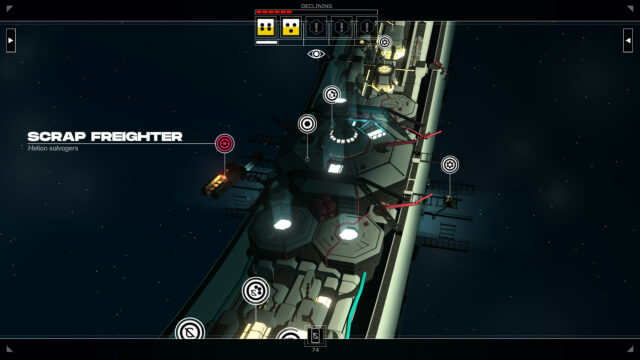 Life aboard the Eye is difficult, and death and survival seem constantly balanced on a razor’s edge. The Sleeper has innate biological drawbacks that persistently threaten their existence. Each day-like cycle that passes on the Eye causes the Sleeper’s Energy levels to decrease, requiring a regular supply of food to prevent them from entering a state of starvation. At the same time, their basic body condition is in perpetual decline, which will result in a state of Breakdown if not repaired or treated — a system purposely installed in their body by the Essen-Arp corporation as a failsafe measure should a Sleeper ever escape its imprisonment.

Food and medicine, however, are scarce, and cost cryo chits, which are extremely limited. The vast majority of actions in the game require spending dice, rolled at the beginning of each cycle, with higher die rolls providing better chances of success. In peak condition, the Sleeper is awarded five dice to spend per cycle, but this number decreases as their condition weakens, leading to them being nigh unable to do anything as dice dwindle down to zero if their condition is left unchecked. 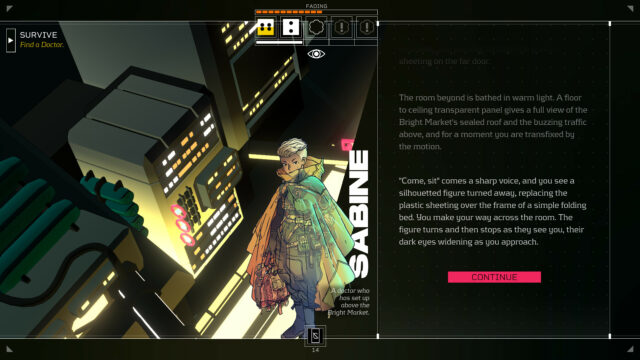 Getting fixed up by the local sawbones is one of the few ways to survive on Erlin’s Eye.

Players who struggle to keep up are actually punished even more severely: a starving Sleeper’s body condition degrades twice as fast. To make matters worse, while some in-game events are available to attempt at any time, several are clocked on timers that tick down the number of cycles left to resolve them or suffer unsavory consequences. Whether it’s a pair of rogue programs called Hunter and Killer that are on the verge of sniffing out the Sleeper to “deal with them” or a bounty hunter hired by Essen-Arp who is en route to the station to reclaim their lost property, there’s always a Sword of Damocles hanging over the Sleeper’s head, making the bulk of the game a rather stressful and oppressive experience.

Eventually, however, an odd thing happens. As players manage to deal with one threat after another, the game becomes easier, to the point that the final chunk has virtually no challenge as threats have been dealt with and resources can finally be stockpiled. However, that’s not necessarily an indictment, as these final hours also include some of the game’s best narrative beats, full of touching and introspective storytelling that’ll haunt players even after the credits have rolled. It’s honestly liberating to have earned the right to experience them free of stress. Those seeking the constant adrenaline rush of increasing danger, however, may not find the finale to their liking. 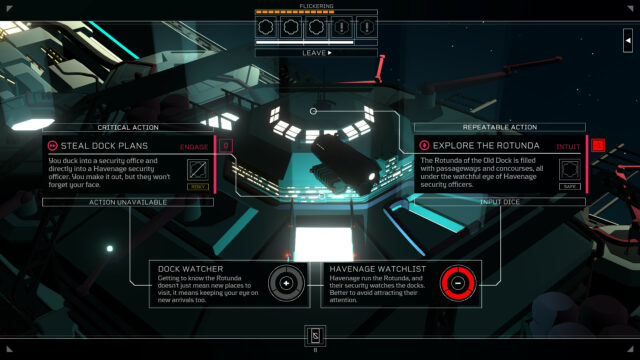 Performing actions requires dice to be assigned to them.

Erlin’s Eye is explored entirely via the station’s map screen: selecting a location will either lead to an action the Sleeper can perform there or a narrative vignette. For the most part, each story in Citizen Sleeper is a standalone episode; this is the Sleeper’s story, so they are the one connective tissue tying them all together. The writing is quite strong, and perfectly fits the sense of loneliness and being lost in space, with descriptive and well-constructed prose throughout, despite quite a few grammatical errors that have persisted during the script’s translation. The other characters the Sleeper meets on their journey are fleshed out quite well. From the mercenary with a heart of gold to the traveling chef with a penchant for stories, from the brusque scrap-metal salvager to the despicable company exec, every role that makes a space station tick is well represented. A particular highlight is the story of Lem and Mina, a down-on-his-luck scrapyard worker trying to make ends meet to support the little orphaned girl he’s adopted, both of whom the Sleeper can forge a deep bond with.

RPG elements are infused into the gameplay in a couple of ways that make a bit of character-building possible. Right out of the gate, players are offered a choice of three character classes, which differ from each other in skill proficiency. Every action on Erlin’s Eye aligns with one of the Sleeper’s five innate skills; a Sleeper with a bonus in the Engineer skill, for instance, will enjoy a +1 added to any die slotted into those actions. To balance this, each class also starts with a -1 weakness in another skill. These bonuses and weaknesses, however, can be built upon or evened out by using upgrade points earned by completing quests known as drives. Each class also has one additional unlockable skill that can grant extra boons, such as earning more resources for completing an action. The options are limited but welcome, and a persistent player with an eye towards completing as much of the game’s content as possible can go a long way towards maxing most paths out by the end. 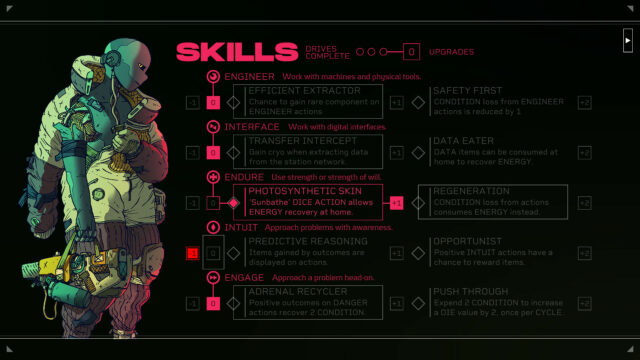 There are a number of short-but-sweet skill trees to help the Sleeper along their path.

Being so heavily text-based, the game’s visual presentation offers just enough to let the player’s imagination build the world presented in the prose. The ring-shaped Erlin’s Eye exists solely as a zoomed-in map screen, with points of interest dotted along its arc. There aren’t any on-screen characters to directly control, but players can swivel the view and rotate along the Eye’s rim to see further sections. Little animated touches like moving spacecraft and hovercars do exist to lend some life to the image. Character portraits are large and detailed, despite having no animation at all. Music ranges from being minimalist (or even absent at times for effect) to providing good atmosphere for more emotional or suspenseful moments. The compositions all have a fittingly futuristic feel, like a space-age soundtrack performed on digital synthesizers.

Overall, Citizen Sleeper is the kind of game one has to be in the right mood for. The setting is cold and alienating, while the overall mood for much of the game is a desperate struggle for survival against stacked odds. Once the stress of this abates, however, there are some genuinely lovely moments of characterization and storytelling that are absolutely worth it to experience. The challenging dice-based tabletop gaming experience is stressful at first, but loses some of its challenge as situations are dealt with, giving way to lovely and thought-provoking story interludes. With the developer supporting the game further with several pieces of free DLC, there’s a good amount of worthwhile sci-fi to experience here.