Celestian Tales: Old North is a Kickstarter-funded RPG from Indonesian studio Ekuator Games that seeks to combine some of the greyer moral aspects of western fantasy with traditional turn-based JRPG gameplay. With a tale spanning multiple decades set to be woven across three games, this title is the first of that trilogy, introducing players to the Old North and its six main protagonists. Unfortunately, right now the game simply feels like a prologue to that larger tale and doesn’t quite offer a substantial enough experience in line with its promises.

Set in a medieval fantasy world, the game follows six young nobles training to become knights in the Old North, an isolated and very traditional feudal nation. At the start of the game, players select which one of the six to have as the main viewpoint character for the playthrough. This selection offers a brief prologue showing that character’s background and every now and then also gives the character a scene to themselves without the rest of the party. While appreciably designed to add replay value, there’s just not enough difference between the playthroughs to make it worthwhile, even with a single playthrough easily completed within ten hours.

The story has a deliberate focus on grey moral areas and while the game does a good job of noting and arguing through some tough decisions, it doesn’t deliver on giving players much choice in how to handle them. The number of choices can be counted one hand, and though there is no obvious right or wrong, right now there appears to be little to no impact on the events of this particular section of the tale. The game in general is very linear, with minimal side content but also little unnecessary filler. It remains to be seen how these choices will affect the subsequent parts of the trilogy, but it’s disappointing that there isn’t anything more immediate. It’s also painfully obvious at times that this is far from a complete tale. Although the main foe of this game is dealt with, virtually every other arc is left unresolved at this stage, with the game ending with a rather odd sudden twist. It is worth repeating at this stage that this is part one of a trilogy, something that could be much better communicated in the game. 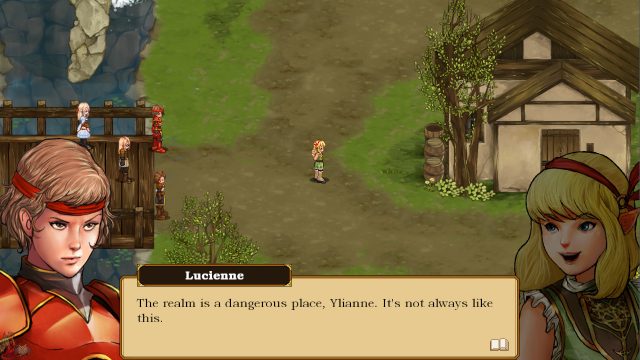 Of course, in the game it’s always like this. Otherwise it would be boring.

Battles follow the basic turn-based formula, with three of the six party members involved. There is no MP-style bar in Celestian Tales: Old North, with magic not being used in the country, replaced instead by a number for stamina. Stamina is used for more powerful skills by both the party and its opponent and goes up by one with each regular attack or by two if the character defends. It’s a relatively straightforward and solid battle system, but there’s nothing really new here.

The entire party has a shared experience bar, meaning players don’t have to worry about those on the sidelines falling behind, with a linear levelling system granting three characters a new skill each level up to level twenty. Some customisation, but not much, is available in selecting the four skills and two passive abilities each character will have active in battle. There is also a rudimentary equipment and upgrading system, with dropped items used for enhancing weapons or sold in order to buy better armour, the latter of which is vital in the final stages. Exploration is mostly decent, though there is a hefty amount of backtracking. Monsters roam the various areas, leading to battle if touched, but they are very easy to avoid if players don’t fancy it.

One area the gameplay could do with improvement is in the difficulty balancing. For a large chunk of the game things are relatively straightforward, however, after a certain point the game suffers from a couple of big spikes, particularly in the final two battles. There is also the sin of giving the final boss a powerful and repeatable healing move. This is counteracted by allowing bosses to suffer from status effects, but those who have not prepared their party for it ahead of time will find victory near impossible. 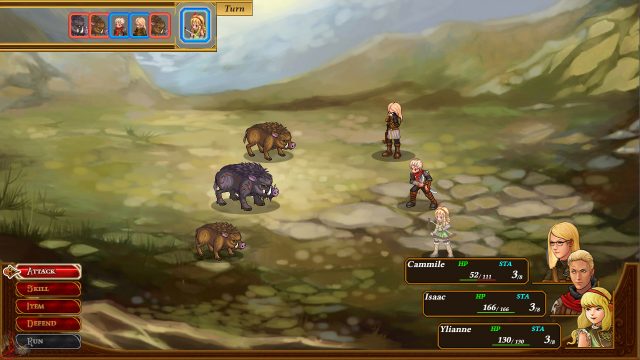 Alas, the previous comment means I can’t make a “what a boar” joke here.

Visually, the game is pleasing. The sprites are decently animated and it’s easy to recognise the various characters, with all the locations having a very appealing painted style. The character portraits also work nicely, with a good selection of reactions helping to sell the dialogue. Battles aren’t especially flashy, but outside of that there’s nothing to complain about, with crisp and fairly quick animations meaning things don’t ever become bogged down. There is a small number of graphical glitches dotted around, but these are minor and easily overlooked. The game’s relatively small selection of music is also pretty decent, providing an enjoyable background to proceedings without sounding repetitive.

At present, Celestian Tales: Old North is a bit of an odd bag, feeling more like a prologue to something bigger than a full title standing on its own. There is certainly enough potential here for the second part to be worth a look to see if it can take the game further, but the game as it stands just lacks delivery on its promises. There will be some that get plenty of enjoyment out of the title, but others will be best served waiting for the tale to be more complete.