When Keeping It Real Goes Wrong

The main character and his best friend sit around talking, mostly with the friend being ignored. When her dog suddenly takes off, she gives chase, only to come down with a case of being passed out. After getting her to the hospital, all hope looks lost for her waking back up. An ominous voice speaks from seemingly out of nowhere, telling the player that they have but one choice. Follow a frog through a giant door appearing on the roof of the hospital to save his friend or let his friend slowly die. Not wanting to start the game off with the friend dying, the main character sets forth on a journey into the world of Brave Story: New Traveler.

Starting the game off, players will notice that the feel of the game isn’t much different than most other turn-based roleplaying experiences. There are many unique ideas the game eventually shows off to players, but they’re eased into them, rather than immediately being exposed. For example, players will notice words come up on screen explaining different types of weaknesses that enemies have against certain weapons and attacks. From Critical, which grants stronger physical attacks, to Tribal, which shows enemy type weaknesses, players will have more reason to pay attention to the screen.

As players travel across the world, they will pick up new characters, both permanent and as guests. Also, while talking to certain people generally just starts conversations, occasionally they might net players some sidequests. These quests might be something as simple as fetching an item from an upcoming dungeon or as tough as visiting a past dungeon to defeat a tougher boss monster. Adding even more depth to the game is the item creation system, which requires players to find diagrams and then locate the correct items required to create those items. Some sidequests require players to create items and show them to other characters to complete. 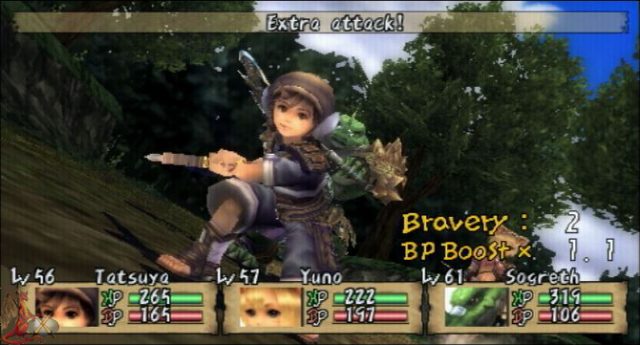 The game uses three main systems to determine how the game plays — Friendship, Courage, and Growth. Friendship is all about the Unity system, which includes both offensive and defensive skills. Sometimes, characters will block for other characters when enemies attack, if their friendship is high enough. Bravura Skills and Brave Points are part of courage, adding a strategic element to the game’s use of skills. Growth is multifaceted in that players are searching the world for gemstones that, when found, will transform the main character’s sword into a more powerful form. The last part of growth has to do with Bravesouls, which are learned by characters when they reach a certain moment in their development, strengthening both them and the party.

As mentioned before, the game utilizes a turn-based battle system, a system familiar to many other fans of RPG titles. Players will notice that they get the usual choices such as attack and item, but the game has plenty more to offer when it comes to deciding what to do in battles. Magic in Brave Story utilizes what are known as Brave Points, similar to MP, to use these attacks. On top of this, there are Unity Attacks that are used by two or three characters to either attack enemies or strengthen the party. These also use Brave Points, and trying to use these without the required number of points will cause the Unity Attack or skill to fail and will just cause those players to use regular attacks in their place.

Players will find that a group of mercenaries takes care of each town and inevitably, the entire world of Vision. This group of people is known as Highlanders, and they may disappoint some in that they are not immortal and there is not only one. Eventually, the main character and his group join the Highlanders and they are thrust out into the world. Each town has a branch, and players can go here to receive a bounty for the number of enemies that they defeat, each enemy being worth an amount depending on how powerful they are. 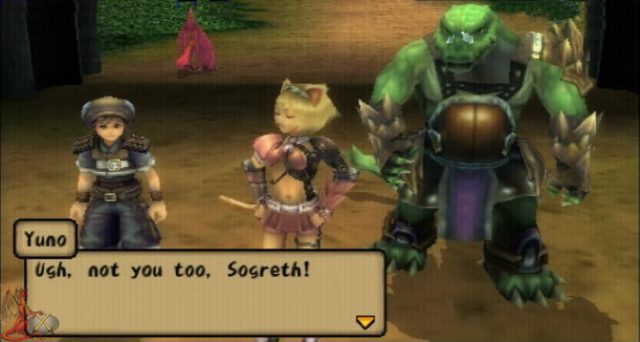 During their travels, players will meet a group of bird lovers, known as S.N.O.B. — Social Network of Bird-Lovers. This organization is all about the capturing of birds known as Goalfinches, used in the art of Birdbrawling. Goalfinches are birds that come in all shapes and sizes with all kinds of skills at their disposal. Players can find Goalfinch groves located all over the world of Vision where they can collect their own army of multi-colored birds to battle against other members of S.N.O.B. that they meet along with way.

Catching birds in a grove is similar to random battles in that players run around in the Goalfinch groves and go to another screen where players need to try and catch birds. Each different color bird adds to different stats, with rare birds such as white, which add to all stats, and black, which take away from all stats. After either time runs out or the player catches all of the birds, the birds are all combined and transform into a single bird, sometimes mutating into one of the two rare colors. These birds can then either be used to battle other birdbrawlers or can be traded in to S.N.O.B. members that are located in towns.

Traveling the vast world of Vision may seem like a daunting task at first, but players will soon find various means of travel, including wagons pulled by giant beasts known as Darbabas. Very late in the game, players will find a very quick way to travel and will use it quite often. This final way of travel will also allow players to travel to areas normally not accessible by other means. This is how they will find the game’s bonus dungeon, which will give players quite a bit more game to play after completing it. After the credits finish, players should be sure to save, as they can then return to the world of Vision to complete all of their unfinished sidequests as well as try and complete the bonus dungeon.

Players will notice that the game is one of the prettiest titles available for the PSP and that the art style of the game fits the fantasy story well. Once players enter the world of Vision, they will meet a cat race called Kitkins, a lizard race known as Waterkins, and multiple others including an ancient race of demons cleverly known as Demonkin. All of Brave Story‘s cutscenes are rendered with the in-game engine, which is still a delight to see, so players won’t have to worry about the quality.

In Japan, the game had no voice acting at all, so with the addition of voice acting in the few cutscenes that have them are quite the bonus. The cast is quite fitting and while there are a few that could start to be grating, the voices being infrequent really quashes this problem. Also in the audio department, players will notice that one of the high notes in the game is that the music is quite enthralling. The music always seemed to fit the moment, giving players something to travel by and moving players to tears in others.

So, even though players can defeat the game faster than they could most roleplaying games, they would not get the full experience of finding out all of the secrets that the game holds. The game continues on even after players defeat the final boss, but it’s up to them if they want to see what else is out there. Though the game doesn’t try to differentiate itself from most titles, the game’s music and story will keep players interested the entire way through. To sum things up, players who are fans of turn-based RPGs will thoroughly enjoy this title.