Time Is on My Side

The PlayStation 2 era was a time of experimentation with Gust’s flagship series, and nowhere is this more evident than in the second title for that platform, Atelier Judie: The Alchemist of Gramnad. Time is, in fact, the central theme of the game.

It all started when Judith Volltone — Judie to her friends — was hired to produce an artifact called the Dragon’s Hourglass. This little bauble holds the amazing ability to temporarily shift the flow of time backwards or forwards. Unfortunately for her, she flubbed a critical part of the process, and once the smoke clears it’s obvious that things have gone very wrong indeed. Her shop is in ruins, and the little village she calls home is nowhere to be seen. A passing stranger isn’t much help with her confusion until he happens to mention that the year is 885, which is about two hundred more than it should be, as far as Judie is concerned.

For an intrepid young alchemist, a bit of temporal dislocation is but a strange obstacle to overcome. With the help of that passing stranger, a moneylender named Witoss, Judie is able to outfit herself with a room at the local inn, the basic implements of her craft, and a hefty debt to pay off. Getting Judie out of the red is the first real goal of the game, well before it’s possible to even begin recreating the Dragon’s Hourglass (for which at least one of the ingredients is currently extinct).

Once she’s financially sound, Judie has a few choices available. There are five towns in Gramnad, and it’s relatively simple to pack up her things and move to a new location. Everything not in her basket gets sold, and all extant job requests are voided, but otherwise there are no hassles. Likewise, there are ten different playable characters in Gramnad, each with their own strengths, stories, and quirks. Only two of them have scenes that are actually vital to the progress of the game, however, and none of them really interact with each other. The animated sequences at the end actually show more interpersonal relationships between party characters than can be seen for the bulk of the game. 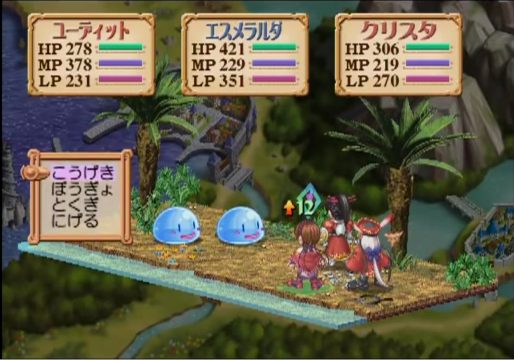 Do they squeak when you thump them?

This is Atelier Judie‘s biggest weakness. While Gust’s writers were getting better at fleshing out characters and providing more than the bare bones of a plot concept, they still had not by this point (circa 2002) gotten the hang of having all the different plot elements work together in a cohesive manner. The game suffers from long periods between events, on top of making it hard to tell what might be important and what might be fluff, so for much of the game the only driving factor is the desire to fully explore the game’s five adventure zones.

These zones are the first of many changes which Atelier Judie brought to the series format. For the first time in any Atelier game, there are actual areas to explore, with blocked sections that require various items to traverse. The most important items for exploration tend to be explosives (for clearing out rocks) and magic brooms (for crossing creeks and chasms, or for quick exits). Monster strength can vary wildly between sections of the same adventure zone, with most of them having definite “easy” and “difficult” sections. The last zone of the main game, Faktoa Temple, is the closest to being a true dungeon, with many descending floors possessing different enemy mobs. Considering the fact that none of the games before it did anything like this (nor did a few of the games after), it’s reasonably well done.

The items which fill these zones are a different matter. Atelier Judie was also the first game of the series to really switch up elements of the item synthesis system, and the biggest change was in item traits. Every item Judie picks up will have traits that might differentiate it from an otherwise identical item. It may have factors that influence synthesis speed or success, base traits for elements or status effects, as well as a wide array of negative attributes that can affect the overall quality or power of a created item. The same item will have different traits and quality levels in different zones, and it is difficult at times to create a perfect, or even mediocre, item with all the desired traits and none of the negatives. Sometimes, the player will have to be resigned to the fact that not all explosives are created equal, and that their new high-powered healing stew stinks like a dead skunk. A decent grasp of Japanese is a must for figuring out just what one is doing with this. 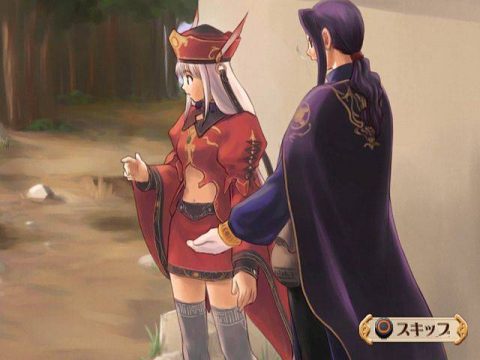 Huh? The village was over there, wasn’t it?

Item quality and durability are also major issues. Most items in this game have a deterioration factor programmed into them, which can be hastened along by certain weather conditions on the road. Once the item’s quality reaches zero, it turns into a worthless lump of slag that takes up inventory space until it gets thrown out. Well before that point, there may be problems. That high-powered healing stew can go bad within a few days, still usable but so disgusting that it causes gastric distress to the point of knocking out the person eating it. One of the best healing items may actually melt before the player has a chance to use it. Most annoying is the case of the Blue Moon Crystal, which deteriorates so fast that the player will need a solid exit strategy to get it out of the adventure zone and into the workshop before it crumbles to bits. On the plus side, fermented items will only improve with age, while magical artifacts can be used indefinitely as long as Judie gives them a while to charge up. This game was also the first to allow the player to set created items in local stores, to be bought at leisure later on, so it’s possible to stock up on perishables easily.

One of the defining characteristics of an Atelier game is its calendar, but again this game takes things in a weird direction. There are no months or years measured in Atelier Judie, only days or fractions thereof. This also means that there is no ending date for gameplay; the game continues on until she makes the Dragon’s Hourglass and finally decides whether or not she returns to her own time. The lack of deadline does not help the aforementioned issues with slow plot progression.

Battles remain simple affairs, but some changes to basic character stats have opened new avenues for combat strategy. In most games of the series, a K.O. happens when hit points reach zero, but for this one, a character or monster can be knocked out by reducing magic points or life points, either directly or by pushing too hard with spells or physical feats. Many spells and attacks can target MP and LP directly, allowing a way around the mountains of HP possessed by some of the stronger monsters. Sometimes, an enemy might lack one or two of these point types completely, such as ghosts (which only have MP) or constructs (which have only HP). There’s even one party member — fan-favorite Pamela Ibis, in her gaming debut — who happens to be a ghost, dealing out MP damage while being completely immune to physical attacks and effects. 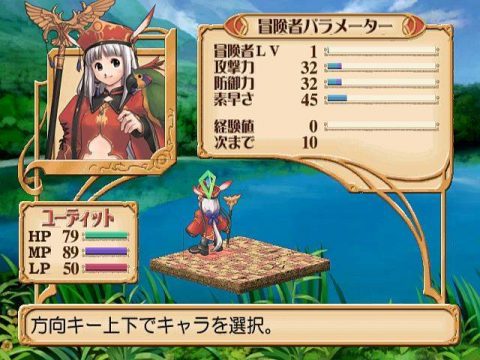 More alchemists should get parrots.

Atelier Judie marks the beginning of Jun Futaba’s run as the character designer for the series, and his personal style blends well with the series aesthetic. It has the colorful blend of fantastical and pseudo-Germanic RenPunk that exemplifies the Atelier games, providing visually distinct locales and properly cartoonish enemy sprites. Of especial interest for fans of the old games is his presentation of Hermina, in a critical stage between the child prodigy of Atelier Lilie and the frightfully creepy instructor of Atelier Elie.

As is normal for the earlier Atelier series, Atelier Judie is fully voiced for all major characters, with beautifully animated sequences for the beginning and endings. The soundtrack is a collaborative effort by Miyoko Kobayashi (who did most of the PS2 generation), Akira Tsuchiya, and Masayuki Kobayashi (who is mainly credited on the opening and closing themes). Much like the graphics, the soundtrack is best rated by how well it blends with the series as a whole. There are no truly exciting and aggressively powerful tracks, but this is not a series that deals with those sorts of emotion. It’s a low-key soundtrack, and one that would work perfectly well with any other game of the series. Since almost all console Atelier games after this one allow for older soundtracks, this is a very good attribute to have.

Following the concatenation of errors that was Atelier Lilie, this game represents a net gain in the quality of the series, even as it introduces some elements which were wisely never repeated in later games. Atelier Judie is a charming enough game, but it has some deep and obvious flaws which even its PSP remake probably could not erase completely — but that’s a review for another day. For the original version, it’s enough to say that it tries to tell a good story and provides plenty of little things to do. It’s not one hundred percent successful, or even seventy-five percent, but for a fan of the series, it was just good enough.