Making the transition between console generations is rarely an easy thing for a games company, and such was the case for Gust at the start of the century. Atelier Lilie: The Alchemist of Salburg 3 proved that amply. While it did a lot to move the series forward, it also has a reputation for being unnecessarily difficult to work with, and is hard to recommend to anyone but hardcore fans of the series. For those who do make the effort, it can be an especially sweet nut to crack, but the problem would be in the word “effort.” This is a game that makes the player really strive in order to see everything it has to offer.

Like almost every game in its series, Lilie has both a calendar and a time limit to follow. It is also the last of the console Atelier games to have a set five-year plan instead of three years with the occasional extension. Hard time limits require a delicate balancing act on the part of developers in order to ensure that the interesting or important bits are theoretically all available on a single playthrough. Marie and Elie got by with only a few critical scenes and a lot of character conversations, while later games of the Arland or Dusk subseries manage to include an amazing amount of material. Lilie falls somewhere between the series’ future and past, at that crucial moment when the scenario writers and developers still weren’t quite sure how to handle it all. There is a wealth of storytelling hidden in this game, but much of it is ruled by difficult-to-activate plot flags, or by other arbitrary requirements that are hard to understand or to meet, even with the help of an FAQ. Ignorance of minor but critical details early in the game may lead to hours of befuddlement and catching-up later, and the game just does not give enough leeway for that to work, timewise. On the plus side, this pretty much ensures that a second playthrough will be different from the first. On the minus side, the player will probably be too frustrated to give it a second go.

Possibly the best example of Lilie‘s nature would be the case of how to make chocolate. In order to create the sweet brown confection, a long list of conditions need to be met. By the time the joys of theobromine are revealed to the citizens of Salburg, the heroine will have discovered ancient ruins, used lost knowledge to create miraculous alloys, faced down a pit fiend as it attempts to claw its way out of Hell, and finally constructed a device to turn back the clock and render the native cacao analog un-extinct — all so she can make a novel dessert to present to the king. That’s enough effort to qualify it as a main quest line in many Atelier games, and in fact the Philosopher’s Stone (a key item for the Good ending) is several orders of magnitude easier to make. If the player doesn’t trigger the right scene soon enough, or doesn’t buy a particular item from a vendor in a timely manner, then the entire thing may end up impossible with no indication as to why. 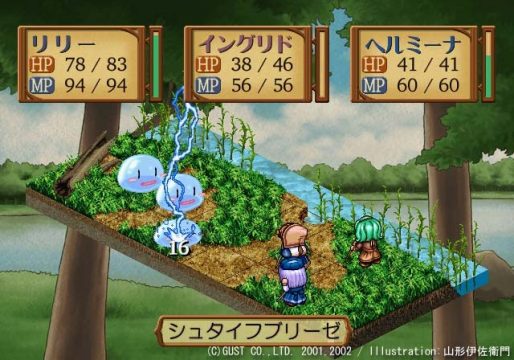 A day out with the apprentices.

What’s all this effort for? The construction of a new Academy, that’s what. Like all Atelier games, Lilie has a goal, and that’s to build a new center of alchemic learning in the city of Salburg. Lilie is a prequel to Marie and Elie, taking place in a time when Salburg was a quiet kingdom with no knowledge of the wonders of mystic science. Master Dornier has recently arrived from the city of Kentniss with his two young apprentices and Lilie as his journeywoman assistant, and he intends to spread the knowledge of his craft to a new continent. Much of what is interesting about this game’s story hinges on the fact that it is historical to the first two games of the series. Many of the townsfolk Lilie meets are downright suspicious of the foreigners from Kentniss and their strange workshop, and part of the regular flow of the game involves selling rare items to nobles in order to earn political favor. At the end of every year, Lilie must present an item to the king as proof of what alchemy can do for Salburg. In the workshop, Ingrid and Hermina (the feuding professors from the first two Salburg titles) work as young apprentices and sow the seeds of their longstanding rivalry.

The alchemy systems follow the same basic plan as in the previous Salburg games, and especially Atelier Elie. Any item made at least once with the basic recipe can be altered through blending, a process wherein the player tweaks the amounts of each ingredient in the hopes of producing a better item. Higher quality leads to higher rewards from job requests, but the blending process can be a real time-waster without FAQs to help out. The other alchemy trick from Elie, original ingredient combinations, has been altered for Lilie. The Rough Alchemy system lets the player take a known recipe and switch out one ingredient for another of the same general class. It’s far less flexible than Elie‘s system, possibly in order to keep players from bypassing the need for finding recipe books, and only a few variations get significant results at all. On top of all this, there are hardly any clues as to what can and cannot be done with either of these subsystems, and the game’s time restrictions make general experimentation an onerous proposition for any but the most dedicated of spreadsheet enthusiasts. 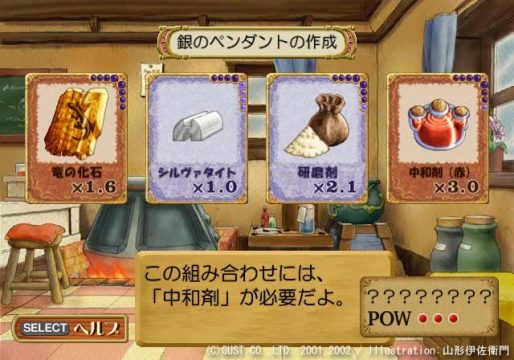 What this recipe needs is more POW.

The selection of jobs is much better balanced in this installment, at least, with the cycle of requests increasing steadily in both difficulty and remuneration as the game progresses. Besides the usual requests for specific items or categories of items, Lilie can also take long-term contracts, providing a set amount of an item every month for six to eight months, with major payoffs at completion. Those really help to fill the coffers and fund the construction effort.

Like most Gust titles of the PSX and PS2 generations, Lilie prefers sprites and animation over any form of CG. Here and there, nice animated sequences take center stage, and the game is graced with many random splash pages. True to series format, the scenes are more often focused on the home life of Lilie and her two young charges, and can be quite heartwarming. It’s a nice change from the usual RPG tropes, and it’s a shame many scenes are so hard to trigger. While the graphics aren’t too far above what the series was doing in earlier games, it’s a harbinger of things to come.

Musically, Lilie adapts most of its soundtrack from its two predecessors, dropping the classical music tracks in favor of those games’ original compositions and generally improving the quality of the background accompaniment overall. Lilie also features full voice acting for everyone, from major companion characters to the random kids and puppies who run around the streets of Salburg. The move to the PS2 definitely helped alleviate the developers’ disc space issues from Atelier Elie. 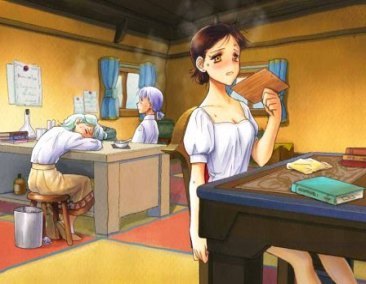 Time to synthesize an air-conditioner…

Combat is another area that is largely unchanged from the preceding games, and for what it’s worth the battles don’t detract from the experience. It’s still the barest of turn-based systems, with only alchemic items and the occasional charged attacks to break up the monotonous whack-whack-whack of sword on monster skull. As the regular assembly line issues apply, most of the strong attack items need to be kept in reserve for the boss encounters, because even with five fairy helpers scrounging for goods and an apprentice to share the workload, it’s hard to keep up with the demand for materiel. All but one of the explosives are mercifully straightforward to make (at least when compared to some items…), but that doesn’t mean they can be mass-produced to any useful degree.

Out of all the earlier games in Gust’s library, Lilie is the one that really deserves a full remake and rebalancing. It’s got a lot more to offer than its predecessors, and it’s not completely broken, either. For slightly better and mostly worse, it’s a game that tried so hard to fly, only to be weighed down by ideas that it didn’t know how to deal with properly. While I cannot say that I’ve completed every Atelier game to my satisfaction, especially not on the first try, even on this (my fourth) playthrough of Lilie I have the strongest feeling of disappointment. That above all else is the reason I had to score it as low as I have.