Atelier Escha & Logy Plus: Alchemists of the Dusk Sky Review

Back in 2014, I stated that Atelier Escha & Logy was a game that had me jumping for joy. It was everything I wanted in an Atelier game at the time, and it showed a lot of growth that the series had desperately needed. Once again, for your reading pleasure, I’m reviewing Atelier Escha & Logy: Alchemists of the Dusk Sky Plus, a port of one of my favourite games to the PlayStation Vita that year. Considering how little the “Plus” versions of Atelier games have wowed me, you’d think playing a favourite game in this form would make it a winner, right?

Atelier Escha & Logy begins with our aforementioned hero and heroine becoming members of the Research and Development team in the town of Colesit. As civil servants, they are tasked with revitalizing the area around Colesit by using alchemy as a means to help others in need. Logy is an alchemist from Central City who has been sent to the Dusklands as part of his assignment, and he is paired with a plucky young apple picker named Escha. Depending on which character the player selects at the beginning of the game, more personal aspects of the story are changed.

The story of Escha and Logy is one of perseverance and compassion. Many of the characters that our heroes encounter are in dire need of help, be it personal or in the grand scheme of things. Both heroes make for great protagonists and, regardless of who’s selected, there’s excellent storytelling all around. Couple this with a great ensemble cast of characters and a fun localization and it’s sure to delight players. The localization is a tad imperfect, as there are a few inconsistencies and typos that have snuck through, but it doesn’t ruin the experience entirely. In this Plus version, more story events were added, particularly for the character Nio, who is now a playable character. There’s enough fun dialog and banter amongst the characters that encountering a new story event is always a blast.

One odd story-related aspect in Escha & Logy Plus is the addition of an emotion system between the protagonists. When Escha and Logy are in conversation, players will be prompted with two different responses, one with a smiley face and one with a heart. This new addition serves no real purpose, save some new lines of dialogue. If this system had actually made decision-making interesting, or shown any real change in the overarching story, then it’d be interesting, but as it stands it’s barebones and useless. 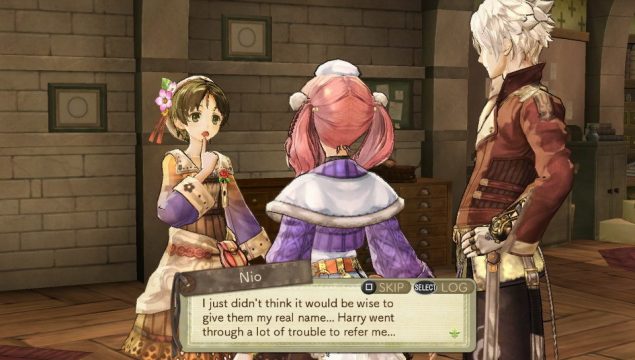 Harry would be a terrible resume reference.

Exploration is also still a joy in Escha & Logy Plus, as this version adds new areas to delve into and enemies to defeat. Boss fights still offer a decent challenge, though a certain boss fight can provide a somewhat uneven difficulty challenge. While the majority of Escha & Logy Plus is easy, there are a few battles that can pose a real challenge if the player goes in unprepared.

The combat system in Escha & Logy is easily one of the best in the series, offering a much more complex take on turn-based battles. With a full party of six, players have a front and back row to manipulate during combat sequences. If an enemy attacks, any one of the five other characters can attempt to guard, which depending on the synchronization gauge, can allow for possible counter attacks. If a character attacks, there is a chance that his allies will be able to join in, which sometimes results in all six party members getting an opportunity to whack the opponent. This creates a very quick and calculated system, because there are situations where it’s best to hang back and hoard your synchronization points. If five characters have previously attacked, sometimes the last character in the group can perform a powerful skill that will double the damage dealt in that turn.

Special attacks also make a valiant return and continue to be as powerful as ever. If characters receive or take damage, their left-hand gauge goes up. Once it is at its maximum, a special can be performed. Furthermore, Escha and Logy can also unleash a skill called Double Draw, which allows for one alchemist to begin an attack with a selected item and then, for as long as there are synchronization points, other characters can attack until the only skill left to use is the other alchemist’s chosen item for Double Draw. That second item attack receives an enormous power-up and, if this coincides with a combo special boost, then the result is massive damage to the enemy. These elements within the combat system keep the game fresh and strategic, without battles becoming a repetitive chore. 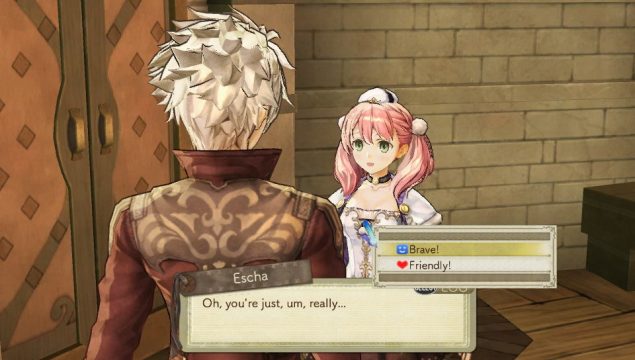 There are some issues present in the Plus edition. One issue that occurs during some boss battles involves the framerate. In a few of the battles, the framerate would drop and it becomes quite noticeable the larger the enemy is. While the combat is fast, in boss battles it does feel as though the animation hits points where it slows down. Another problem comes in the form of how images are rendered in the game’s encyclopedia and notes system. Sometimes the pages stretch beyond the screen, cutting the image off. While this issue is not as frequent, when it does occur it’s difficult to read the text.

What isn’t difficult is item synthesis. Much like its vanilla version, Escha & Logy Plus has a simplistic crafting system that is both interesting and intuitive. Escha and Logy have their own specific functions for synthesis as well: Escha uses her traditional tools to craft items, while Logy has a forge for imbuing weapons and armor with alchemical properties. Partway through the game, he also receives a strange device which allows him to disassemble items recovered from ruins, learning their properties as well as which materials are required to craft them. It’s so much easier to create well-defined items with specific traits, making crafting feel a lot less tedious.

Another “plus” comes in the form of the game’s soundtrack. Players now have complete access to the soundtrack right off the bat and can alter the music that they hear throughout the playthrough. This is a unique feature and one that is great to take advantage of, given how versatile and distinct the soundtrack is overall. Escha & Logy‘s soundtrack is full of life and vibrancy, and having the additional tracks is lovely. In terms of graphics, the game does fall into the same trappings as the previous Plus titles, suffering from framerate and slowdown, which one would think after so many of these “plus” versions, that Gust would fix.

While I loved Escha & Logy the first time I played it, this time around I did see more blemishes than perhaps I wanted to admit. While it’s fun to have a Dressing Room feature where I can make everyone look like pirates, I am still frustrated at how Gust hasn’t ironed out the wrinkles in these versions. Flaws aside, I still loved replaying this game, imperfections and all.