With Your Arms Outstretched to Me

I’m not sure whether I should be jumping for joy or dancing a jig in order to describe my absolute love for Atelier Escha & Logy: The Alchemists of the Dusky Sky. Many of you are going to tell me I’ve likely played this game a million times before, while others may be curious at the insane behavior of a woman screaming “Danger! Awesomeness ahead.” Let’s face it: the Atelier series is one of the most uniquely niche series out there, but it’s one that has the power to sink its claws into you. Before you know it, a few hours of play becomes a twelve hour session. While this series has shown a lot of growth over the years, it would seem that Gust has finally created an experience that is friendly to both newcomers and veterans alike.

Escha & Logy begins unlike any of the previous PlayStation 3 titles, with our protagonists, Escha and Logy, working as civil servants to help the dying Dusklands. Logy is an alchemist from Central City who has relocated to the remote town in a dying land of Colesit, while Escha is an apple picker’s daughter and the only person in that town who can perform alchemy. With their unique backgrounds, the two are enlisted into the Research & Development Department (R&D for short) and tasked with applying their combined alchemical backgrounds towards the revitalization of the Dusklands. Players quickly learn also about an Unexplored Ruin hidden beyond the clouds, and it potentially is the cause for the area’s drought.

Like all Atelier games, there’s usually a theme that is present throughout, and in this case Escha & Logy is all about following one’s dreams and trying to fulfill them. Escha dreams of making it to the Unexplored Ruins, while Logy desires building a Dreadnaught that is capable of making it there. Every character that the player encounters has a dream or goal they are attempting to achieve, and it’s a wonderfully inspiring message that is present throughout. Regardless of whether the player selects Escha or Logy, the differences in the overall game are negligible, but plot sequences will have some noticeable changes. While the plot has a lot more in common with Atelier Rorona in the way it is tightly structured, it does make the story feel less focused at times. Escha & Logy makes up for it with some delightful character interaction, though. 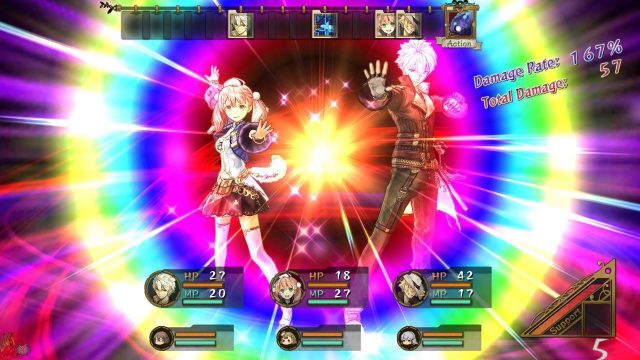 The cast of this game is just as strong as the crew in Atelier Ayesha, and they will make players feel as through they can accomplish anything. Much like Ayesha, there is a substantial focus on one’s coming out of the shell and being completely comfortable. Many of the character interaction also feels more organic as players progress through the story, making it easier to complete ending flags for each of Escha or Logy’s companions. Furthermore much of the character interaction is surprisingly touching and very thoughtful, though comic moments with good placement and timing vary the tone. Escha and Logy are also great foils for one another and their interaction impeccably gives the player the sense that they operate in perfect sync.

Escha & Logy‘s turn-based combat is surprisingly rich compared to all the previous games. There’s strategy involved, and it definitely provides a much more complex combat system to work with, but its surprisingly user-friendly on a whole. It’s fast-paced, but it requires a lot of focus to ensure that players are maximizing the amount of damage they can deal per turn. This battle system in a lot of ways is what makes Escha & Logy stand out from all of its predecessors, as it gives players a reason to enjoy the combat portion of the game, which often felt very secondary in the previous titles.

With a full party of six, players have a front and back row to manipulate during combat sequences. If an enemy attacks, any one of the five other characters can attempt to guard, which depending on the synchronization gauge can allow for possible counter attacks. If a character attacks, there is a chance that his allies will be able to join in, which sometimes results in all six party members getting a chance to whack the enemy. This creates a very fast and strategic system, because there are situations where it’s best to hang back and hoard your synchronization points. If five characters have previously attacked, sometimes the last character in the group can perform a powerful skill that will double the damage dealt in that turn. Special attacks also make a valiant return and continue to be as handy as ever. If characters receive or take damage, their left-hand gauge goes up and once it is at its maximum, a special can be performed. Players can also swap between rows and they will not lose their turn in the process, and guarding will often shuffle the front and back rows to ensure frequent character rotation and those in the back row restore HP/MP when not in use.

There are also benefits to having two alchemists in the same party, mostly in terms of raw firepower, as Escha and Logy can use the Double Draw skill to unleash hell on earth with ease. While it may not be usable every turn, when available it allows for one alchemist to begin an attack with a selected item and then, for as long as there are synchronization points, other characters can attack until the only skill left to use is the other alchemist’s chosen item for Double Draw. That second item attack receives a massive power-up, and if this coincides with a combo special boost, then the results verge on the nuclear in terms of damage to the enemy. 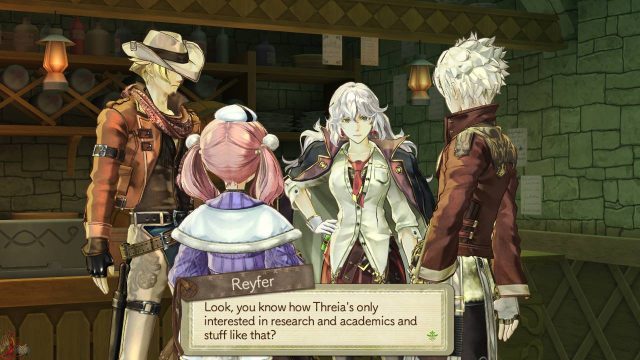 Reyfer speaks the obvious… and wishes Threia would give him the time of day.

Alchemy, however, is much more simplified, but it doesn’t mean players will be doing any less of it. Every quarter Marion, head of the R&D division, will give players a five by five bingo card with tasks that must be completed in order to rank up in the R&D department. The center square holds the task that must be completed to move on to the next assignment. This is where alchemy players a larger role as many of the sub-assignments require item synthesis to complete particular tasks. Some of the sub-assignments are “craft x number of items” or “slay x number of monsters,” and while it feels like players will be doing less synthesis, the amount of it and combat do feel balanced, as one never feels more important than the other.

Escha and Logy perform different tasks within the atelier. Escha uses her traditional tools to craft items, while Logy has a forge for imbuing weapons and armor with alchemical properties. Partway through the game, he also receives a strange device which allows him to disassemble items recovered from ruins, learning their properties as well as which materials are required to craft them. While out gathering, players can also perform changes to the areas which include being able to find rare items easier, change the land so that different items appear, find relics which can then be disassembled, and even fight stronger foes for better experience. As these bonuses appear, be it through gathering or combat, it’s important to take advantage of them. 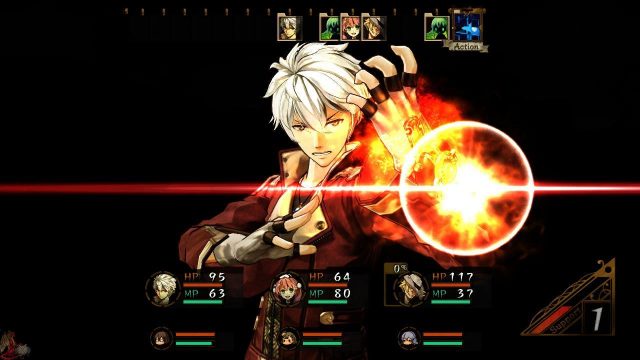 Logy’s amplifier has gone up to 11.

The game has one large pitfall that must be noted. Most of the Atelier games provide a fairly even challenge, while Escha & Logy has one that is awfully unbalanced. The majority of the game is not difficult to complete up until Year 4, where all of a sudden the difficulty spikes, causing players to hit a possible brick wall. This is the first game that really focuses on players going all out with as much firepower as they can during battles, as the last two bosses will provide a horrific challenge if one is not prepared. Negating the difficulty of the bosses often requires being faster than it, but trial and error along with patience and item abuse are necessary to achieve this. The best way to solve this problem is taking advantage of Marion’s “Experiments” that are offered when players turn in reports. Some of these include boosting the level cap, increasing combo gauge bonuses, and the base strength of items that provide critical effects, though this is not a free service.

Patience is also a virtue when encountering the game’s voice acting. There are definitely some instances of hit-or-miss voice work within the English language voice cast, particularly in the character of Reyfer who comes across awkwardly instead of like the cowboy he would love to be. The sound continues to be a joy, though there is definitely some track recycling from Ayesha that is quite noticeable. Visually, Escha & Logy is completely on par with its predecessor, and the game has done an amazing job at providing more unique locations that are visually tantalizing.

I feel like Atelier Escha & Logy is the game I have been waiting a long time for, creating an almost perfect balance of accessibility for newcomers while still challenging the veterans. It will definitely be a polarizing experience for Atelier fans as the game is much more newcomer friendly, though it ultimately boils down to how you like your difficulty. While it’s not the most story-driven game in the series, Gust has managed to create an Atelier experience that is momentous, giving us a combat system that matters, characters with strong goals, and will in the end make us all feel like humanitarians. For those who want to give the series a try, or for those are already invested in this series, Escha & Logy definitely has something for everyone.