What does it mean to make a promise? Promises are made in a wide range of scenarios, but in the case of Atelier Ayesha: The Alchemist of Dusk, they are vows to bring out inner determination and strength. Sometimes a promise means going on a journey of maturity that propels us into seeking truth. In Atelier Ayesha, RPGamers are treated to an expedition of self discovery, filled with the smell of flowers in a dying land.

Our heroine, Ayesha, lives in a remote workshop that was once inhabited by her grandfather and younger sister, Nio. After her grandfather passes away, Nio suddenly disappears without a trace. Ayesha visits her memorial in the Altugle herb garden on the anniversary of that disappearance, only to be greeted with a mute vision of Nio desperate to be found. It is in this moment that Ayesha sees glowing flowers where Nio had appeared and decides that she must journey through the land of dusk to learn the skill of alchemy in order to return her sister to the world of the living.

The narrative in Atelier Ayesha is definitely its highlight. The the story is about a girl leaving her comfort zone of isolation in order to seek truth with the help of others. Ayesha is a strong, likeable protagonist who constantly shows growth throughout the plot, and does so with grace and elegance. She’s also supported by a fantastic ensemble cast that keeps the atmosphere lively in a place of solitude. Much like the previous Atelier titles, Ayesha continues the tradition of having a great sense of humor to go along with a touching journey on behalf of family. A narrative about sisterhood in RPGs in generally unheard of, but here it’s welcomed in the best possible way.

The narrative, however, not without fault. Once the main task of saving Nio is completed, the game continues on with the aftermath of the events, and is less strong because of it. Without the agency to drive the story forward, the final few hours of the game are spent doing side missions for the party members and completing the game’s ending flags, as the game ends at the beginning of the fourth year regardless how much time remains. Players will only have until the beginning of their fourth year to save Nio before time expires. While these plot threads still have some entertainment value, they don’t pack the same punch as the main plot. 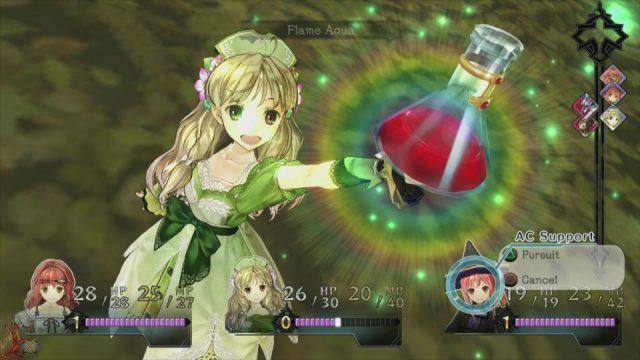 While the narrative has always been strong point in the Atelier series, the combat system has not. However, Gust shows that it is always trying to improve the gameplay with each installment. While Ayesha continues the trend of a turn based battle system, it takes tons of cues from Meruru‘s mechanic of having follow-up attacks. However, Ayesha extends this mechanic beyond what Meruru used, with fairly frequent follow-up attacks that can be done by any character in the party. This is the first time that we see the alchemist taking on more of an aggressive role in combat, as she is able to perform many of the action cues that her comrades can execute. Party members can move around enemies to perform very powerful back attacks while splitting the group apart to reduce the damage dealt. As long as the action gauge is full, party members can lend a hand after the attack of a comrade’s attack to increase the amount of hits dealt.

The only downfall in this system comes from the random turn order, as it’s not always easy to determine whether or not extra hits are negotiable. Enemies can usually get the same advantages, but not to the same dramatic extent as the player. Boss battles in which the opponent gets four actions while the player is lucky to get two can be a royal pain, though the majority of battles in Ayesha are mostly fair. Despite this minor issue, the combat system shows ample amount of improvements to keep battle fast paced.

Outside of the main narrative and combat, Ayesha has tons of secondary content as well. Similar to its predecessors, the game continues its traditions of fun contests, skilled hunts, gathering, and sub-stories. These are all nicely managed in the player’s notebook, which helps to keep track of important tasks along with the time necessary for their completion. The game also has a new bazaar feature, wherein Ayesha can shop for item ingredients through her colleagues. Ayesha introduces players to the Memory System, whereby Ayesha records certain plot events as they occur. For every memory unlocked, she obtains new stat bonuses, or additional items and recipes. Memory Points are unlocked through synthesis, plot events, doing deliveries for the townspeople, or simply through conversation. Memory Points are always constant, so the player will not be constrained from completing each record. These new additions are welcome and create a nice touch to the overall experience. 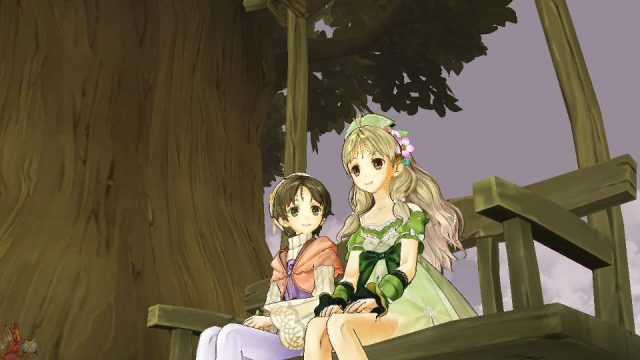 Alchemy continues to be this series’ strength, and Ayesha‘s crafting system keeps the same addictive trends as the previous titles. A black bar simplifies things by telling the overall quality of an item, while four other colour-coded bars show the elemental properties. Higher grade items result in better quality. It is important to carefully look at an item’s property, as it determines what the final product looks like. Since properties are inherited by ingredients, players should note what the properties are because not every one coexists well. Thankfully, the alchemy system hasn’t seen too much change and continues to keep its addictive qualities.

Since Atelier Ayesha is measured in memories, the time limit never feels overwhelming or as restrictive as the previous titles. It’s still very easy to get swept up in the game’s world and find a variety of tasks to complete. Since the game finishes at the end of its third year, the main plot must be completed by that point. However, there are tons of memories to collect and it never feels like a chore to complete. Ayesha on a whole can be completed in less than twenty hours, but with there being so much content, this can easily be stretched.

In terms of visuals, Gust continues its tradition of breathtaking cel-shaded graphics. The game bursts with vibrant hues and every area has a touch of striking individuality. The series continues to demonstrate that brown and gray are vastly overrated colours, putting a wide range of hues into the visual atmosphere. The same can also be said of the game’s soundtrack, which is flawless. The music is haunting, ethereal, and it gives personality and mood to every location within the game. The final boss’s theme in particular captures a fittingly conclusive feel that players can hum along to during the showdown. Although the soundtrack is perfect, the voice acting in Ayesha is overall a disappointment, as many of the characters feel overacted and awkward when they speak. It also doesn’t help that the lip-movements often don’t match up to what the characters are saying, making it incredibly distracting at times.

Atelier Ayesha is a game that can give even a cold person warm and fuzzy sensations. Ayesha’s journey is worth undergoing for those who love to see how this series continues to improve. Ayesha makes you feel as though someone has taken you by the hand and has guided you through the breathtaking land of dusk, with its heartwarming narrative tucked on its sleeve, reminding you that it’s okay to feel connected to the world on an intimate level. Atelier Ayesha reminds us that the human spirit is a strong, beautiful essence that should never, ever be ignored.