Gets in the Eyes

Mistwalker seems to have abandoned the IP of Archaic Sealed Heat, which may be for the best. The game has some nifty notions, but their execution leaves a great deal to be desired, setting up a sameness that permeates the entire product. Perhaps a sequel would have turned this stillborn series into something entertaining, but Archaic Sealed Heat is not a hidden gem that importers should promptly gravitate toward.

ASH uses an unusual mechanic for its tactical battles, employing three-character teams that fight jointly but move separately. Each character charges forty Action Points per turn, up to a maximum of 150 for a team, which are necessary to do just about everything. Movement is a particularly tricky matter, as the Action Point cost increases when characters move farther, quickly sapping the available supply. The three members move around the field separately, but when one initiates an attack, all three participate, no matter how far from the action they are. Movement must be considered carefully before attacking, because fifty Action Points are necessary to start an altercation. The attack’s initiator must be within three spaces of an enemy, but the other two members of the team can be anywhere on the map, and the game has a rather interesting method of coping with this: attack and magic effects vary depending upon range. Inside of a green range they will work normally, up to double the regular range will allow attacks to still be used but at lowered effectiveness and accuracy, and beyond that is a red range in which an action cannot be used at all. It can be aggravating to realize that not enough Action Points remain to get every character into position before attacking, but this system requires some thought and is definitely a highlight of the game.

Fighting through the game’s interface is unfortunately required in order to maneuver the characters, however. A touch screen-only interface for a tactical game was a questionable design in the first place, and Mistwalker’s implementation of it only cements how poor the notion is. Numerous tasks are made far more difficult than they need be, such as the requirement that everything be tapped twice in order to remove the possibility that the player accidentally touched the wrong spot. Tapping the destination for each character is particularly annoying, because the game’s viewpoint is zoomed in a fair amount, to allow using the touch screen for this task. Thus, to move any character more than a few spaces, the screen must be scrolled to make additional parts of the battlefield visible, and then scrolled again if the player is not done moving that character. Moving characters again is necessary because the game will not display or allow the total possible distance any one character can cross, forcing the player to move someone, then move another time, and again until the Action Points are exhausted.

Unrelated to the interface, ASH displays a dismal lack of enemy variety. Most RPGs, tactical or otherwise, will bother to at least apply a palette swap in order to vary the enemy ranks, but ASH wholly recycles the same opponents multiple times. Enemies that were seen in earlier battles will reappear, with improved statistics but no new abilities whatsoever. This dearth of interesting opposition ensures that combat grows dull early on, and the tedium is augmented by the inexplicable decision to force the player to reach an appointed goal to end the stage even if all the enemies are dead. Battlefield variety is also lacking, causing the sameness to encroach on seemingly every aspect of fights. 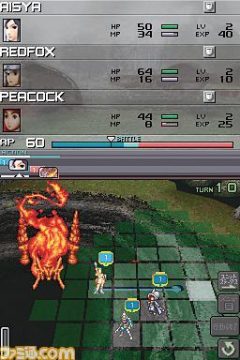 The game randomly assigns names to the generic soldiers, and most of them seem to have escaped from a zoo.

Between battles, ASH is organized in a rather slipshod way. Switching the characters around between teams is easy enough with the touch screen, but the various aspects of the menu are toggled between using tiny icons on the side of the screen that are annoyingly difficult to actually reach, making a supposedly simple task frustrating. Equipping characters is easy, though not as fast as it should be when the store does not allow a newly purchased item to be swapped with what is currently worn; making informed purchases from the store is also trying, because the shopkeeper simply tells who can equip something and its net effect upon statistics, not the difference between this piece of equipment and what is already worn. When many of the characters are generic units who look alike and there are more a dozen people to keep track of, the need to constantly flip back and forth between screens in the menu is a waste.

ASH begins with the ascension of Princess Aisha (or, if we use the in-game spelling, Aisya) to the status of Queen. This is interrupted by the sudden fiery explosion of her castle, and the incineration of all its inhabitants. Aisha seems to have the power to return people from the dead, however, and puts it to good use. She has the ability to summon any number of generic units to help the allies she will soon acquire, and the task of restoring balance to the world falls upon the group. ASH may sound like it covers the standard bases of RPG plots, and it does, but there is enough complexity to what goes on that being fluent in Japanese would be very helpful. The plot moves along some interesting tangents, but the lack of a translation will make it very difficult to comprehend for many importers.

In general, ASH is not particularly difficult, but there are certain aspects that make its challenge capricious. One is the unequal nature of attacking: when the player initiates a battle, both sides keep taking turns until someone loses — but when the computer initiates a battle, all the members of its group get a free hit with no repercussion, and the encounter ends. Character death is also a pain — if a member of a team is killed and not revived in the same encounter, that member is lost for the rest of the battle. If the leader of the team is killed, the entire team is instantly beaten, and if Aisha falls in battle, Game Over is the result. To reduce the difficulty, often the player can repeat an earlier battle several times in order to grind. The other team leaders return after battle with no penalty, and the generic characters can be summoned in infinite numbers, making their defeats a temporary inconvenience. The ability to save at any time also ameliorates the challenge on an absolute scale, leaving only a high annoyance factor. 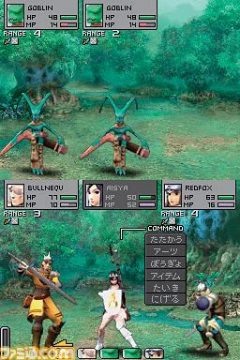 Hitoshi Sakimoto and Masaharu Iwata may have composed the music in ASH, but this is not a score that will be ranked among their top work. It sounds fine and is mostly pleasant to the ear, but fails to be memorable, and a dearth of compositions makes every track play too often. The voice work is almost entirely heard in combat, and is fine without standing out much.

Graphically, ASH manages the laudable feat of making DS 3D look good. No jagged edges or blurry images will be seen in the combat, but the consequence is a rather small number of animations. Almost every spell uses basic and unimpressive graphics, while the lack of enemy variety is exacerbated by the same old enemies using the same old attacks in later battles. The graphics do look good, but there aren’t enough.

Archaic Sealed Heat does possess a New Game+ option, which serves to neuter the challenge by retaining almost everything from the end of the game. Otherwise there is no reason to replay it, and little reason to play it a first time, since its monotony will become overwhelming long before the credits roll. It would have been nice to fully understand the story, but leaving this game in Japan was no great loss to the English RPGamer community.