Developed by Luca Favano, Arcante harkens back to the older computer RPGs such as the Might and Magic and Wizardry series. It even advertises itself as an ‘old-school, first-person, party-based RPG’, retaining some old-school mechanics such as discovery through trial-and-error or having complete freedom to go wherever from the start of the journey. Arcante brings back the nostalgic exploration of its influences, yet it carries some of the bad traits of inconvenience whilst failing to incorporate the quality-of-life mechanics of the modern era.

Players begin the game by assembling a party of four characters, followed by choosing the gender, a character portrait for each character, where to allocate attribute points, and a class from the five choices of paladin, druid, thief, warmage, and vampire. The main things separating the classes from each other are equipment use and abilities. Once the party is assembled, the game throws players out into the wild and does little to hold their hands. This freedom is daunting at first, but once players figure out the controls and complete the first few quests, the game can be quite addicting.

The adventure starts on the outskirts of Asthgar, a city the adventurers have been searching for but have somehow forgotten the reasons why. This lack of direction in the plot sets the tone on how the rest of the game’s story plays out — like something contrived from a drunken Dungeons & Dragons session. The adventurers are prompted to visit the city council of Asthgar, which is really just one bloke who complains of bandits outside the city walls and tells the adventurers that the villains are so weak that they can be defeated without weapons (which the party does not have at this point). Upon dispatching said bandits bare-handedly, the councilman will reward the party with money to buy equipment and direct them to more bandits, which in turn, leads to more quests, until eventually the party fights dragons. These quests are repetitive and lack suspense, but are fortunately short enough to keep the game’s pacing moving along sufficiently.

Once players reach the second town, which is only a few hours into the game, the pacing quickens in a glossed-over way. The second town has even fewer quests than the first, which at this point, players are almost at the end. It’s as if the story’s writer got tired and decided to wrap up the game as soon as possible, which leaves a very abrupt and contrived ending. 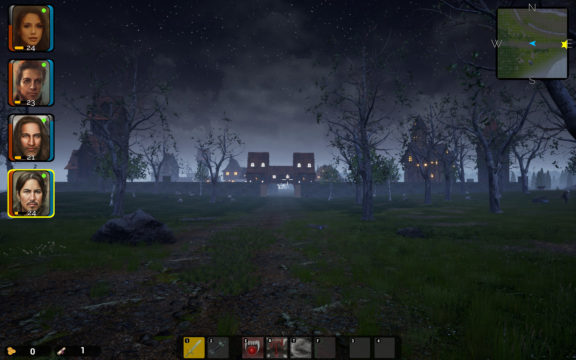 One of the two towns in the game. The other one looks much worse.

Aside from the main quest with an almost non-existent plot, there are a few sidequests that can net the party small rewards, but they are easily forgettable. The sidequests are always given by NPCs inside houses, as the NPCs outside the homes are mainly clones of just the same three or four character models, and the same two or three lines of useless information, thus lacking any personality. Besides the main quest giver in each town and the side quests, the two towns really feel like hubs for players to buy and sell items or stay at an inn. There are only a few dungeons and three small, overworld maps to explore with very little in between, so the world feels small, dull, and lifeless.

In graphical terms, the world of Arcante makes a passable use of the Unreal Engine. Some enemy models look decent, but the textures of the landscapes are plain, and villager character models are downright ugly. Moreover, the variety of enemies is lacking, and players will fight the same bandits, demons, centaurs, and dragons over and over again. Since most of the quests involve hunting down a certain enemy, the game becomes a repetitive cycle of mundane battles.

The greatest strength of this game lies in the combat. Each character has an option of a normal attack or a special ability, which uses mana and varies depending on the class. For instance, warmages utilise heavy damage-dealing attacks, and paladins can heal the entire party at once. Each class starts with only one ability, but acquires more upon levelling up for a maximum of four abilities total. Although this may sound extremely limited, it works well enough for the simplicity of this game, and each class has at least one useful ability that stands out from the rest. 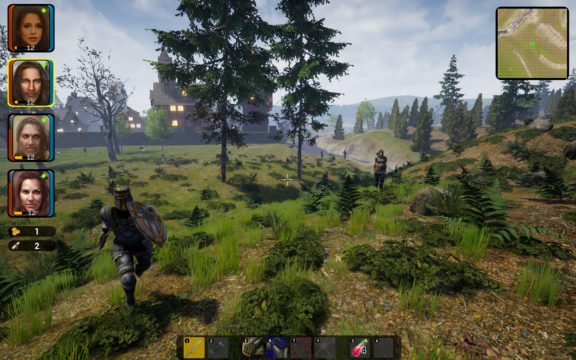 Meet the bandits – one of the few enemy types in the game.

The problem with combat is that enemies are about as daft as they come. Demonic-looking creatures, who supposedly attack humans on sight, will leave the human bandits alone. However, both will join forces and attack the player if close enough, so the AI only recognises the player as the enemy and leaves every other NPC alone. Because of this method of ganging up on the player, a head-on charge against several enemies would be a suicidal tactic. But players can pull one enemy at a time from a large group with a projectile attack, and none of his allies would be ever the wiser. If an enemy wanders too far from its roaming area, it’ll simply run back to its site, even in the midst of battle. These patterns are easy to recognise early on and can be used to exploit the enemy AI, which really takes the immersion out of the game.

Besides combat, obtaining equipment offers a small amount of joy in Arcante. Since none of the party members start with any weapons, finding or buying the first weapons feels immensely rewarding. The same goes for armour. Unfortunately, there isn’t much variety to obtain; just the same types of weapons and armour with different stats. For instance, a player may get multiple claymores throughout the game, each with different stats, attribute bonuses, and level requirements. Had the game boasted a larger selection of inventory and enemies to fight, there might have been enough depth to stave off this bland repetition.

Party members can learn other abilities such as disarming traps or identifying items. These come in handy, because just about every chest comes with a damage-inflicting trap, and just about every item needs identifying to unlock its true stats. Merchants can identify items, but they charge money. Though these abilities are helpful, they feel tacked on because having them does not affect the gameplay in terms of engagement. Disarming traps comes automatically with the ability, as there is no input required on the player’s part. 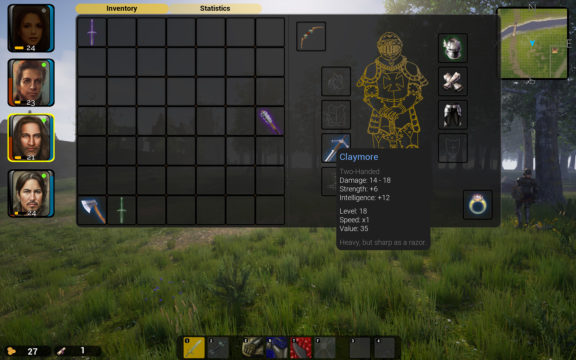 A claymore. Players will acquire many more of the same, just with different stats.

Another problem with Arcante is the abundance of bugs. One game-breaking bug causes a blackout across the entire screen that prevents the player from seeing anything except the pop-up menus. The only way to resolve this was to exit out of the game and reboot it again. This bug occurred quite frequently to the point where it almost plagued each session. Other bugs involve getting stuck on objects or having trouble navigating certain terrain, but these did not seem as severe.

The music of the game isn’t too bad. With the exception of the character creation screen and the introduction, there isn’t much of a soundtrack. The lack of music is not a bad thing, as the world tends to have its own ambient sound that comes from the player’s surroundings and interactions. These sound effects mainly come into play during battle when an enemy grunts whilst taking damage, or the characters unleash spells or swing weapons.

Despite all the problems Arcante has, it offers a fair degree of entertainment. The steam runs out after a few hours when players reach the second town, and by the end of the game, everything just falls apart due to the lack of depth and story to compel RPGamers to explore more of the lifeless world. However, for those who have nostalgia for the computer RPGs of the ’80s and ’90s, this may partially satisfy that craving — just don’t go into this game expecting much, because it feels incomplete.  At least the journey is very short and doesn’t overstay its welcome.