Compile Heart’s productions have a storied history here. Overcomplicated systems of earlier titles earned much ire, but the developer has since come in with some well-received titles such as Fairy Fencer F and Death end re;Quest, not to mention the popularity of the Neptunia series; its greatest successes usually coming when it stops itself from getting enamoured with gameplay complexity. Usually taking on tactical and turn-based titles, the developer has now given its attention to creating a full action RPG on its own in Arc of Alchemist, with previous ventures into the space often relying on the expertise of co-developers. Somehow, this attempt manages to find a weird spot where it manages to be both too simple and too complicated, as mind-numbing combat, unexplained systems, and a nothing story combine to offer a title that one can only hope is the first step in a learning process.

Arc of Alchemist dumps players into the middle of an expedition heading into the massive desert that has spread across the globe. This future version of the world seems doomed as the desert continues its spread into the small nations that remain. However, there is some hope left as tales tell of the “Great Power”, hidden somewhere within that may be able to save the world, with the remaining powers sending expeditions to try and find this final hope, along with anything else that may benefit them from the ruins of the past.

The entire story can be boiled down to a tiny number of event scenes across the ten-or-so hour span of the game. The big reveals have some scope to be interesting, but the way they are thrown about gives player no reason to care. That’s not to say these aren’t the only event scenes to witness, however. Every time players return to base, they will have to witness a short character-focused event usually involving a couple of members of the game’s one-dimensional cast. These event scenes have nothing to do with the actual plot, and are desperate failed attempts to show at least a thin veneer of character. Not one of the characters is given anything resembling a useful introduction that might attract any interest from players, and it feels that the events of the game would readily play out in the exact same way if none of them had been there. 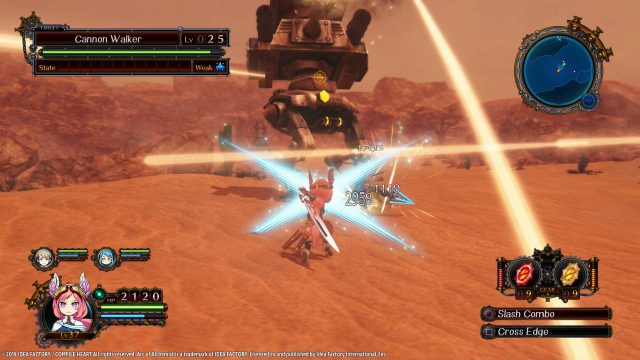 The hack-and-slash combat is mind-numbing with player actions having little to do in determining victory.

Combat sees one player-controlled character joined by two others that are controlled by the AI. The combat controls are very simple, with square button initiating ranged attack combo, while the circle button does the same for melee. Players can avoid attacks to some extent by constantly staying on the move, but actively dodging is not a reliable option and made effectively impossible when the camera is locked onto an enemy. There are some special attacks that can be used, though there’s very little reason to use them as most enemies either go down very quickly or are best avoided until the party is tougher. The result is that players feel like they have very little impact on success, and combat swiftly becomes a mindless experience of running around mashing the attack buttons, occasionally running away once something too tough is encountered. The fatigue of it overwhelms and gives an urge to get to the next event marker as quickly as possible just to try and break things up.

Despite the action itself being one-dimensional, Arc of Alchemist still features plenty of poorly-explained complexity that has a big effect on combat. While there is the straightforward XP-based leveling system, players are expected to also spend time and resources upgrading individual attributes and equipment. This is especially true towards the end, when experience points slow to a trickle after being liberally doled out at the start. Outfitting characters is not a straightforward process, as to unlock better equipment and passive abilities, players must first spend time and further resources enhancing their home base by investing in buildings and then placing them down as optimally as possible. Multiple playable characters are available, but the game gives absolutely no reason to deviate from the initial trio, and trying to outfit more than three characters is an unnecessary time-extensive endeavour. Some initial help screens explain the controls and menus, but the way these tutorials assault players at the start without providing any actual context for their importance ensures that they offer much more annoyance than assistance.

As players progress through the five areas of desert that appear in the game, they come across occasional roadblocks which must be dealt with using the Lunagear. This is a special apparatus that uses element orbs to create things like a fireball that melts ice, or blocks to jump upon to reach higher areas, though there’s very little to puzzle out. The Lunagear also provides some extra options in battle, sometimes turning the tide on its own. Arc of Alchemist’s balance is all over the place as enemies are regularly either trivial or next to impossible. The Lunagear is one part of that and unleashing a torrent of fire attacks from it makes utter mincemeat of a final boss that is otherwise very tough. There is one particular enemy type which appears constantly in the final stage that is a miserable experience to try and fight because simply hitting it is unnecessarily hard. 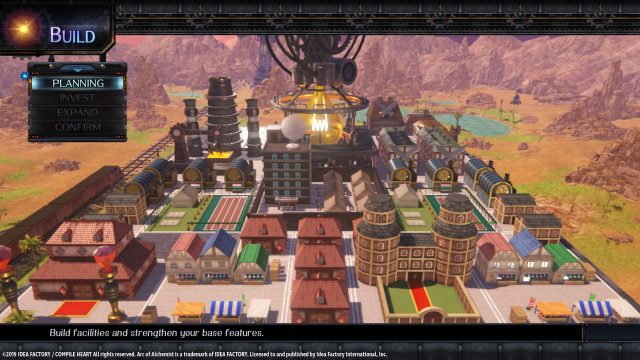 Building a decent base is pretty vital to progress. Unfortunately, the game offers no help in understanding that.

Arc of Alchemist‘s one bright spot is the music. The soundtrack is enjoyable, and though its catchiness doesn’t extend to once the controller is put down, it manages to stand on its own while everything else crumbles around it. There is Japanese-only voice acting, which is fine but easily ignored, particularly when one learns that the vast majority of the event scenes can be quickly skipped through without losing anything. Arc of Alchemist’s art style is distinctive but not particularly pleasing to look at or impressive when rendered in 3D, and the desert setting makes for locales that are uninspiring and, much like the rest of the game, immediately forgotten.

It’s very hard to find the positives from Arc of Alchemist. The music at least alleviates some of the monotony and players won’t need to spend too long with it to spark the ending credits, but the combat and systems contrive to make the gameplay far from enjoyable, and the story is almost not worth mentioning. One can only hope that it allows lessons to be quickly learned ahead of any future action RPG endeavours.