Rideon, Inc.’s Adventure Bar Story and I should have been a match made in RPG/simulation heaven. On the surface it has two main delights that I enjoy: shop simulation and pub grub. The idea of running your own tavern or bar in an RPG is seldom attempted, and if it is, they rarely cross the pond. While there are many fun aspects to Adventure Bar Story, it faces an equal amount of pitfalls as well.

Players take on the role of Siela, a young entrepreneur who runs a small bar with her sister, Kamerina. The two dream of vast success in the restaurant world, but unfortunately their business is threatened by poor sales and a rather creepy rival named Gustav, who wishes to ensure that their dreams of running a successful business fail miserably. Also, he’s a jerk who simply wants to expand his own restaurant empire. It’s up to Siela, however, to bring the folks of Casselburg into her bar and make her restaurant the most popular destination in town.

The main premise of Adventure Bar Story really isn’t anything spectacular. In a lot of ways the plot begins as a jumping-off point for the gameplay itself: cook food, find ingredients and build Siela’s popularity by raising the bar’s rank. It develops further to Siela must craft x item to save the kingdom and then everyone is hunky-dory. Yeah, this story is pretty bare-bones and easily not the main reason to play Adventure Bar Story. While there are some cute character moments, the plot and the way it advances is really the main issue that needs to be addressed. 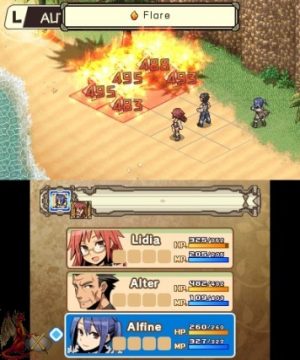 Plot happens randomly, and often it’s not easy for the player to gauge when a plot event is likely to occur. In fact, the game doesn’t give the player the best directions, which makes plot advancement much more of a guessing game later on. There’s no quest log or journal to inform players of events they’ve completed previously, so there’s a lot of stumbling around. The loose ordering of events does not help, either. It’s easy to explore parts of the game and just not encounter story for periods of time due to missed plot flags. Hitting high bar ranks can also make it tricky to make certain narrative events occur if they have not happened already. Adventure Bar Story really would have benefited from a quest or journal log, because it’s very easy to forget what goals have been accomplished and which ones still need completion.

Another issue connected to story, and to some extent the gameplay, is the game’s boring localization. For a game that should be oozing charm, the text is dull, uninspired, and it really doesn’t engage the player to care what characters are saying or the plot that is occurring. Coupled with typos here and there, it reads as a straight translation that lacks simple editing, making it lack personality.

While hitting some key lows, there are some high points in Adventure Bar Story. The main premise has Siela out in various environments, collecting materials or “mats” as they are affectionately called in the game, as a means to build her business. Mats are items that can be found in the environment that work as ingredients for crafting dishes, and are found freely throughout the game’s wide variety of areas. Areas open as the plot progresses, and new mats can be collected in each area. At the beginning of the game, exploring and collecting mats are crucial to item creation, but as Siela’s bar ranks up and more money is acquired, buying the staples doesn’t entirely drain the wallet. There is also a farm where Siela can plant seeds and acquire mats, though the seeds take roughly seven in-game days to produce a product.

Another means of gaining mats is through the game’s combat. Adventure Bar Story has a few unique twists in terms of its approach to combat and leveling. For starters, characters can only level up through eating dishes. Each dish has a certain amount of experience it provides, while also satisfying a character’s hunger level. This means that players cannot over feed a character to grind levels, but actually have to pace themselves. This is an interesting mechanic as it stops players from attempting to grind, but then one must ask: what is the point of having a combat system? 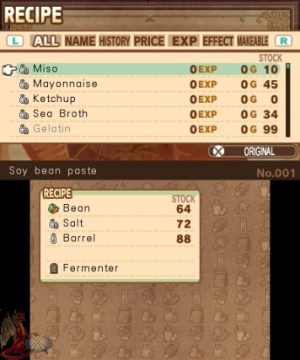 Combat in Adventure Bar Story is a standard turn-based affair without many frills. Characters will learn skills after combat, though each skill corresponds to a specific weapon type or magic. Players can mix and match weapons, opening new skills while closing off others because of the weapon requirement to use said skill. Completing battles awards skill points and mats that can be used by Siela in her recipes. Interestingly since players can’t exactly grind, players need to be cautious when picking their battles or areas of exploration, as it’s as easy to steamroll over enemies as it is to have one’s party completely destroyed. Saving often is critical in Adventure Bar Story because in more difficult areas, escape may not be an option.

Cooking is really the core of Adventure Bar Story and it’s easily the best part of the game. Players can find and purchase recipes, but the game is also open to players exploring combinations as well. Original recipes can result in failed dishes, but there’s a lot of self-satisfaction in figuring out recipes on one’s own. The game does provide some hints to recipe combinations as more items are made, which can be helpful when deciding what might be the next mat in the recipe. Once food is prepared it can either be eaten so that characters can level up or it can be sold in the restaurant for a reasonable to high price point. This is one of the ways in which Siela’s Bar Rank can increase. The other is through a regularly held cooking competition, which isn’t too hard to win if the player brings the best dishes currently possible.

Truthfully, crafting recipes and watching Siela’s sales grow is quite addictive. It’s easy to get caught up in the cooking process and see what can be made, what ingredients are missing to make better items, harvesting them, and then repeating the process. Watching one’s bar rank go up is really a satisfying process and the game does a great job of starting the player at a gradual pace until more recipes have been acquired. This aspect of the game’s pacing is quite remarkable, and it’s easy to get into the process and repeating it. It hooks the player in the same way the Atelier series does with its crafting system, which can be great for those who love that aspect. 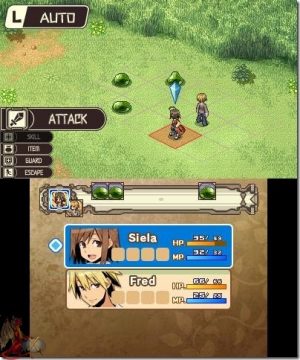 Although Adventure Bar Story has addictive qualities, it lacks in the audio and visual department. The graphics feel as though they were ripped out of older DS titles and that is not necessarily a bad thing. The visuals have a cute charm to them and the character portraits are very expressive, but to say it’s an impressive looking 3DS game in this day and age is out of the question. There’s a bareness to the environments, and the overall quality is simple and lacking excitement. The audio suffers the same fate with cute tunes that are great once, but don’t enhance the experience whatsoever.

I actually enjoyed my time with Adventure Bar Story, even with the frustrations I listed above. It was so easy to fall into the habit of collecting mats, crafting new dishes, and watching my bar’s popularity grow. I mean, I was rollin’ in the dough. Combat, while simplistic, never felt sluggish because I knew I was getting different kinds of mats out of it. At the end of every in-game day, I found myself becoming a compulsive mats collector, which I think is a point in the game’s favor. While Adventure Bar Story does have some rather large shortcomings, I cannot deny the amount of hours I sunk into the game, and the enjoyment it gave me.