Fellow Traveller and Jump Over the Age have announced that Citizen Sleeper‘s second free DLC will release on October 27, 2022. Episode: REFUGE is the second in the three-part DLC series and follows the events of Episode: FLUX. The third DLC is planned to launch in 2023.

Episode: REFUGE expands the story of the refugee flotilla that has arrived at the space station Erlin’s Eye and the wider story surrounding the Helion system. It introduces a new character, Sol, who is the captain of the Pilgrim Seed, the largest ship in the flotilla, and is a quiet pragmatist forced into the leadership position.

Citizen Sleeper casts players as a digitised human consciousness in an artificial body, on the run from the corporation that owns them. They end up on Erlin’s Eye, a ruined space station on the edges of the interstellar capitalist society. In order to survive and remain out of the clutches of the corporation, players need to find work and build relationships with individuals and factions on the station. The game is currently available digitally for PC, Mac, Xbox Series X|S, Xbox One, and Nintendo Switch. Those looking to read more about Citizen Sleeper can check out Pascal Tekaia’s review of its PC version. 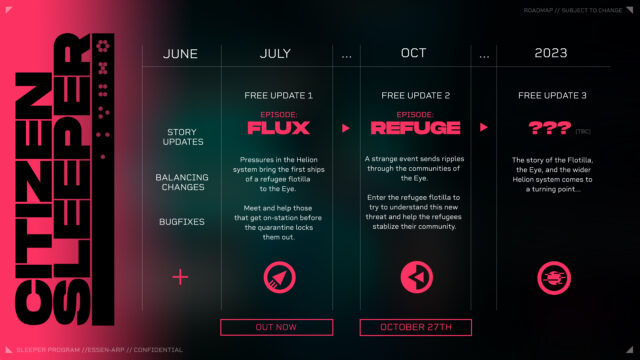