Square Enix and h.a.n.d.’s The Centennial Case: A Shijima Story is a new FMV mystery adventure available on PC, PlayStation 4, PlayStation 5, and Nintendo Switch. In addition to checking out the game, RPGamer was given the opportunity to put some questions to members of the team behind it — actors Yuta Hiraoka and Nanami Sakuraba, producer Junichi Ehara, director Koichiro Ito, and cinematographer Yasuhito Tachibana — and learn about its creation and some of the challenges involved.

Alex Fuller (RPGamer): Were there any differences in filming a live-action game as opposed to other roles?

Yuta Hiraoka (Lead Actor): One difference is that in a movie the story proceeds on its own as we view it, but in this case the scene changes according to the players’ selections.

This was a struggle for us in the beginning.

I believe a positive aspect in filming a live-action game is being able to have the actors say lines to each other and capture the atmosphere of the set within the footage, which is not possible in CG or animation.

Nanami Sakuraba (Lead Actor): Since it was a mystery game, it was different from other shoots in that we had to film various options, but most members of the filming crew had experience shooting dramas and commercials, so there was nothing particularly different with regards to the filming process.

AF: Were there any challenges in playing multiple major roles across different time periods? Does it make it easier having the same co-actors?

Hiroaka-san: In playing different roles across the same game, I thought it would be great to portray a difference in them from the contemporary characters. Each person is different, and if they are made to feel the same, the charm of the work is also reduced.

Having the same co-stars made me feel as though we were creating a theatrical stage production. By spending time on set with everyone, I feel we were able to communicate and think about our respective roles, which contributed positively to the project.

Sakuraba-san: Haruka, Iyo, and Yoshino, the characters I played, are all on a similar mission to solve a mystery, so it was a challenge to give a distinct performance for each. But the other cast members played their roles very differently, which in turn helped me to distinguish my roles as well. 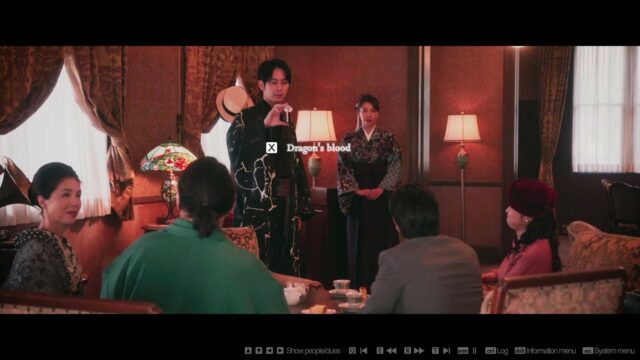 AF: What most excited you about the project?

Junichi Ehara (Producer): I liked mystery novels and mystery games, so I felt excited for the opportunity to create a mystery game.

Koichiro Ito (Director): I was excited to propose the mechanism of the same individuals in different roles appearing in three different eras as well as leverage the mechanism to design the mystery. The rest, I just put in steady work to bring this concept to fruition.

Yasuhito Tachibana (Cinematographer & Scenario Director): I was excited for the challenge of incorporating the qualities unique to live-action movies into the game.

AF: Do you have any favorite moments or memories from filming?

Ehara-san: In deciding the costumes, they were at times reflective of the world settings within the game, and at times the in-game world settings were decided based upon the chosen costumes. There were many parts that could not be chosen freely unlike a CG game, but that was a fun adjustment process rather than a difficult one.

Ito-san: I was delighted when Takaaki Enoki and Yuta Hiraoka were cast to co-star, the new and old actors who played Mitsuhiko Asami in the Mitsuhiko Asami series, a popular Japanese mystery film and TV drama based on a series of novels. Last spring, I was present every day for a month and a half of filming in 13 locations around the Kanto region, and it was a strange feeling to experience spring passing as the story unfolded.

Tachibana-san: There were several moments where the actor’s portrayals did not simply embody the scenario but gave it meaning beyond that. These include moments that created unexpected continuity in a multi-role system, despite the characters themselves being different.

AF: How were you able to make the different characters between time periods distinct?

Ehara-san: We wanted the players to immerse themselves in the mystery solving, so we tried to make it so that they would not be led astray by other things.

We’ve taken measures to simplify things; for example, specific characters may have easy-to-remember initials (like BB or MM), each cast member has a theme color, and each episode is focused on a single decade.

Ito-san: The same actor may wear Japanese or Western clothes depending on the time period, and this wardrobe distinction allows for characters to be told apart easily. It was also impactful that all of the actors acted with clear intention of the character differences while understanding the unique setting of this game. 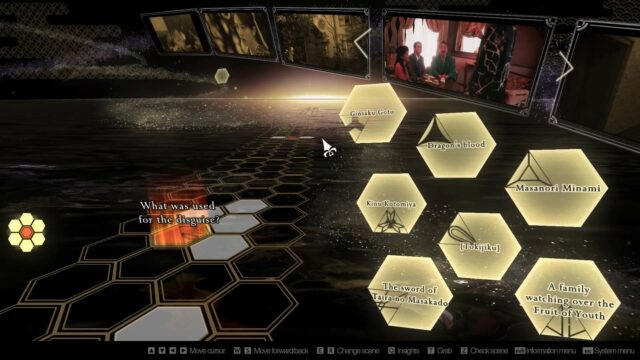 AF: Did the live action (or player interaction) element require any different approaches?

Ehara-san: This product is a game, after all, so we have created it with the intention of not having users have a moment where they release the controller. Under this principle, we’ve incorporated interactive elements and supportive features into the game.

Ito-san: We have made it so one can make some type of maneuver via the controller at any point, but it’s also important in this game for players to stop their controls and simply observe. There may be a key clue hidden within a subtle scene or dialogue. In order to make the story enjoyable from a detective’s perspective, we’ve made an effort for mysterious scenes to continue at a good pace, one after another.

AF: What storytelling opportunities did having multiple cases across different time periods allow?

Ehara-san: It’s a plus for players to be able to view Japan throughout many different eras, I believe. Also, this sets the stage to highlight the story’s theme, “What does it mean to age? To not age?”

Ito-san: When depicting a murder case that spans 100 years, we chose “eternal youth” and “life and death” as story themes. In recent years, research on anti-aging has progressed and is even said that a 150-year lifespan is upcoming. While I think this is something wonderful, I also believe that living a finite life and passing on the baton of the era to the future generations is meaningful. I hope that by seeing how the characters live and die within the story, one can reflect on the continuation of life.

AF: What are the challenges in creating a story that covers a wide time span?

Ito-san: I think it would have been easier to understand the transition of time if I could have depicted the story in detail, for example in 10-year increments. But we didn’t have that kind of leeway, so we’ve had to express the transition of time by dividing it into the present, 50 years ago, and 100 years ago. Although we relied on resources like documents and visual materials, I couldn’t help but to think of Japan 100 years ago as sort of a completely different world. 50 years ago was right around the time I was born, and I have a few memories of that time in my mind. I am expressing such nostalgia through the film and music. 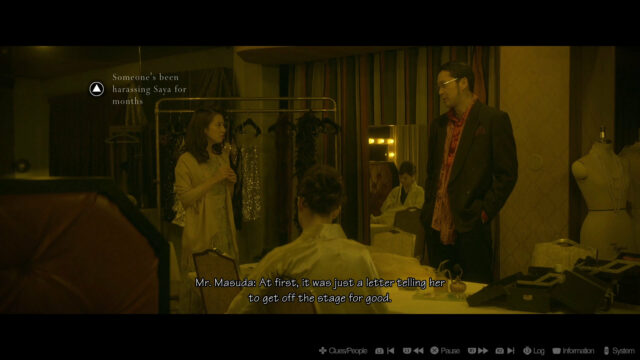 AF: How did you go about building up the cases and clues? Was there much of a challenge in making certain clues present but not too obvious?

Ito-san: Mysteries contain puzzles, and there are always clues to solve them. This game is about hiding these key clues within clues that seem important but are not, and having players select which ones to retain and discard. As you progress to the later stages of the game, there are more fake clues and hypotheses that can lead the guesses astray. That being said, having too many fake clues to one truth is stressful, so we sought out the perfect balance with the lead planner.

In the “Reasoning Phase”, you can create various hypotheses, both correct and incorrect. However, the culprit, and their decisive method (or fatal mistake) can never be made out to be a hypothesis. We wanted the players themselves to realize the core truths, and we took care as to not take away from that enjoyment.

AF: How challenging and/or enjoyable was it to create incorrect hypotheses?

Ito-san: Once the script was complete, we had the staff read it and try making deductions on their own. Within those there were correct guesses as well as incorrect guesses, so we adopted those as incorrect hypotheses. However, everyone had a high level of deductive ability, and there were times where no out-of-the-box-type guesses came out. In times like those, the lead planner and I would work together, Watson-style, to come up with incorrect guesses. So please forgive us if there are silly hypotheses, as we thought it was a way of taking a breather.

RPGamer would like to extend our deepest thanks to Yuta Hiraoka, Nanami Sakuraba, Junichi Ehara, Koichiro Ito, and Yasuhito Tachibana for taking the time to answer our questions. We’d also like to thank Fortyseven Communications for setting up the interview. The Centennial Case: A Shijima Story is available now for PC, PlayStation 4, PlayStation 5, and Nintendo Switch. Those looking to read more about the game can check out RPGamer’s Adventure Corner coverage.