Anuchard already looked the part of a cozy game to hop in and progress as time allows, and these refinements just make that easier.

Developer StellarNull and Publisher Freedom Games have given RPGamer another hands-off look at their upcoming game Anuchard in a more final build before the game releases on April 21, 2022 on various platforms.  Since last year the game has refined itself into a fast-paced action RPG with humour and kinetic puzzles.  Wearing some influences from earlier era RPGs on its sleeve, the mechanics and gameplay are dripping in nostalgia, but with a modern sheen.

Anuchard has players following the path of the Bellwielder, the hero chosen by the Audros Bell to restore the village of Orchard to its former glory.  The bell is inhabited by three spirits that provide instruction and comedic relief to the player.  Villagers have been disappearing into dungeons and while down there are turned into statues and separated from their souls.  The player delves into these dungeons solving puzzles and taking down bosses to rescue the lost souls making the townsfolk whole again.  Along the way, players will come across memory stones of the missing villagers to help illuminate their final thoughts.  The game also features comedic dialogue choices that to do not seriously affect the story.  The villains the players face will be more environmental in nature rather than a directed evildoer with a plan, making it different and interesting to see how that develops. 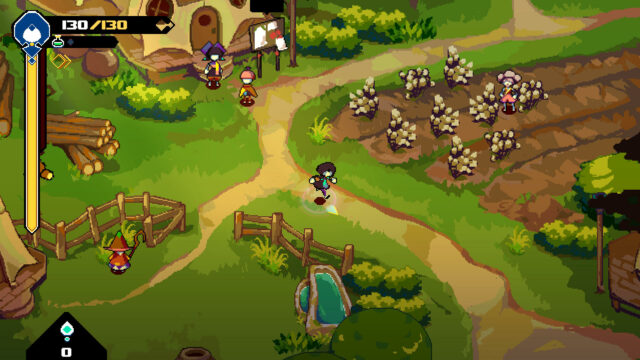 There are several roles that the townsfolk plays through the game such as chefs, herbalists, and cabbage farmers.  These helpers provide the player with ingredients and recipes that grant upgrades and buffs.  Recipes are simple, with many only needing two ingredients to craft a new item.  Recipes will still be varied as there are plenty of ingredients to collect.  Exploring Orchard has gotten a bit of an overhaul as well, with new villagers, and a bulletin board update to make it easier to see side quests and missing persons.  Other than these diversions the main goal of the game is to save everyone and rebuild the village.

Puzzles are still very reliant on the bouncing mechanic introduced previously.  By using the bell, the wielder can create a kinetic ball of energy that can bypass walls, but explode on contact with enemies or obstacles such as cabbage patches.  These puzzles will grow in complexity as the game continues but are confined mostly to precise aiming with this kinetic component.  The general layout of each dungeon is linear in progression by solving puzzles to reach the boss and save a new soul, with a few side paths for upgrades. 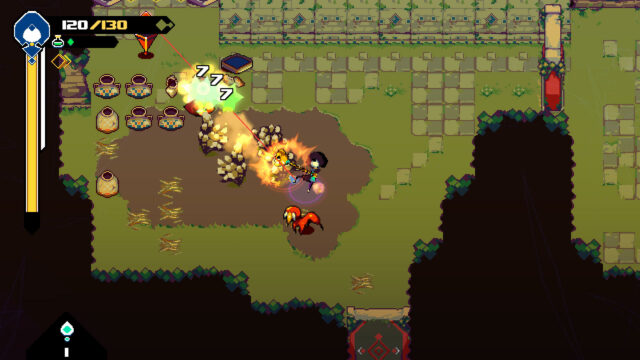 In combat, the wielder finds that the bell is able to slam enemies around easily.  This is done to great effect causing more damage to enemies but is also used to deplete enemy shields so they can take hits.  Bouncing off walls is the only way to deplete shields as hitting another enemy will result in no damage if they both have shields up.  The boss at the end of the demo happened to have regenerating shields so jostling this enemy off the foundations more frequently is needed to take them down.  Enemies in the dungeons don’t respawn, which can make collecting essence difficult, but grass in certain rooms does re-grow for farming purposes.  Essence is useful for the collection of healing beacons and defensive turrets that can be placed wherever the player likes and act as waypoints if needed along the dungeon’s path.

Anuchard still feels vibrant with lovely colour shades in town and in the dungeon.  The new preview only showed off the designs of a few new statues and the bell spirits who all inject humour into every moment.  The designs of the spirits are unique, even if the brief dialogue has them feel interchangeable with each other.  Cabbage patches fill up the screen as new obstacles to liven the dungeon even though they are just a different shade of green.  This was not a preview that showcased any new audio or visuals, instead opting to share what has been refined, including new characters to make the village feel more alive.

Anuchard already looked the part of a cozy game to hop in and progress as time allows, and these refinements just make that easier.  Dungeons are quick jaunts so exploring to save the souls of Orchard will feel breezy and moments of levity to be brought by the bell spirits while the memory stones add depth to the characters.  Add a variety of kinetic puzzles to test player’s skills, with enemies bouncing around the screen, and Anuchard is shaping up to be an enjoyable experience.