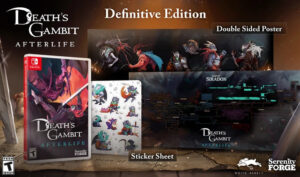 Death’s Gambit is a 2D action RPG where players take on the role of the Reaper of Death in a gothic world filled with challenging beasts, knights, undead guardians, and more. The game originally released in 2018 for PlayStation 4 and PC. Afterlife includes ten new levels featuring six new bosses, twenty-two new weapons, multiple endings, and an expansion to the game’s talent tree, bringing its total to over 100 talents.