As impressive as part one was, part two of Fantasian advances its intriguing story with enhanced gameplay mechanics such as a new travel mode, an upgraded battle system, and open exploration of its unique life-like 3D dioramas, all of which are upheld by a pleasing soundtrack.

Mobile RPGs don’t often earn much praise, but Fantasian is no ordinary mobile RPG. For those unfamiliar with this exquisite title, check out my first impression of part one. Now having enjoyed a good portion of the recently launched second part, I have a renewed impression as the title pivots from where it left off. The turn-based JRPG is enhanced with new additions as the story expands and continues its console-caliber gameplay. Though it isn’t hindered by its mobile underpinnings, I would love to see a console port and would gladly play through both parts one and two on a big screen. In any case, Fantasian does not disappoint. 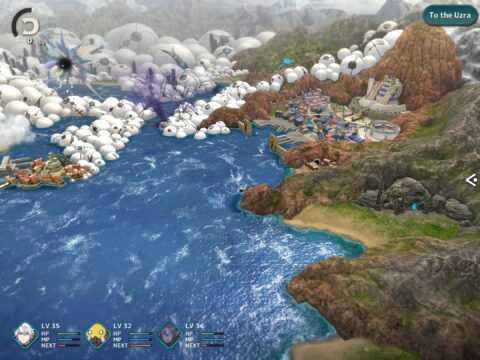 The beautiful overworld map begs to be explored by either walking or sailing — will an airship be revealed?

With the release of the second part, Fantasian is now less story-driven and more quest-driven. As the game opens up, players will enjoy a less linear approach, which is similar to classic Final Fantasy titles where the initial gameplay feels like it’s on rails for a while before it widens at a major plot point. Gamers can freely explore the beautiful settings across the world map, warping at will for fast travel. Also early on, players can control an exotic cruiseship-like vessel to venture across foreign tides. While new lands are accessible, they’re often not hospitable since local monsters outrank the player. When unsure where to go next, players may check the useful story/quest log that lists active and completed game segments. Quests, which complement the main plot, surprise with not only useful reward items but also intriguing bits of story, compelling players to complete more of these subplots.

Additionally, questing allows players to explore the gorgeous dioramas, beholding the masterful artistic scenery. These are combined with computer-generated effects and fluid animations that never lag, drop frames, or pixelate with jaggies; resolution is tack-sharp. While the graphics are as beautiful as before, in my case, they’re also improved since I played part one on my 5.5” iPhone and am now gaming on my 10.2” iPad where I see more details. Switching from one device to the other is seamless with Apple Arcade and its iCloud backbone. 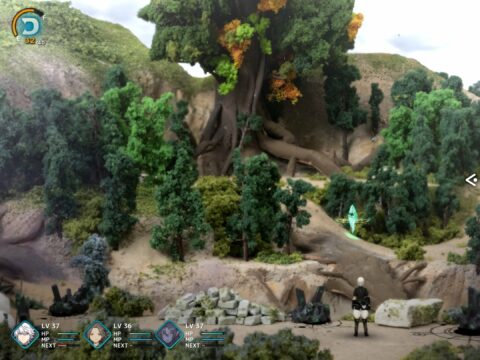 Another lush diorama to stroll through – but beware of insidious monsters haunting your steps, or send them to the Dimengeon.

Interacting with the game’s characters, players will notice the lack of voice acting is a benefit rather than a detriment. While vocalized human speech strengthens character development in a game, there’s value in Fantasian’s approach, which eschews voice talent in favor of Nobuo Uematsu’s excellent soundtrack. The absence of voiceovers lets the music stand alone, which is the key to emotional engagement while reading characters’ speech bubbles in story scenes. Fans of early Final Fantasy games will recognize this immersive musical approach, in which Uematsu’s talented scoring is subtly powerful at drawing the player into the story. Whether omitting voice acting was due to a technical limitation or was an artistic choice, its absence is a sound fact. On that note, the official Fantasian soundtrack is available on Apple Music, so players can first sample the game’s convincing score by itself.

Other impressive advancements in part two are the Growth Map and equipment upgrading. The Growth Map builds up party members utilizing a grid system similar to the Final Fantasy X Sphere Grid. It uses skill points, earned in battle from leveling up experience, to obtain new stat boosts or abilities, both of which are necessary to advance. Next to that is the added capability to upgrade weapons and armor. Swords and vests, for example, can now be leveled up using money and found items via a very simplified crafting system. Not only can weapons gain stat boosts, like Strength +3, they can also be imbued with extra abilities like HP Gain or Attack Up after defeating enemies in battle. 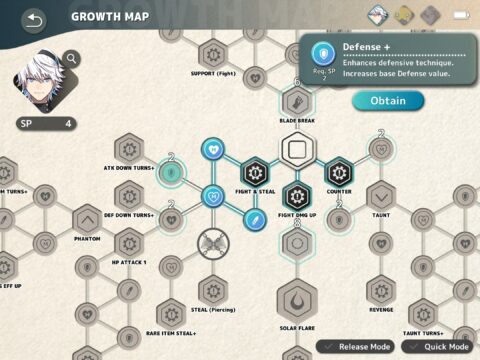 No, this is not Final Fantasy X. Nor is it a love-letter to the Sphere Grid. But it’s worth every skill point players can gain.

Speaking of battle, the Dimengeon system was already a great combat mechanic in part one, allowing players to more loosely explore areas, avoid random encounters, and mitigate the need to grind. It also employed “gimmicks” to aid a 3-party team against multiple combatants. In part two, a new addition to battling is the Tension system. Like Limit Breaks, it allows the character to fill a Tension gauge by both inflicting and incurring damage. Once filled, new special abilities that resemble cinematic summons — which vary per character and are unlocked in the Growth Map — can be used. The challenge/reward loop of gaining new skills to fight increasingly difficult enemies as the story escalates is very well balanced and satisfying. Another nice addition is the simple ability to change out characters mid-battle without losing a turn, which adds a level of strategy by choosing which party member’s skill is most needed at a given moment as characters largely don’t share abilities. 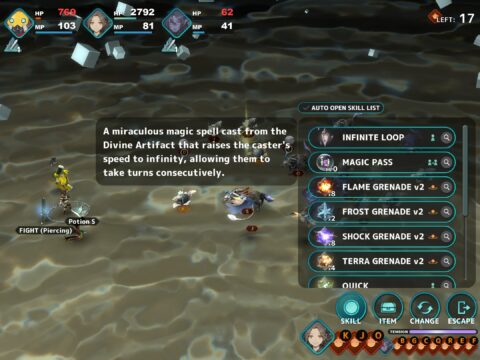 Once the Tension Gauge is filled, a party member may access a special summon-like ability, such as Infinite Loop, that can turn the tide of battle.

As impressive as part one was, part two of Fantasian advances its intriguing story with enhanced gameplay mechanics such as a new travel mode, an upgraded battle system, and open exploration of its unique life-like 3D dioramas, all of which are upheld by a pleasing soundtrack. It looks to give players great RPG fulfillment as the combat, world, and characters are well planned and executed. With 40 to 60 additional hours of gameplay in part two, players will be eager to see what’s next as Leo and his party reunite, following the dramatic cliffhanger events of part one. Fantasian is proving to be a fun and engaging game that raises the bar for mobile JRPGs, but it also deserves to someday be playable on home consoles and PC, allowing the impressive title to be enjoyed by as many gamers as possible.