Skill Trajectories and the Dimengeon make Fantasian‘s battle system one of the most enjoyable aspects of the game.

Having played much of Mistwalker’s new hybrid sci-fi/fantasy RPG, Fantasian, I’m hooked. Going in, I had high expectations of the game directed by the venerable creator of Final Fantasy, Hironobu Sakaguchi. The main doubt, though, was not about the potential quality of the game but rather its accessibility. The promise of Fantasian is a console-like RPG designed for a mobile touchscreen, but does the lack of physical buttons and the constraint of a small screen provide an obstacle? To the contrary. It not only works, but it also raises the standard for mobile RPGs.

Fantasian is available in the subscription service Apple Arcade, so the RPG doesn’t have in-app purchases, gacha mechanics, or ads. The pure gameplay also omits a digital faux cross-pad on the small touch display, so a player’s thumb won’t get sweaty, sticky, or slippery. Instead, players simply tap the point where the character should move to. It works well, with occasionally minor missed taps, so it isn’t frustrating. A convenient feature that helps with movement is the map view. Therein are several red pin-point arrows across the environment map. Tap an arrow, then tap the “Move” button, and then the map view will disappear while the character quickly runs to the arrow’s point. Also, the amount that fingers obscure the gameplay is minimal, thanks to the few on-screen buttons being well placed. The elegant user interaction scheme performs with aplomb and lets Fantasian shine. 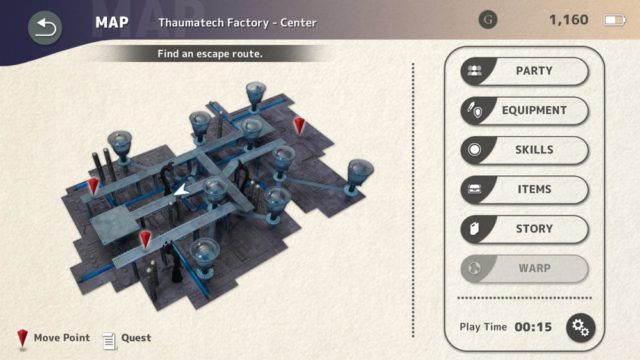 The dramatic story in Fantasian, reminiscent of classic JRPGs, is a simple tale of good versus evil, but it’s nonetheless intriguing. The player assumes the role of the main character, Leo, who has amnesia. This effective yet overused plot device allows the player to discover things along with Leo and his party members. The individual characters’ personalities and roles are adequate, but most interesting are their interactions, with Leo’s memory loss about certain relationships adding awkwardness or humor to the drama. The lighthearted moments help balance the mysterious narrative as the world of Fantasian is threatened with impending doom.

Speaking of the dramatic, the game’s engaging battle system innovates with a novel approach to random encounters. It’s called the Dimengeon. Although it sounds foreboding, players will enjoy visiting this interstitial space when the time is right. Mistwalker smartly sets up the Dimengeon early in the game by allowing the player to be sporadically hit with invisible monsters while traversing certain areas. This interrupting grind evokes the feeling of old Final Fantasy games. When the Dimengeon is available, enemies are automatically whisked away and stored up as the player explores Fantasian‘s various environs. Players strategically choose when to access the Dimengeon for mass monster melee combat. Therein, a new mechanic called Gimmicks is employed. This causes random stat boost objects to appear dispersed amidst the enemies. Targeting Gimmicks provides one or more characters with temporary extra buffs to balance combat. Otherwise, thirty monsters versus three party members leans towards a world of ruin. 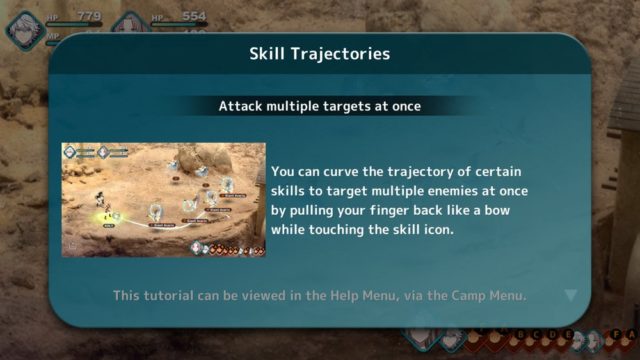 Adding more strategic fun to the battle system is a mechanic called Skill Trajectories. The player can chain enemies together along linear or curved paths. This allows attacks to target multiple enemies in one strike. Deploying such an attack with the touch controls is more interactive than a simple button tap. The player must tap and drag a finger to “pull” the attack line as a bowstring, which causes the line to change direction or curvature. This also challenges the player to observe the enemy lineup and optimize the attack path. While it’s possible to target two or three enemies, other times four or five will fall in line. Similarly, one particular character has a skill that targets monsters in a circular area, like a bomb’s blast radius. The player will enjoy targeting tight clusters of monsters in order to inflict maximum damage in a single blow. Skill Trajectories and the Dimengeon make Fantasian‘s battle system one of the most enjoyable aspects of the game.

The visuals are also remarkable. Scenes made with hand-crafted dioramas come alive in partial 3D fashion. Instead of a free 360-degree camera, each game area has several specific views within the detailed environments. This might seem restrictive or linear, but the constrained diorama perspectives are clever. Often while navigating the beautiful spaces, the player must venture far enough down a path to cause the camera angle to shift and reveal a hidden treasure chest. It makes exploration more enjoyable due to the surprise of discovery. The dioramas are splendid to behold from various angles, like turning a faceted gemstone in the light to reflect its brilliance. 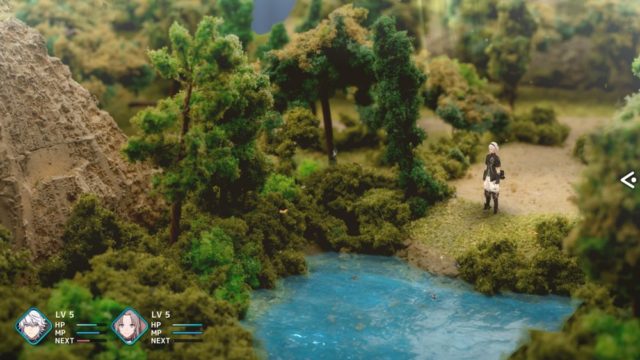 A detailed forest diorama made by hand.

Mistwalker’s overall presentation of Fantasian is polished wonderfully. The different aspects of the game — model objects, special effects, textures, and menus — are all top-tier quality. The game also presents story exposition cutscenes using lovely hand-drawn artwork overlaid with elegant text animation. Since the game’s graphics need to work beautifully also on older Apple hardware, the player should not expect hyper-realistic visuals. Nevertheless, there are a few negative points to mention. During action-packed cutscenes, sometimes the animation drops frames on a 2017 iPhone. Some gameplay areas don’t showcase the latest in dynamic lighting and shadows, and a few in-game character models look slightly polygonal. Besides those negligible nitpicks, the visual storytelling is striking.

To complement the visuals, Mistwalker employed legendary composer Nobuo Uematsu. His pedigree is impressive, so players are right to expect Fantasian‘s soundtrack to deliver exquisite aural pleasure. It does, and I very much look forward to the soundtrack becoming available outside of the game. Each track is layered with orchestral and electronic instrument sounds using deft precision. Some tracks are so ethereal that they captivate as with spellbound magic itself. While veteran Final Fantasy players will be able to note Uematsu’s fingerprints in the music, tracks are also new and diverse. Out of these tracks, one with beautiful female vocals caught me by surprise. Although I didn’t understand the lyrics, the talented singing drew me in.

Fantasian lacks character voice acting, so dialogue text is read by the player, which is another throwback to JRPGs of old. Though I’ve come to love voice acting in modern RPGs, its omission does not detract from the game. That said, I think its inclusion would have made Fantasian more impressive and immersive. 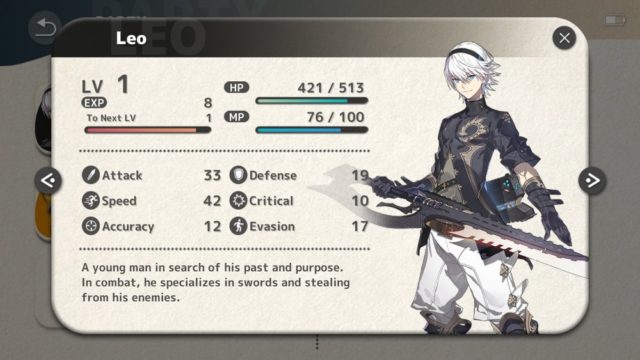 Presentation quality in Fantasian is high.

Fantasian is buffed with classic JRPG delights: mystery, drama, gemstone equipment, magic, stat boosts, intricate swords and armor, gorgeous artwork, generous save points, and more. I feel the comfortable pleasure of a classic Final Fantasy game with Fantasian, and that’s an accolade hard to top. This console-like RPG also achieved the feat of removing my preconceived desire to use a physical controller. I’ve quickly grown to enjoy the easy interaction of using my iPhone’s touch controls. Another testament to the game’s high mobile RPG standard is that I repeatedly crave more. When I put the game down to charge my iPhone, I can’t wait to jump back into it. The experience is satisfying, yet I hope Mistwalker plans many more Fantasian installments (or similar new games) in the future. At least for now, the more I play Fantasian, the more I relish its story and gameplay. I hope it ends as impressively as it begins.