Besides battling deadly foes, Wartales players must keep an eye on many aspects of their party if they wish to survive its merciless environment.

RPGamer was given the opportunity to talk with one of the members of Shiro Games about its upcoming title Wartales, as well as try out a demo of this open-world turn-based game. Both the talk and the first glimpse of the game promise an adventure that many players will enjoy, even when it includes a prevailing feeling of desolation, which ultimately generates a highly immersive experience. Besides battling deadly foes, Wartales players must keep an eye on many aspects of their party if they wish to survive its merciless environment.

The story references historical events but gives them a twist. It is set in medieval times at the moment of a terrible plague. This disease is transmitted by rats and can turn humans into Pestiferous, savage beasts that need to eat meat in order to control themselves, yet meat is a luxury most citizens can’t afford in these times. In addition, the cure of the plague is almost unattainable. As a consequence, players traverse a decaying world accompanied by a cruel vision of life in which dying is everyday news and acquiring basic things — food among them — is a challenge. Instead of using a fantastic medieval mood, Wartales focuses on the bleakness of the dark ages and manages to make it work.

Players take control of a band of mercenaries, in which there is no main character. This group of heroes can change its members since there are many recruitable characters and there is no way of bringing back dead mercenaries. Troops get hungry, sick, tired, and can even die from exhaustion if players don’t rest. Illnesses can affect the mercenaries’ fighting performance, and if their wages are not paid, they’ll get unhappy and leave the party. Warriors also acquire traits depending on what they have experienced throughout their journey, including both negative and positive aspects that may affect their fighting abilities. All these mechanics force players to keep an eye on many little details. The blend between its story and the considerable amount of mechanics readily delivers a sense of a hostile reality where surviving seems to be the sole purpose of life. 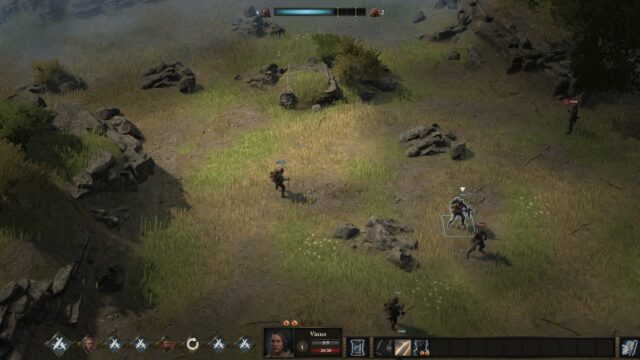 The enterprise for survival includes turn-based battles, where players move their warriors in a grid and choose actions to defeat their enemies. The scarcely restrictive grid grants the possibility of attacking in novel ways, and the environment also affects the effectiveness of actions. By leveling up, mercenaries receive new skills and boost their stats, yet their equipment is also crucial to make them stronger. The battle system blends nicely with the exploration and the rest of the mechanics, yet it seems unbalanced and few abilities were shown in the demo. However, the full game promises to deliver a more polished version, including abilities that are available in higher levels.

Party members can be given professions, such as thief, miner, and lumberjack. These professions are used to obtain different items while exploring the vast world and can also grant stat bonuses. Besides buying goods, players can use thieves to steal from shops or barrels. Nevertheless, the authorities notice when these acts are committed, and if a threshold is passed, the local guard will search for the perpetrators to make them pay for their crimes. Players also need to prospect using a miner or pick up minerals in order to repair their weapons and shields. There are various party aspects that players must also be aware of, such as the need to raise their influence in order to recruit new companions.

Players have the freedom to explore the vast regions and have many decision-making moments. For instance, they can bribe, persuade, or attack the guard of a mine. Wartales’ open world includes many different villages, shops, and quests. The demo takes place in only one region, but the full game will include around ten of them. Events happening in one region can affect others, for citizens can flee their homeland and find a new one in another region.

Wartales takes the darkness of medieval times to another level. The combination of the story, the open world, and the multiplicity of mechanics offers an immersive enterprise for survival, engaging players to mind their party’s needs. Wartales is expected to spend around a year in Early Access, which will start later this year, before its full release. For those who want to give it a try, a demo is available via Steam.