Adventure Corner: Emily is Away <3

In this edition of the column, we take a look at the latest installment in the Emily is Away series.

In 2008, I had been with my now-husband for two years. We met in 2006 during a university class on natural science that was mandatory for students in arts to take. I was peppy at 8 am, and he was… barely awake. During the beginning of the Facebook craze, students everywhere were captivated by the platform and the ability to snoop on their friends. You found out who was dating, who was having a party, who had sadly been broken up with, who cheated on whom — it was a plethora of information that was willingly provided by the participants. The platform has definitely grown and changed for both better and worse, with people able to both speak their mind and provide misinformation. In the third installment of the Emily is Away series, players are transported back to 2008, where Facebook quizzes and surveys reigned supreme, and relationship status was all that mattered.

The story begins with the player opening up a new “Facenook” profile because your best friend has stated it’s the “hippest place to be.” You’ve been told that AIM is dead and that Facenook is the only place to know the “haps” and who has the drama. Players create their profile and begin exploring Facenook. Mat, your best friend, enthusiastically tells you about what the capabilities of the platform are, but he also provides insight into some of your Facenook friends. You learn that Emily and Evelyn are only speaking to each other in song lyrics, you learn that Kelly, Mat’s girlfriend, is hopelessly in love with him, and perhaps you will be able to make some new friends. After conversing with some of the characters, the player is asked to make a choice between visiting Evelyn’s house party or going to Emily’s end-of-year BBQ. Whichever choice the player makes (and how they choose it) determines which girl you are going to befriend and possibly romance. The interface feels like the original Facebook in so many ways, from being able to see your daily feed to it updating as soon as new posts happen, and it even has the nostalgic poking feature, which I don’t exactly miss given my husband would never quit with it. 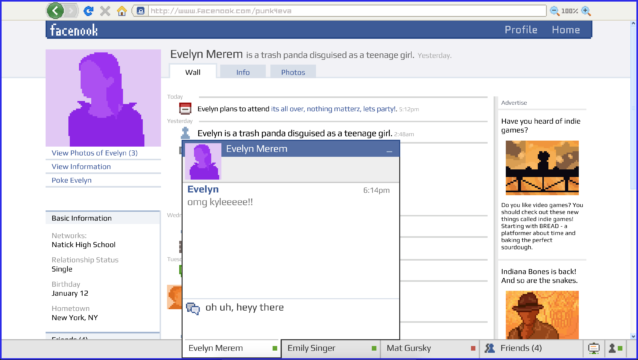 Evelyn is a trash panda disguised as a teenage girl.

The majority of this text adventure takes place in chats, where the player is provided three potential options of how to respond. The beauty in this, however, is that a lot of the presented options will change large portions of the story, so there’s no perfect way to know how your relationship with a character is going. In a lot of situations, most of the story plays out as messy high school drama, and the player character is constantly caught in the middle of trying to play peacemaker or stir up trouble. Every choice that you make determines how your senior year of high school will play out. Whatever way you play your protagonist, feelings are bound to be hurt, and the game does an amazing job of reminding the older players such as myself who grew up with the original version of Facebook just how dramatic and fake a lot of the platform felt, and still feels to this day. It’s so easy to misinterpret text and people’s motivations, and Emily is Away <3 reminds us how fragile our self-worth is as the story ramps up. Do you stop your girlfriend from hanging out with a guy who is flirting with her? Do you make the choice to bail on your girlfriend to help your best friend out? All these choices have consequences and determine the player’s self-worth.

Another amazing element in Emily is Away <3 is how it uses nostalgia to prey on the player’s emotions. Both Emily and Evelyn will make the player musical playlists, and they will be frequently updated throughout the game. My little emo self came back in full force playing this game, as music by Senses Fail, Alkaline Trio, Death Cab for Cutie, and Jack’s Mannequin are all heavily featured both in the playlists and as important parts of the conversations between the girls. During chats, players can click on a variety of links that will lead to different elements that can enhance the player’s experience. The game even reminds the player of horror films from 2008, popular memes, and the long-form Facebook surveys that would be passed around by friends the way old email chain letters did. The game’s presentation and soundtrack easily transport players back to 2008. 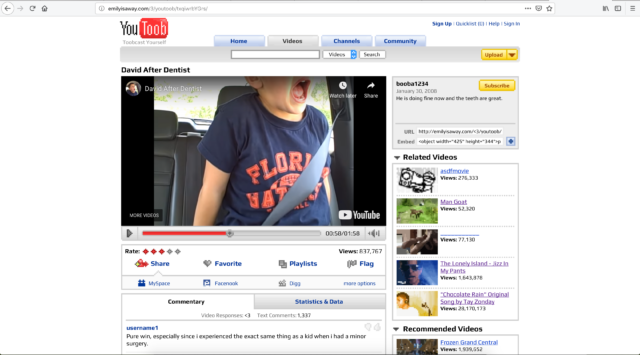 Checking out the latest nonsense on YouToob.

Emily is Away <3 is not my favourite of the series, but it is the one that has left me the most nostalgic in many ways. AIM was not a popular platform in Canada, so it’s not something I had an attachment to, but the early years of Facebook, while I don’t miss them, are something that this game heavily reminds me of. I don’t miss cryptic status updates or giving weird image gifts of thongs and kisses to my friends, but I appreciate the way this game translates the platform and reminds me how easily anything can be taken out of context and how digital our relationships have become. There are so many branching narratives in Emily is Away <3 that there is a lot of replay value here, and although this is the third installment, this one is more of a spiritual successor to the previous games and is a good jumping-on point. Emily is Away <3 is a great addition to this series and its fusing of nostalgia and teen angst is both masterful and emotionally exhausting.