If you enjoyed Dragon Quest of the Stars or Fire Emblem Heroes and are looking for a new mobile game in the series or genre, Dragon Quest Tact quite likely will scratch that itch.

New Dragon Quest titles have historically been system sellers for me, so when a new title is released on a platform I already own, it feels like a huge bonus. Needing nothing more than a mobile device to try out a beta version the new Dragon Quest Tact, I was excited to start. Having nothing but so-so feelings about the forgettable 2009 barebones DSi title, Dragon Quest Wars, I wanted to see a more fleshed-out tactical experience. After closing out Chapter 6 of Tact, effectively finishing the beta in a dozen or so hours, I was pleasantly surprised how far tactical DQ has come, but was bored of the repetitive grinding and unforgiving gacha mechanics about halfway through that time.

Story isn’t typically the strong point of many mobile RPGs, if indeed they have one. Tact’s likely won’t engage players a great deal, but there is a decent enough attempt to not knock it. Players find themselves as an unshown, silent human protagonist dropped into a world inhabited solely by Dragon Quest monsters who are quite surprised to see a real, live human. The chapters available in the beta test involve the player making friends with a pink sanguini monster and the slime, Majellan. The trio immediately begins trying to figure out why the protagonist has a rod that allows them to control monsters. Traveling to see the local king to ask about the rod is complicated by the fact there’s a long waiting list for an audience, but conveniently a monster tournament is taking place, and if one can just pass the gold level, the king will happily meet with them. 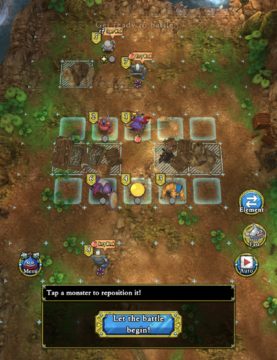 Battles allow for free movement before combat and show important resistances of opponents.

To win the tournament, players must build a team of up to six monster companions that can defeat other teams of monsters in tactical battles. The battles are the core gameplay mechanic and are done well. They play out on a grid overlaid on colorful locales complete with environmental blockages such as boulders, crates, and trees. Often the goal is to completely defeat the opposing teams, but occasionally battles will end with the defeat of a single leading monster. Rewards for winning include alchemy items, gold, and occasionally a new monster party member. Most levels also give premium currency, gems, as rewards for finishing battles in under 10 moves, under 5 moves, and finishing without a party member dying. Moving monsters around the battlefield is intuitive as is selecting attacks and targets. Convenient mechanics such as showing exactly how much HP various attacks will do and clearly understandable enemy strength and weakness icons make battles a fun time even for SRPG novices.

Getting new party members is the main collection aspect of Dragon Quest Tact and what players will likely spend the bulk of their premium currency on. While some serviceable monsters are obtained through the story, without the ones obtained via the monster scouting gacha mechanic, the sudden difficulty spike will quickly prevent players from getting more than a couple chapters deep into the story. Monsters are ranked from F to S, with S being the strongest. Once past the first story chapter, anything ranked C or lower falls quickly behind any other party members. Luckily, a couple of special tickets rewarded for completing challenges provided a pair of S-ranked monsters during the beta. These turned out to be invaluable as the sum total of 30 random draws using premium currency only netted two A-ranked monsters, two B-ranked ones and a pile of mainly useless C-ranked monsters. The final battle at the end of Chapter 6 required a great deal of grinding with other gameplay mechanics to even stand a chance of coming out on top. 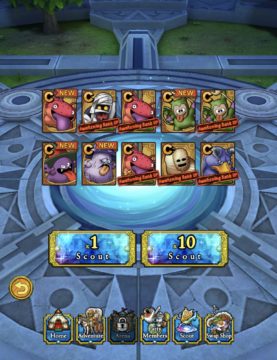 With no guaranteed good pulls, plenty of premium currency can be spent on poor draws like this.

Outside of the story mode, there are a plethora of other things to do in DQ Tact. There are event battles; daily experience and gold battles; and battles to earn weapons, rank-up items, and skill upgrade items; as well as a Battle Road that makes low-level monsters somewhat useful. All of these mechanics are necessary to boost your party enough to deal with the strong difficulty curve of story mode, but they unfortunately become repetitive almost immediately. Monsters are able to equip weapons such as swords, axes, and wands which can be obtained in battles specific to the weapon you’re trying to obtain. Multiples of weapons can be used in alchemy to strengthen others’ attributes such as attack power or increased HP. Monsters have low level caps that will be reached easily through story battles, but ranking up monsters by using crystals and orbs raises their maximum level and provides a significant boost to all stats. Skills and spells can be learned via leveling up or taught by certain obtained items and have the ability to be ranked up, but doing so only increases damage by near-insignificant, single-digit percentages.

While most battles in DQ Tact require the standard mobile mechanic of stamina, there is an area for players to continue when they’ve used all their stamina but wish to keep playing. The Battle Road is a series of challenges that cost zero stamina, but each come with its own monster types. One only allows rank D or lower monsters, one only Slime family monsters, one Beast family, etc. Here players can use many monsters that otherwise would prove worthless and get some minor benefits from leveling them up. There are global monster family levels that are determined by the sum of the levels of all monsters in a certain family. Reaching certain milestones grants a perk for all monsters of the family, but they’re quite minor. For example, a sum of 100 levels in a certain family grants those monsters a meager 1% higher HP. Despite the minor benefits, having the Battle Road always available to players is a big plus for DQ Tact. 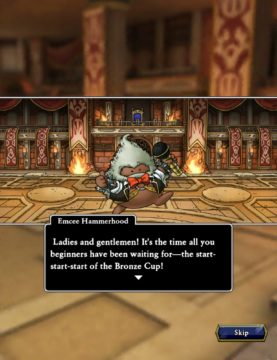 It wouldn’t be a Dragon Quest title without a strong pun game.

Graphically, DQ Tact looks beautiful. Monster animations are smooth and the battlefields have a good bit of visual variety. The music consists of a variety of tracks from different Dragon Quest games by series composer Koichi Sugiyama.  All are pretty good and fit the mood of the places they’re played.

Overall, RPGamers’ enjoyment of Dragon Quest Tact will come down their enjoyment of four things: SRPGs, Dragon Quest monsters, gacha mechanics with low odds of success, and incredibly repetitive gameplay loops. My love of Dragon Quest got me through the first half-dozen hours or so, but I idly turned to the AI to move through the majority of the grinding and a couple hours of story content that didn’t really move the narrative forward much. If you enjoyed Dragon Quest of the Stars or Fire Emblem Heroes and are looking for a new mobile game in the series or genre, Dragon Quest Tact quite likely will scratch that itch but it doesn’t do anything new or different enough to stick out beyond a few hours’ trial.

Disclosure: This article is based on an preview version of the game provided by the publisher.