If the amount of player choice and rich world-building in the demo is an indication, the final package has a good chance to satisfy.

If there’s anything games have taught us about the future, it’s that no matter whether we experience a zombie apocalypse, suffer the effects of nuclear fallout, or live in skyscraper mega-cities ruled by a corporate-run global government, the hope for a clean utopia with all the comforts and none of the drawbacks is nothing but a pipe dream. Enter Anshar Studios, whose cyberpunk title Gamedec follows in the footsteps of a number of recent successful titles that seriously blur the line between narrative-driven RPG and point-and-click adventure. Gamedec posits that in the aftermath of the 22nd century, most humans spend much of their time plugged into virtual gameworlds, necessitating the need for dedicated game detectives that can jack in to solve the many digital crimes that are committed.

The demo available as part of PAX Online allowed players to participate in one such investigation, or at least enough of it to whet the appetite and provide a sense of what the game’s all about. At the outset, players can choose from a number of character-building options, choosing an origin for their Gamedec as well as a specialization that will open or close specific path through the investigations to come. For example, having chosen the tech-savvy Glazier background, my protagonist was able to perform some on-the-spot hacking in a number of instances where another set of skills would have led to different outcomes. It’s unclear whether players will be locked into their chosen path in the final game, though it seems likely that other skill trees will also be available to proceed down as some actions during the demo netted experience points color-coded to match other specializations. 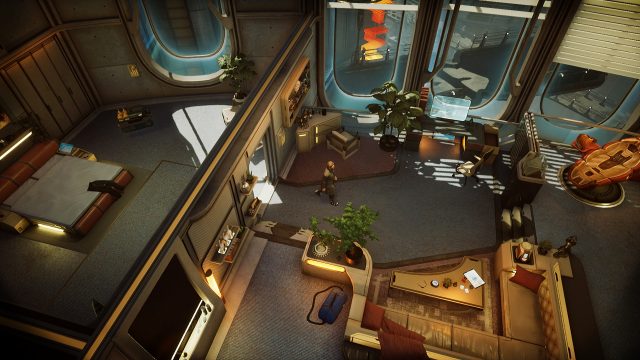 The Gamedec’s digs: shabby-chic and unassuming.

Waking in a mid-city apartment in Warsaw City, the first order of business is to check the computer in the hope of securing a new investigation assignment. Movement uses a purely point-and-click control scheme, as does exploration of the environments hotspot icons. Clicking on the bedroom window to take in the city outside provides a few more opportunities for character development, as the game offers the player the opportunity to choose from a list of responses how they feel about things they see in the outside world. It’s an interesting way to incorporate some early player agency in building their avatar, and it hopefully hints that much of the final game will be very choice-driven.

It also becomes clear early on that Gamedec is going to be a very text-heavy experience. As dialog and informational text boxes go by, continuous on-screen alerts let you know that the in-game codex is constantly being updated with further lengthy text passages about characters, locations, the current state of the world, its history, and the technological advancements within it. It’s absolutely essential stuff if the world-building is to be done properly, and it’s great that the developers aren’t skimping on this level of depth for those who want it. At the same time, it’s also putting most of one’s eggs in one basket, relying on the quality of the writing and how it all comes together to provide a sufficient level of immersion for the player. The demo provides enough reason to feel confident about the former, while the latter will require the full release to see how it all comes together.

After checking the apartment’s computer terminal, an investigation assignment has indeed arrived. A wealthy business tycoon is offering a job, but is requesting a direct meeting before disclosing further details. Before striking out on the new case, the player has the option to dabble in some other activities in the apartment, like calibrating their personal AI or ordering the purchase of some investment stocks. One of the social issues Gamedec concerns itself with is a recent technology that grants the ability to increase AI awareness to the point of making them fully sentient beings while remaining shackled to a predetermined role and owner. It seems clear that we can expect some heavy subject matter in the full game. 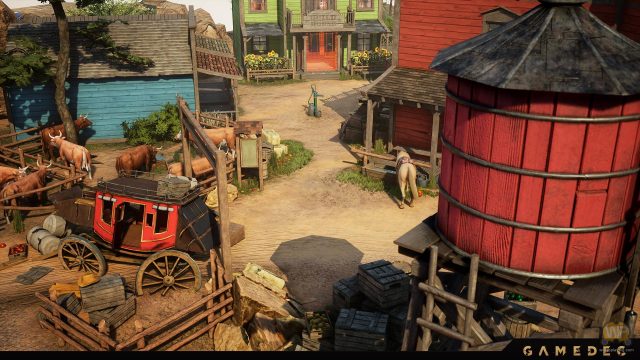 The virtual worlds players will visit run the gamut from sleazy to sleepy.

Arriving in the mogul’s private offices, we finally find out what the Gamedec’s newest assignment is: the man’s son and some of his friends are seemingly stuck in their virtual game, unable to return to the real world on their own. Finding out exactly in which virtual world the victims are stuck is the first order of business; actually jacking in yourself to pull them out the next. There seem to be a myriad of ways to approach the issue at hand, including hacking into the office’s private computer terminals for information, cracking the hidden floor safe, intimidating the crew’s only member to make it back to consciousness, and several others, all with possible success or fail states. Once a target destination is finally established, players can enter the virtual world themselves, at which point the demo begins a two-minute countdown to its end; we’ll have to wait until the game’s full release to explore further.

Gamedec already looks intriguing. The graphics are detailed, and the world they depict is certainly an interesting one. Being able to really soak it all in at one’s own pace will be key, as the amount of information thrown at the player via the virtual codex is, in a demo, quite overwhelming. It doesn’t help that, outside of the main menu, there’s no music in the game yet, so reading walls of text is accompanied by deafening silence. Ultimately, the game will probably live or die based on the strength of its investigative narrative, but not too much of that was evident yet. But if the amount of player choice and rich world-building in the demo is an indication, the final package has a good chance to satisfy.

Gamedec is slated to see a PC release later this year. A Nintendo Switch version has also been announced, with a targeted release window of 2021.