Looking Back at Dragon Quest

Dragon Warrior was released to the world on May 27, 1986, for the Nintendo Entertainment System. It is currently thirty-three years old — same age as me. Growing up I owned a NES, though my sibling wasn’t big on RPGs. He spent more time playing games like Skate or Die, while I grew a fondness for Final Fantasy. Being a kid, I subscribed to Nintendo Power, but never got Dragon Warrior. My first exposure with the series came much later when I got a cheap copy of Dragon Quest VIII for the PlayStation 2, popped it into my console and went “ewwww.” It wasn’t until my friendship with former Editor-in-Chief of RPGamer, Michael Cunningham, that Dragon Quest became a series I grew to appreciate.

Since the day Michael sent me a copy of Dragon Quest IV on the Nintendo DS, I have completed V, IX, XI, Heroes I and II, and Rocket Slime. I own nearly every single game in the series that has been released in English. My appreciation for the series has grown, but I never had a chance to play the original until current Editor-in-Chief, Alex Fuller, offered me a chance to play it last September when it released for the Nintendo Switch. 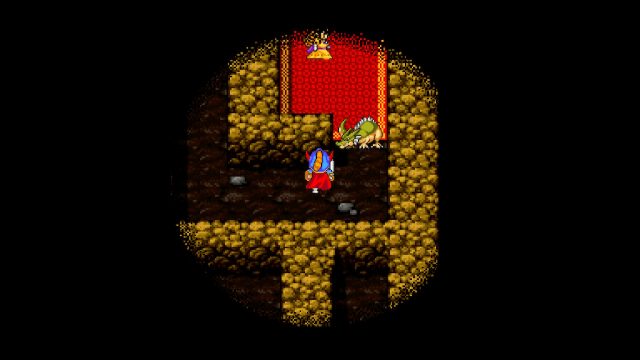 I booted the game up and immediately my jaw dropped in misery. It was a beautiful remake, but I was never good with games where subtle hinting was how you figured out progression. Frustrated, I put the game aside and decided I needed to be in a better mental state to tackle it. On and off I would grind levels for my protagonist, Bum — I apparently only name my protagonists stupid names — then get frustrated and put the game aside.

Then COVID-19 hit, everyone was asked to practice social distancing and be in quarantine, and suddenly I had a lot more free time on my hands. I am someone for whom work is a huge part of my routine, and then whatever free time I have left over goes to my chores and hobbies. Being discharged from my place of work while a pandemic is going on was thankfully the right choice, but it left me disoriented, frustrated, and out of sorts; the same damn feelings Dragon Quest evoked in me every time I tried to pick it up and play it. 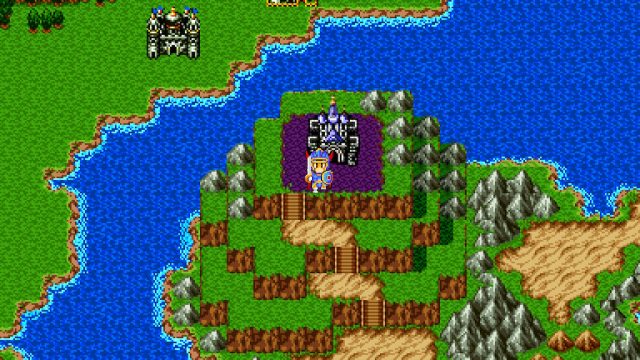 I had never played Dragon Quest, despite knowing all the corny jokes that came with it. On March 19th, my second day in quarantine, I posted a Twitter poll asking readers if I could complete Dragon Quest in a day, to which the response was 80% Yes, and 20% No. One of my library colleagues was convinced I couldn’t do it, so seeing that message lit a fire in me to prove him wrong, while taking a lot of screenshots to share my progress along the way.

I found new fun in a game that is archaic as all hell. Between giggling every time “Bum” had a gained a level or won the heart of a princess, to the anger I felt at having to redo the final boss more than ten times because the random number gods hated me, I felt a determination I hadn’t felt in years, with a game that was horrific at explaining itself. While the newer localization is better at articulating itself, I had moments where I’d read something and feel a bit clueless. Sometimes I needed to find an online guide because I couldn’t be arsed to deal with riddles. Cabin fever made me crazy for Dragon Quest, a sense of necessity to complete the game took hold of me. 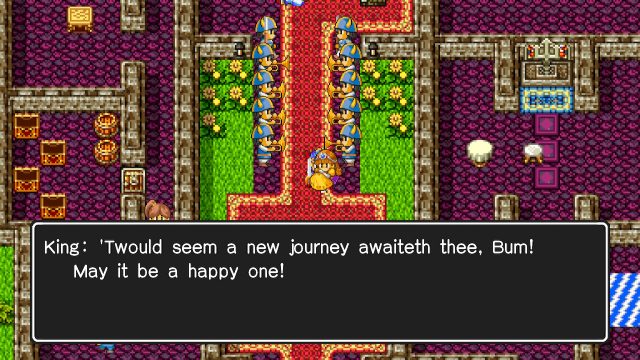 Bum defeated the Dragon Lord at level twenty-two, won the heart of a princess, and became King of the realm. Storytelling in 1986 was an afterthought, and repetition in mechanics were key to success in games like Dragon Quest. However, there was something which I grew to appreciate, in a way I hadn’t when first I tried the game: the greater sense of exploration. That was huge for its time! The fact that you could do quests out of order, equally unheard of! I found on numerous occasions that I had come across items for different quests much earlier than intended, particularly when I found the Token of Erdrick before having even fought the Golem boss. There was more freedom in Dragon Quest, compared to what we expect now with a lot of RPGs and even recent Dragon Quest games.

While COVID-19 has forced me into isolation, I appreciate what it’s done in terms of helping me explore a game like Dragon Quest. While the game is old, outdated, and cumbersome to play, it has done so much in terms of creating a framework for the RPGs we’ve come to love over the years. The series has now evolved into something so wonderful, while still staying completely true to its roots. Playing Dragon Quest for the first time allowed me to reconcile frustrations I had with the series, while also grow to appreciate how far the series has come in thirty-three years. Dragon Quest is for a patient gamer, one who can piece things together — that is not me in the slightest. What I will say is that I enjoyed my time with the game despite its antiquated design, though I don’t know if it will ever be a game I revisit again.

I do think it is worth going back to older games and seeing their place in history and time. Was Dragon Quest worth the frustrations I felt? Believe it or not, yes, because it gave me a sense of understanding; why people are ride-or-die for this series, why it has evolved the way it has, and ultimately, how it managed to capture the hearts of gamers, since 1986.