Turn order is heavily randomized, so the mages may get several turns in a row before the Nemesis acts, or vice versa.

Aeon’s End is a tabletop game that, like many before it, is making the leap to the digital world.  In a world where the Nameless is about to overrun the city of Gravehold, it’s up to a party of up to four mages to protect the city against one of four major Nemeses. 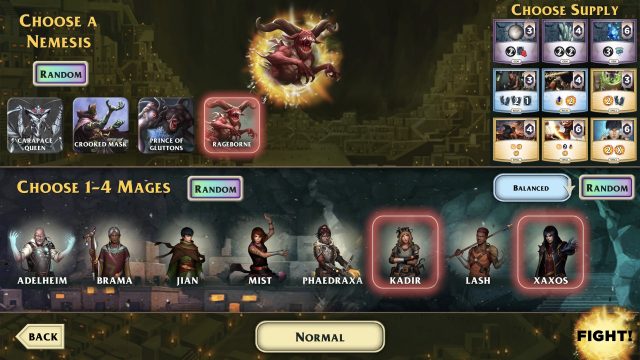 Once a Nemesis and up to four mages have been chosen, the face-off begins.  Turn order is heavily randomized, so the mages may get several turns in a row before the Nemesis acts, or vice versa.  This unpredictability makes each game flow a little differently and adds a tense mood to the whole experience.  For those who want to tweak their experience by raising or lowering the hit points of the mages, Nemesis, and Gravehold itself, multiple difficulty levels are available including Beginner, Normal, Expert, and Extinction.

Players lose if either Gravehold or all mages drop down to zero hit points, so balancing defending both the party and the hold, and attacking the Nemesis is crucial.  Each Nemesis also has its own strengths, weaknesses, and special rules.  The base game comes with four Nemeses to choose from, though the board game has many more due to profligate expansions.

Each turn, players choose aether gems to play, and these gems power spells and abilities that can be cast either immediately or in the future.  In addition, players can charge up each mage’s special power, which is also done by spending aether, so players need to decide if spending their crystals immediately for defence or if they’re willing to save up for bigger attacks later down the line.  Similar to games like Dominion, players are building a deck from their purchases each turn.  However, unlike most other games, the deck in Aeon’s End isn’t shuffled, so discard order is incredibly important. 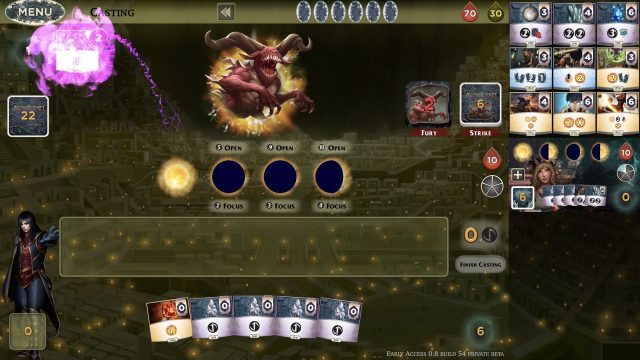 Playing crystals, buying more crystals, casting spells, charging up abilities, attacking and defending — there’s a lot to keep track of, but heroes will make it all work.  The PC version of Aeon’s End is available now on Steam Early Access, while the iOS and Android versions will have a release date announced in the near future.