In its final RPG reveal, Limited Run Games announced that it has partnered with Deep Silver and Ys Net to be the exclusive distributor in North America of Shenmue III‘s collector’s edition. The edition includes a copy of the game for PlayStation 4 or PC, a set of iron-on patches, a set of stickers, a double-sided mirror, and a Shoji-styled desk lamp. The edition will be limited to 4,000 copies on PlayStation 4 and 1,000 copies on PC and released on November 19, 2019. A regular physical edition will be distributed by Deep Silver. 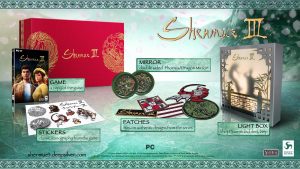