NIS America has announced that it will releasing Nihon Falcom’s The Legend of Heroes: Trails of Cold Steel III in North America and Europe. The game will be released exclusively for PlayStation 4 sometime in the fall of 2019. A limited Thors Academy Edition can be pre-ordered from NIS America’s North American online store now and will be available to pre-order from the company’s European store from noon GMT tomorrow. The edition is priced at $99.99 and contains: 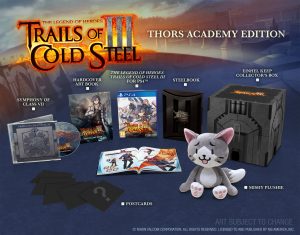