Nelke and the Legendary Alchemists: Ateliers of the New World TGS Impression

I have been having some mixed feelings on the Atelier series as of late. It’s generally been go-to comfort food for me, though this last subseries rubbed me the wrong way on so many levels. I was hesitant going into demoing Nelke and the Legendary Alchemists: Ateliers of the New World, but I told myself to give it a chance and see where this new installment takes me.

First, I want to point out that Koei Tecmo actually had a partially-localized demo for English speakers. When they set me up at my station for the Nintendo Switch version, I was treated to English text for my experience, something which pleasantly surprised me, because I was expecting to fumble through the demo in Japanese. The demo was roughly the first twenty minutes of the game, and it gave me a taste for both combat and the town-building mechanics. I want to say how impressed I was with the partial localization, it was full of energy and entertainment, and it did a great job bringing the cast to life. Marie and Elie, from the original Atelier games, made an appearance in the demo and I loved see what their personalities entailed! 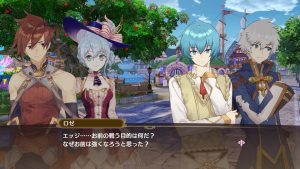 Secondly, the town-building mechanics were intriguing to say the least. The beginning of the demo sees Nelke, our heroine, trying to revitalize a a town on the decline, and wanting to transform it into a hub where people can gather and potentially move into. Nelke is very much a businesswoman, and the game stems from this idea of building a town and transforming it into a tourist destination of sorts. What I loved was how the game encourages the player to build the town, however which way they desire, though it takes time for buildings to be erected. Nelke only works during weekdays, and on holidays, she is allowed to befriend other people in the town, or take a break and explore locations around the town. I think this mechanic, as similar as it is to Atelier Meruru, is going to be an addictive element for many players, where as combat may be the struggling factor here. 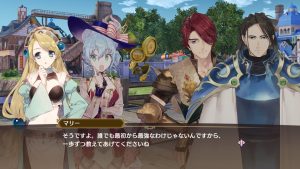 It is abundantly clear that combat is not the focus in Nelke. Combat is simplified compared to the Mysterious subseries, and it’s very easy to navigate. Each of the characters that Nelke can take with her in combat has their own unique set of skills, but it’s clear that not too much effort has been put into this battle system. It’s disappointing given that Gust has made fantastic Atelier battle systems over the years (see Escha & Logy for example), but given it’s not the focal point, I can understand why.

Within my twenty minutes I learned that I am likely going to enjoy Nelke more than I did the last few Atelier games. I have a hunch I am going to be obsessed with the town-building portion of the game, and I am so excited to see which characters will be making a cameo given Marie and Elie’s appearance. I look forward to getting my hands on on the full version when it releases in North America and Europe early next year.