Kazuma Kiryu and the Infinite Sadness

Last year the Yakuza series took me by surprise. While sandbox RPGs tend not to be my thing, somehow I became very engrossed by the trials and tribulations of Yakuza poster boy, Kazuma Kiryu. The world of Yakuza is shady and cruel, yet there are always hints of colour that change the perspective of Kamurocho, giving it warmth. For many yakuza, Kamurocho is life, love, and passion. In Yakuza 4, the series’ latest installment, Kazuma Kiryu takes a backseat to three new characters in the Tojo Clan, each searching for purpose and understanding in its sinister realm.

In 1985 an event occurred in which one man single-handedly murdered eighteen members of the Ueno Seiwa Clan. The Ueno Seiwa Clan had been struggling for power with the Tojo Clan for over twenty-five years. This event sets the machinations of the Tojo Clan in motion and brings four unique individuals together to solve the mystery behind the murders. Players are introduced to Masayoshi Tanimura, a crooked cop searching to discover the truth behind his father’s death, Shun Akiyama, a suave loan shark seeking purpose, Taiga Saejima, a brute who has been accused of the Ueno Seiwa murders, and the Dragon of Dojima himself, Kazuma Kiryu.

Yakuza 4 takes a new approach to storytelling for the series by having four playable main characters. Each of the four protagonists will move through a different part of the plot, and each will contribute a vital-but-incomplete chunk of the overall story. Although each character has his own ideals and individual evils, their coming together is beautifully woven and flawlessly executed. Scriptwriter Masayoshi Yokoyama has composed a story that is heartbreaking, touching, and mysterious. There are many twists and turns that will shock players, who will find themselves genuinely craving the answers to the story’s mystery. Yakuza 4‘s story shines, showing tons of maturity and prowess in its execution. 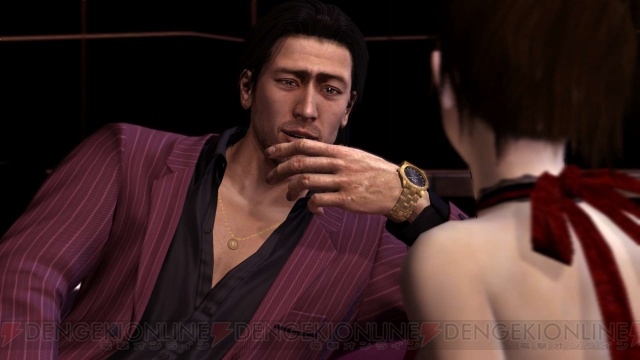 Move over, Kiryu! Yakuza has got a new poster boy.

Once again, although story takes the forefront in Yakuza 4‘s overall design, the combat system is well-refined. While sporting the same-old brawler style combat, each of the four main characters sports a unique play style that brings versatility to the combat segments. For example, Akiyama’s focus is purely based on speed, using only fast-paced kicks, whereas Saejima is built for brute force, with slower but more powerful attacks than his fellow protagonists. Each character is also equipped with new finishing moves, grapple abilities, and other techniques. As characters complete their missions and defeat enemies, they are awarded experience points which can then be used to upgrade combat skills: Body, Essence, Soul, and Technique. Each of these skills can be upgraded with skill points as characters level up, and with the new menu interface, players can sort by skill or look at an overall skill list. This comes in handy when players need to see what remains to be unlocked.

Heat Mode also makes its glorious return, as players will continue to follow sequential patterns to emit the most damage possible to their foes. Heat Mode’s first level occurs when a character begins to flash blue, where attacks deal double damage and pressing triangle executes a special move even without a weapon. Heat Mode’s second level occurs when the character flashes red, tripling damage dealt. Finishers are no longer are no longer just for bosses as they can be used on all opponents depending on the current Heat emission level. The higher level of Heat, the stronger the Heat finisher. Heat moves continue the grand tradition of being completely over-the-top, and that’s part of the aesthetic appeal that they provide in combat.

The one major pitfall in Yakuza 4‘s combat is that it does get repetitive, and does cause some pacing problems. This is mostly due to the game’s high encounter rate outside of story based missions, as random street fights constantly detract from the overall enjoyment. Had the encounter rate been lessened, it probably would have fixed the pacing issues between free time and story missions. Having said that, tons of substories are available to discover, and the return of revelations provides humorous new ways for each of the characters to unlock their special finishing moves. Exploration is a huge part of the Yakuza experience, and although the encounter rate is high, there are so many things to accomplish that exploring the new things going down in Kamurocho is incentive enough to persevere.

Unlike the two major cities of Yakuza 3, 4 restricts players to only Kamurocho. Although Kamurocho has been expanded to include new locales such as the Underground Mall, sewers, rooftops, and an underground parking lot, it still feels a lot less expansive compared to Yakuza 3. By this definition, the game is less of a sandbox. The world of Yakuza 4 is much more streamlined, and while the feeling of exploration still exists, the game’s attempts to push linearity onto players can be a bit offputting to those who enjoyed the openness of the third entry of the series. There is plentiful exploration in 4 as there are tons of substories, revelations, and challenges to complete. Minigames also make a return, and serve their purpose as a fun distraction. Thankfully, in Yakuza 4 there are no mandatory minigames, which is definitely a blessing when the majority feel clunky to control, and generally aren’t fun to play as anything but a quick change of pace. 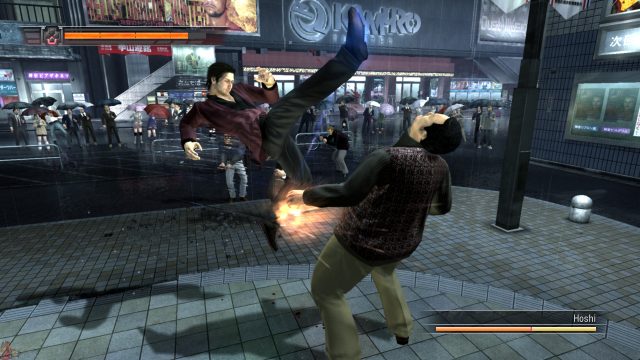 Graphically, Yakuza 4 is on par with the previous title. The visual aesthetics of Yakuza 4 takes a front seat, showcasing the strengths of the game’s plot. The cutscenes are realistic looking, to the point of almost looking too real, though this is more positive criticism than negative. The realism adds an element of “pretty-ugly,” meaning its realism is so ugly that there’s a quality of beauty within it. Kamurocho is colourfully vibrant, encapsulating the overall feelings of mystery, sexuality, and shadiness embodied by the Yakuza series. A lot of care that went into making sure that everything within the city looks completely on par with its Tokyo counterpart. Similar to its predecessor, however, the in-game graphics are much weaker by comparison, and while the backgrounds look amazing, the character models look less than stellar, as their tendency toward a slightly grainy look makes a return.

Once again, Yakuza 4 works superbly in terms of its sound quality. The voice acting, though entirely in Japanese with English subtitles, is absolutely amazing and performed excellently. The voice acting plays a huge role in developing the story and setting the overall tone, that its strength makes players feel much more immersed within the plot. The background noises are also very atmospheric, and truly make the player feel the cramped and busy nature of Kamurocho. While there isn’t a ton of music, what is there is full of variety, with pieces varying from jazz to techno, and even some rock. Some of the songs are recycled from the previous game, but it’s not as noticeable as one would think.

Compared to the previous Yakuza titles, Yakuza 4 is a much longer experience, easily surpassing the usual twenty hour mark. If players only do the main storyline, this is probably pushed to twenty hours on the dot, but those who take the time to explore everything that the game has to offer will easily exceed that length without breaking a sweat. It is also important to note that the difficulty is adjustable, and getting a Game Over twice while playing on Normal allows players to retry the offending encounter at a lower difficulty. Once the game has been completed, new game modes are opened up, such as an exploration mode, and the Extra Hard difficulty.

Yakuza 4 in a lot of ways is head-and-shoulders above its predecessor in terms of storytelling and versatility, but is a step back in terms of exploration and interaction. Still, there’s a lot of depth to discover in Yakuza 4, some of which will surprise – even shock – gamers. Yakuza 4 has many layers to explore, and will leave a big impression on gamers who are not used to rich levels of sentimentality. What it reveals is a world too much like our own, and in some ways, that may be difficult to accept. Yakuza 4 is a triumph; for those who desire to take the plunge with this series, this may be the best place to start.