Once Upon a Time

Worldwalker Games has a roguelite tactical RPG on its hands to be excited about.  Wildermyth is a turn-based tactical RPG that uses procedural generation for each of its story scenarios.  The game is simpler than it looks at first, with a progression system, that due to its randomness, provides plenty of variety.  These scenarios have their promising moments are let down by a feeling of sameness that makes the characters feel generic rather than personal.  Despite this blight, it’s an otherwise fascinating game.  Wildermyth is a blast to play through, and the enemies’ development can make every campaign feel different.

The first portion of the game is a three-chapter scenario with a villain that works as a tutorial.  After this introductory scenario is completed, four campaigns of five chapter lengths against the other story villains are unlocked.  Scenarios play out quickly and chapters can be completed in an hour or two.  Generic scenarios of three or five chapters with minimal story can be played as well.  Villain scenarios have stories that start off interesting but ultimately have a repetitive theme.  This is because the stories are left purposely vague, due to any character being able to be killed off in battle, and some campaigns lasting for generations.  Most tiles on a chapter’s world map unlock generic story events that can be found in any playthrough instead of progressing the main narrative.  An unfortunate side effect to these generic quests is that characters will act in a way that does not make sense.  For example, an event where a party finds something supernatural, such as a transformation or a talking rabbit, will always have one party member act as a believer, while the other becomes the skeptic despite being in a magical world.  Often these roles will reverse as a believer in one event can be a skeptic in the next.  Occasionally, while moving as a group, two characters will have an option to undergo a quest.  These quests only give rewards to one of the characters, levelling them up as well as increasing their retirement age.  Doing these character events is recommended for the benefits, but they are just another form of generic quest. 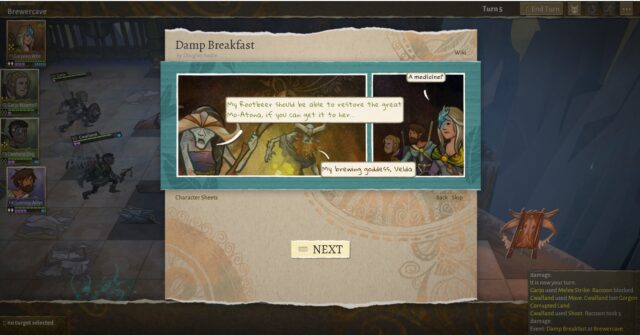 Players have access to a basic but still enjoyable trio of classes: warrior, hunter, and mystic.  Warriors specialize in close-range combat and defensive capabilities, hunters specialize in long-ranged attacks and can learn abilities to pierce armour or poison enemies, and mystics are the mage class, making use of a unique magic system.  Mystics use spells by combining with objects on the battlefield and sacrificing their health to use skills against enemies with an ability called interfuse.  For example, interfusing with a tree gains an ability called Splinterblast, which self-destructs the tree outwards damaging enemies and lowering their armour.  Mystics are very fun to use, but can feel limited due to available surroundings, which can dwindle due to scenery able to be targeted by enemies and players.  Each class has access to armour upgrades, separated by stealthier and sturdier types, and up to twelve augmentation slots to increase stats.  Weapons differentiate themselves by specializing in something unique like maces that knock back enemies or spears that have an extra square of reach.

When interacting with the map everything moves at an elongated pace.  Players start at one location on the map, with roughly ten new areas to uncover over the course of a chapter.  These new areas mostly come from a pool of generic quests that usually contain a fight.  Characters take a long time to cross the world map to a new area.  When encounters occur, the game swaps to a grid-based arena.  Characters can spend two action points before their turn is completed and each player’s phase happens before enemy turns.  Moving short distances, interfusing, special transformation abilities, or removing debuffs from a character all count as one action point, while attacking or moving long distances will take up both.  When levelling up, each character gets a choice of one of three random abilities available to the class, or a fourth that upgrades an already-existing ability to its best version.  Some abilities cross between classes allowing for melee hunters and ranged warriors.  There are plenty of abilities for each class and these options provide a lot of Wildermyth’s variety in combat as it is rare to have two characters of the same class turn out similarly.  Characters that lose all their health get one chance to survive the rest of the campaign by losing stats and becoming maimed; if they are taken out a second time, they are gone for good.  Characters sustaining injuries can only heal on the world map prolonging chapters until they’re fully healed. 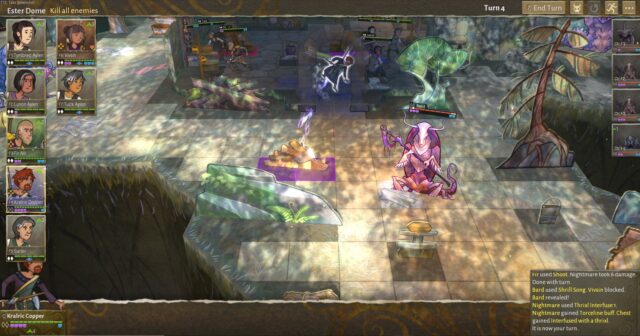 A mystic showing off his skills interfusing with a wood pile.

When a scenario completes or a player successfully reaches their retirement age, Wildermyth transfers that player to a Legacy pool.  Legacy characters are stronger, keeping all their basic equipment, skills, and transformations, and are available for hire in other scenarios as folk heroes and legends.  This is a bit frustrating as the shell of the character carries over, with history and children, but not who they married or any of their past exploits to tie them to whom the player remembers.  On the other hand, transformations that come from events are very amusing and always interesting as player characters can end up with a gem for an eye, slowly transform into a werecrow or werebear, or become imbued with the power of an element such as fire, to name a few.  Each transformation begins with only one body part, but at the end of each chapter the player has the option to alter another body part until they are completely transformed.

Combat difficulty in any given area is determined by foe cards.  Foe cards dictate what the player will be fighting in any given combat and the amount is indicated on the world map before combat begins.  Foe cards can be improved with calamities.  These are attached to a timer on the world map that causes four new calamities to appear when it reaches zero.  Calamity cards can unlock new foes as well as upgrade enemy skills and stats.  Additional cards appear after taking over an enemy-controlled area or after a set amount of time has passed.  Countdown calamity cards can be avoided by spending legacy points on preventing it from coming into effect.  Legacy points are also used in recruiting new player characters and can be earned through clearing tiles.  As long as unclaimed map tiles exist a secondary countdown occurs.  This is for incursions, large enemy forces appearing from strongholds that rampage through player-controlled territories, destroying resources as they go.  Incursions can be met on the enemy-controlled tiles or defences can be built up to meet them at a player-controlled area for added benefits.  Time management becomes important as the longer a player takes on the world map the stronger enemies will be.  This leads to a balance between how much resources to obtain with finishing the chapter as a whole.

There are five different enemy races in Wildermyth.  Upon starting any scenario, four of the five will be available to fight against, with one working as the main antagonist.  Enemy races include the misshapen, tentacled corruptions of nature, the Gorgons; the Deepists, a magically enhanced, brainwashed darkness cult; the sentient, steam-powered undead Morthagi; the Drauven race of reptilian humanoids; and the insectoid illusion-inducing psionic Thrixl.  In combat each of these races is vastly different to the others, and all are formidable in their own right. 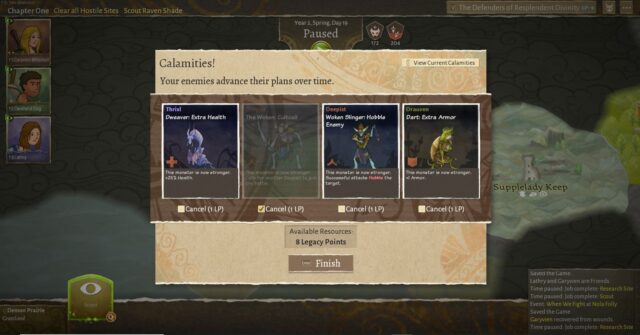 A calamity in action.

In multiplayer, the only limit to the amount of players possible is how many characters the host has hired for their party while combat still plays out in a turn-based fashion.  Players can set up their movements at any time, while actions play out in a whoever-clicked-first method.  This can be hectic but is also very creative and helps the longevity of the game if people can be gathered to play along.  This is because even public games require a password, so only people in real-world communication will be able to join or host a game.  At this time though, players cannot control the enemy races.  Hopefully this can be added in a future update as they are all very compelling.

One place Wildermyth truly excels is in its cardboard cut-out graphics in combat and drawn comic-book style story scenes.  These make the game feel like a fairy tale and each character look different.  Each character being able to change visually through transformation events or being maimed and getting a prosthetic limb is also well done, making choices matter and characters memorable.  Enemy designs are also very on point, with each race being very different from the others and unique units onto themselves.  Noteworthy units include the elegant Morthagian Butler with a cow-like skull, claw arm, and three legs, all with a mechanical gleam, and the Thrixl Drathix, a large insect-like dragon complete with faerie wings and poisonous breath attacks.  Musically there is a lot of violin in the score, yet sadly it is the definition of background noise.  Sound effects are routine and as such sound does not add or detract anything.

Wildermyth has a lot going for it from its great enemy designs to the calamity structure making each playthrough unique.  As enjoyable as each playthrough is, the unbalanced story structure prevents it from being amazing.  This can be mitigated by gathering some friends and playing through a scenario with them.  The game is a very fun roguelite tactical RPG that introduces some very creative choices, such as the entire Mythic class and transformations.  With simple combat that does not get boring even after many sessions, replayability is very high.