Coromon feels like an ideal title for those looking to revisit the GBA JRPG era.

It’s not hard to figure out the biggest inspiration behind Freedom Games and TRAGsoft’s monster-collecting RPG Coromon, but the influences go deeper than that. Being able to check out a 30-minute demo and talk to developers Jochem and Marcel, it was interesting to discover the other inspirations behind the game, including other classic GBA titles such as Golden Sun and Zelda, and learn more about it.

The demo starts with the general character creation, where players choose a name and some appearance options, before they head out to their first day working as a Battle Researcher at Lux Solis in the world of Velua. Much like Pokémon, the world is one where humans and Coromon work together, with Lux Solis being a technologically advanced organisation looking to find new ways to utilise Coromon powers. Players also select one of four difficulty options, including a special challenge mode. A custom difficulty can also be unlocked, offering more challenges, including a built-in randomiser. 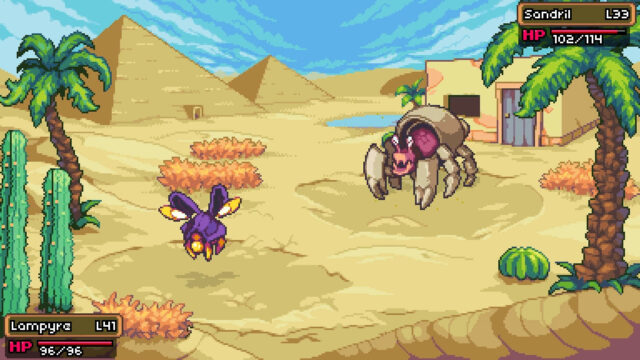 Some of Coromon’s inspirations are more evident than others.

After this, the demo jumps forward in time to some desert ruins. Here, players are tasked with looking for one of the six Titans — legendary and immensely powerful Coromon — in order to gain its elemental essence. As players descend through, they can randomly find wild Coromon to battle within the deeper sands, but they also find different types of puzzles, and these are where those additional influences shine through. One tasked the player with avoiding projectiles, which definitely warranted a bit more patience than I was initially willing to exercise, while another consisted of activating switches to open a door. Fortunately, the game is quite friendly to players who fall to traps, simply letting them try again right before the point of failure. Exploration and checking all the elements of the environment is encouraged with lots of little rewards, such as items, money, extra jokes, or mini-games.

As one might expect, Coromon come in various elemental types, and the game features turn-based combat where the Coromon use moves on each other, with players able to intervene to swap their Coromon or use an item. Players are only able to send one Coromon out at a time themselves but will often end up battling against two or more wild Coromon. Individual species of Coromon can come in three colour variants, which indicate that Coromon’s maximum potential. Potential doubles as a secondary experience level, and when this reaches the next level, players are able to select which attributes to upgrade as opposed to the automatic regular experience level-ups. 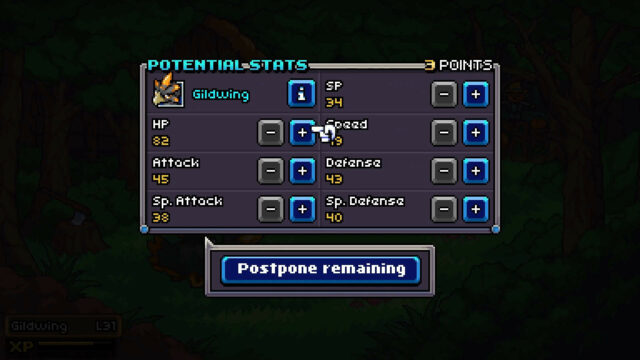 Players get some control of their Coromon’s advancement when its potential levels up.

The flow is largely the same as that of Pokémon, including the vital importance of taking advance of elemental weaknesses, though there are some small differences that help differentiate the game. Each Coromon, including opposing ones, has a general stamina meter that is used up with each move, but they can spend a turn to restore half of their meter, adding a small strategic consideration. At first glance, the UI doesn’t seem to display very much information, but almost all of the elements can be easily expanded and will readily supply all of the extra detail a player might want, such as seeing any current affected stats for both their Coromon and the opponent’s or getting a reminder of what a particular ability does. There are around 120 Coromon in the game, with more to be potentially added. Though capturing new Coromon wasn’t included in the demo, there will be multiple ways for players to obtain them, including as quest rewards. A logbook will let players keep track of any ongoing sidequests.

After a couple of floors in the dungeon, the demo skipped ahead to its boss battle against the Titan Sart. Dungeons should be of a decent length, will the full version of the one in the demo to feature around seven floors. The boss battle lived up to its status. Sart is considerably stronger than the other Coromon around, with a much greater HP pool. The fight also featured multiple stages, with him sending out a couple of additional Coromon once reduced to half health, as well as unleashing a strong attack on his return after they were defeated. It definitely felt fairly balanced, however, offering a good challenge that a sensible strategy and similarly levelled Coromon can overcome.

Coromon feels like an ideal title for those looking to revisit the GBA JRPG generation. The visual style certainly evokes the charm of its inspirations, with vibrant colours and battle animations that feel right out of that era of Pokémon titles. It includes some good modern touches to help avoid some of the limitations of the era as well, so those looking for a new monster-collecting RPG will do well to check it out when it launches for PC, Mac, and Nintendo Switch in early 2022.