A tabletop-inspired, card-based RPG is probably not the project many would have expected as the next outing from some of the minds behind action RPG series like Drakengard or the critically acclaimed Nier. To be fair, the term “card-based” conjures up visions of deck-building games, which Voice of Cards: The Isle Dragon Roars decidedly is not, instead forging its own unique path as a more traditional turn-based fighter using RPG-themed playing cards as its medium. This approach is at first quite charming, and indeed does boast good production values. But there are some repetitive aspects of the game that turn its latter half into much more of a grind than is welcome, even with a relatively short runtime of just under 20 hours.

Originally conceived as a mobile title, Voice of Cards was eventually retooled into a small-scale console release. Developer Alim has previous experience in this arena, working for Square Enix on such mobile titles as Final Fantasy Brave Exvius. Several Cavia staff members also lent their expertise, most notably creative director Yoko Taro, though it’s important to note that this game is far removed from Cavia’s usual wheelhouse.

The world of Voice of Cards is presented entirely via cards arranged on a large grid as if laid out on a tabletop. This includes everything from fields to forests, mountains, bodies of water, and roads. Each card represents one step in the overworld, and all cards are initially laid out facedown, flipped right side up only when the player’s avatar enters an adjacent space. Towns, caves, and other landmarks are also presented this way; entering one of these causes all cards on the virtual gameboard to be cleared away and replaced by another layout representing the new location. Even characters and shops are depicted via cards, and can be interacted with by stepping onto their spaces. 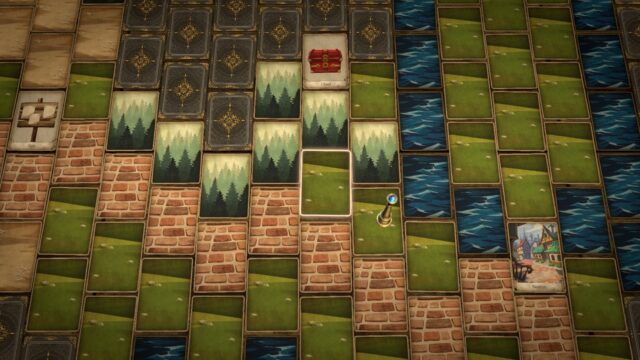 Exploring the world begs the question of what the cards have in store.

Initially, this makes for a very intriguing way to take in the world, emulating the experience of sitting around a table with a group of friends and discovering the fictional world as the DM unveils it one tile at a time. Eventually, however, this devolves into little more than a gimmick; it’s never bothersome, but it doesn’t do much to push the envelope with original ideas beyond its unique presentation. Instead, both the overworld and any dungeons the party explore show little variance from the beginning of the game to its end: open fields, mountain ranges that must be circumnavigated, and forests dotting the landscape, while indoor spaces consist mainly of bare hallways and empty floorplans, with a staircase at one end to ascend to the next level. There’s some satisfaction to be had in flipping every card in an area, but without any tangible reward for doing so it is essentially just a way to fill up an unseen progress bar.

The artwork visible on character cards is certainly pleasing, with large and detailed designs for both player characters and NPCs. Monsters, too, benefit from this level of attention, though variety is a little slim at 40 monster types, quite a few of whom represent palette swaps. Despite all card designs being entirely static, the developers have gotten a bit of mileage out of them for the game’s narrative moments: Conversations, arguments, or physical altercations are depicted by having cards bounce in place, jostle against one another, or pummel each other wholesale. These silly animations, along with the writing, inject some levity into an interesting enough, if straightforward, story: the queen has rounded up all of her kingdom’s most daring adventurers, promising riches beyond measure for slaying a foul dragon. This simple premise, and a twist or two along the way, sees the game through to its end, as players take on the role of the underprepared Ash and his band of allies as they pursue the beast. 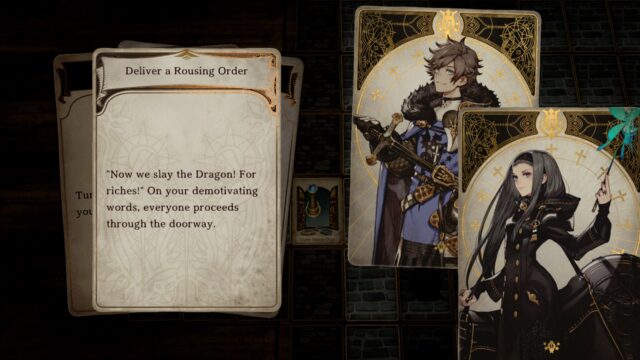 The narrator makes the journey feel like a tabletop session with friends.

The party’s entire adventure is relayed by the narrator, adding much to the game’s immersion. He not only orates the events as they occur but also gives voice to each character’s dialog, essentially becoming the dungeon master. It adds to the sense of whimsical creativity and really emphasizes the idea of participating in an interactive tabletop campaign. The soundtrack fares less well; the medieval tunes played throughout much of the adventure (the composer himself has stated an Irish influence to the music) work well enough to set the tone, but do repeat quite a bit. The best of the lot here may be the main menu music, which heavily evokes the feel of Nier‘s haunting, ethereal compositions.

Though the game presents itself well, it does suffer in its combat — less the mechanics than their execution. Three active party members can equip up to four skills apiece; these range from weapon attacks to elemental magic spells. Each skill exacts a casting cost of a number of gems, with only the most basic of attacks being free to use. The party gains a gem each time an ally takes a turn, allowing frugal players to activate the more powerful skills. As characters level up, new skills are periodically learned and can be swapped into combat rotation between battles. It’s a good system, but the enemies are far too easy to force much strategic play. Often, using an enemy’s elemental weakness against them makes the encounter incredibly trivial, and the lack of enemy variety forces combat to get stale too quickly. Add to this a frustratingly high encounter rate, load times each time combat begins or ends, and the fact that it is easy to hit the level cap for all five characters well before facing the final boss, and the combat system winds up being full of promise but low on purpose. 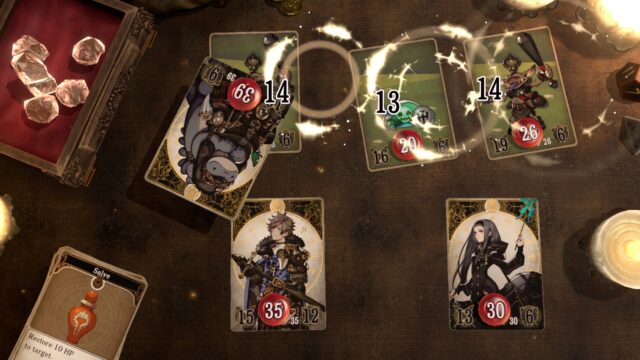 They may be flat, but these cards do feature lively skill animations.

It seems smart, then, that the developers have implemented a special item that will allow players to skip all random encounters entirely, though it is perplexingly only granted when starting a New Game Plus, and the game simply includes little — if any — replayability. Everything Voice of Cards has to offer can easily be achieved in a single playthrough, including unlocking all four endings (though this does require the final boss fight to be completed four individual times). Between a mere handful of simple sidequests to find and complete, an optional post-game boss fight, and a few trophies for gathering all weapons, armor, items, etc, there is little here to warrant much time spent with the game after the credits have rolled.

Voice of Cards: The Isle Dragon Roars is an entertaining and creative diversion while it lasts. It certainly sets itself apart with relative ease but it does suffer a bit from diminishing returns. It’s by no means lacking in merit and feels like much could be built around its robust framework in the future. But it is an experience limited by its own arbitrary boundaries, like the negligible challenge and the disproportionate amount of time one will needlessly spend in repetitive battles for few worthwhile rewards, particularly once all skills have been learned and levels are maxed out. Still, there are many lovely ideas at work here, and the package in which they’re presented is even lovelier, leaving me eagerly looking forward to further tales of this style that can be told down the road.