It’s only been a matter of months since the first game released, but Voice of Cards: The Forsaken Maiden has swiftly come in to follow up Voice of Cards: The Isle Dragon Roars. Very much following the same template as its predecessor, with a story and gameplay told entirely through cards and its game master, The Forsaken Maiden is a more welcoming experience as its presentation and steady gameplay create a relaxing experience.

The Forsaken Maiden features a distinct story from The Isle Dragon Roars, with only a small Easter egg being the direct connection between them, and so is perfectly fine for newcomers to jump right in. It features a new game master, voiced by Mark Atherlay, who offers a pleasant narration that fits nicely with the events, visuals, and music, and takes players to a new oceanic setting. Players control a young man who lives on Omega Isle, one of a number of islands that relies on the protection of a Maiden. However, the island doesn’t have a Maiden and is thereby doomed to suffer its end. 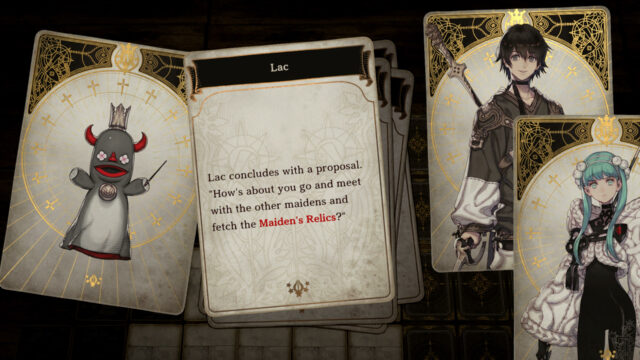 In lieu of any other options, one may as well listen to the handpuppet.

Unlike the other islanders, the protagonist is not one to give up and has joined up with a mute girl named Laty who wishes to become the island’s Maiden but has not been able to. The two soon come across a handpuppet-like being called Lac, who informs them that Laty can become Omega Island’s Maiden and save it if they borrow the relics from other Maidens and use them to heal her “heartscars”. They thus set out on the protagonist’s boat to the other islands of the archipelago to gain the assistance of their Maidens.

Following this opening, the story is structured into four main acts, each focusing on one of the four other islands and the story of each island’s Maiden and their attendant. As one might have come to expect from a title with Yoko Taro as Creative Director, the story absolutely has melancholic and heart-wrenching moments, but there’s always some bittersweetness to it. The narrative brings players on board quickly and the individual stories are short but sharp. Though players will see some of the dramatic beats coming from a long way off, the writing, localisation, and presentation do a fine job bringing it together.

Part of what makes the narrative pay off is a deliberate pacing of the game. The gameplay experience is a very relaxed one as players move their counters across the card maps, overturning them as they go, or bear witness to the narrated events. It encourages players to take their time and enjoy the beautiful music from Keiichi Okabe’s studio Monaca, with most tracks composed by Oliver Good and Shotaro Seo. While the short time since the last title means the novelty impact of being told entirely with cards is greatly lessened, it’s still effective and the artwork and animations use the medium nicely. It’s always pleasant to look at, and the sounds and movement of the cards, gems, and dice have a satisfying air to them. 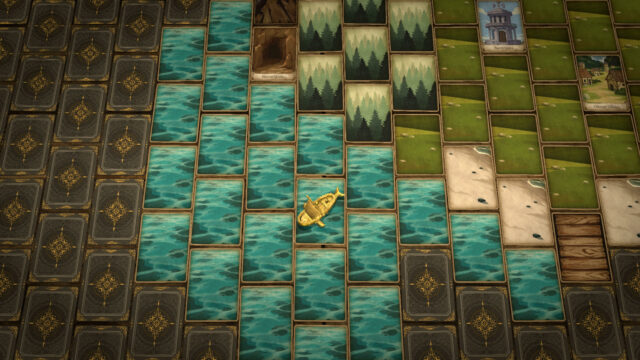 The turn-based combat is likewise deliberately paced. The protagonist and Laty are joined by the relevant Maiden and attendant during each act to establish a four-person party, with Lac filling in as a third member when the two are on their own. Fights feature up to four enemies, though most commonly two or three, with turn order determined by character speed. Each character has up to five actions available, many of which have a gem cost associated with them, plus the option to skip their turn to gain an additional gem. Up to ten gems can be held at once, with the party gaining a gem at the start of each character’s turn, and balancing the use of these gems is the primary differentiator between Voice of Cards and other straightforward turn-based systems.

Damage is calculated by comparing attack and defense scores — readily visible on the character cards — and applying any relevant modifiers, which can include dice rolls as well as elemental weakness and resistances. There are also status and buff effects, but each combatant can only have one negative and positive effect at once. The combat is solid and the strategic elements come into play nicely in the boss battles, but it gets very repetitive as a result of a high encounter rate and a limited variety of regular enemies. Once players have an effective combination for a particular area, they’ll only need to diverge from it for a boss fight or some occasional healing. Despite the repetition, the rhythm behind combat largely complements the rest of the game. 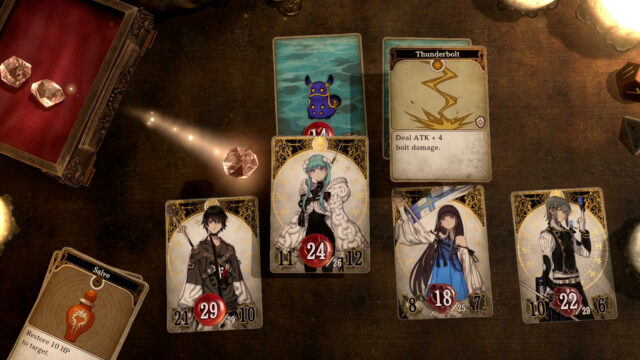 Managing gems is a key part of combat.

Character growth and upgrades are simple; traditional levelling slightly boosts HP and occasionally another attribute, with bigger upgrades coming from equipment. However, only the protagonist can change their weapon, and only the protagonist and Laty can change their armor and available skills, with the guest Maidens and attendants only allowing players to change their accessory. There are points in the game where players are given choices, though most of these are superficial. There are a couple of side quests where the choices affect how those play out, but these aren’t referred to again thereafter. The biggest decision comes at the end, but it merely determines a variation on the game rather than having an impact on any subsequent events. Aside from letting players choose the order they tackle the last two Maiden stories, the game is also quite linear. Exploration will reward players with some useful items but little else, and there’s always a single path to progress; however, the combination of the music and satisfaction of getting all of the environment cards turned over will be enough for many.

Voice of Cards: The Forsaken Maiden is a solid follow-up to The Isle Dragon Roars and is actually a more welcoming point for newcomers to jump in. Its pacing and presentation makes for a relaxing and generally chilled experience that still comes with plenty of emotion in its bittersweet narrative. There’s definitely reason for Square Enix and Alim to return to the Voice of Cards world, and it may once again be sooner than expected.