The existence of Valkyrie Elysium is almost a miracle in itself. Fans of the Valkyrie Profile franchise will recall the series has long felt dormant, with the last console entry in 2006. These games told sorrowful tales of a Valkyrie as she purified souls during the world’s march towards oblivion while boasting innovative, strategic turn-based battle systems. It’s been a long road since for Valkyrie fans, with a DS prequel released in 2012 and a short-lived mobile gacha game in 2016. It is from this long shadow that Valkyrie Elysium emerges, offering neither the turn-based strategic combat nor the continuation of the parent series proper. When judging this spiritual successor on its own merits, however, the brilliance of the parent series shines through in the spirited battle system and spectacular music.

Players are introduced to the Valkyrie, a lesser god created by the “All-Father” Odin, who is embattled and injured after a conflict with the mighty Fenrir set during Ragnarok, the end of the world. Valkyrie has been created for the express purpose of finding and purifying lost souls as a way to bolster support for Odin during the dragging conflict. Her awakening serves as the start of the game, which doubles as a thankfully brief tutorial to the battle mechanics.

The titular Valkyrie is enigmatic and taciturn, singularly focused on her mission to a fault. She quickly runs into conflict as she encounters Hilde, another Valkyrie who opposes the All-Father’s mission, which both infuriates and puzzles the protagonist. As Valkyrie works through Midgard, she purifies souls and recruits the strongest as her Einherjar, warriors who serve her in furthering Odin’s cause. As Valkyrie purifies their souls and join her party, players are able to experience the individual Einherjar’s own tale of sorrow and regret that led to their demise. 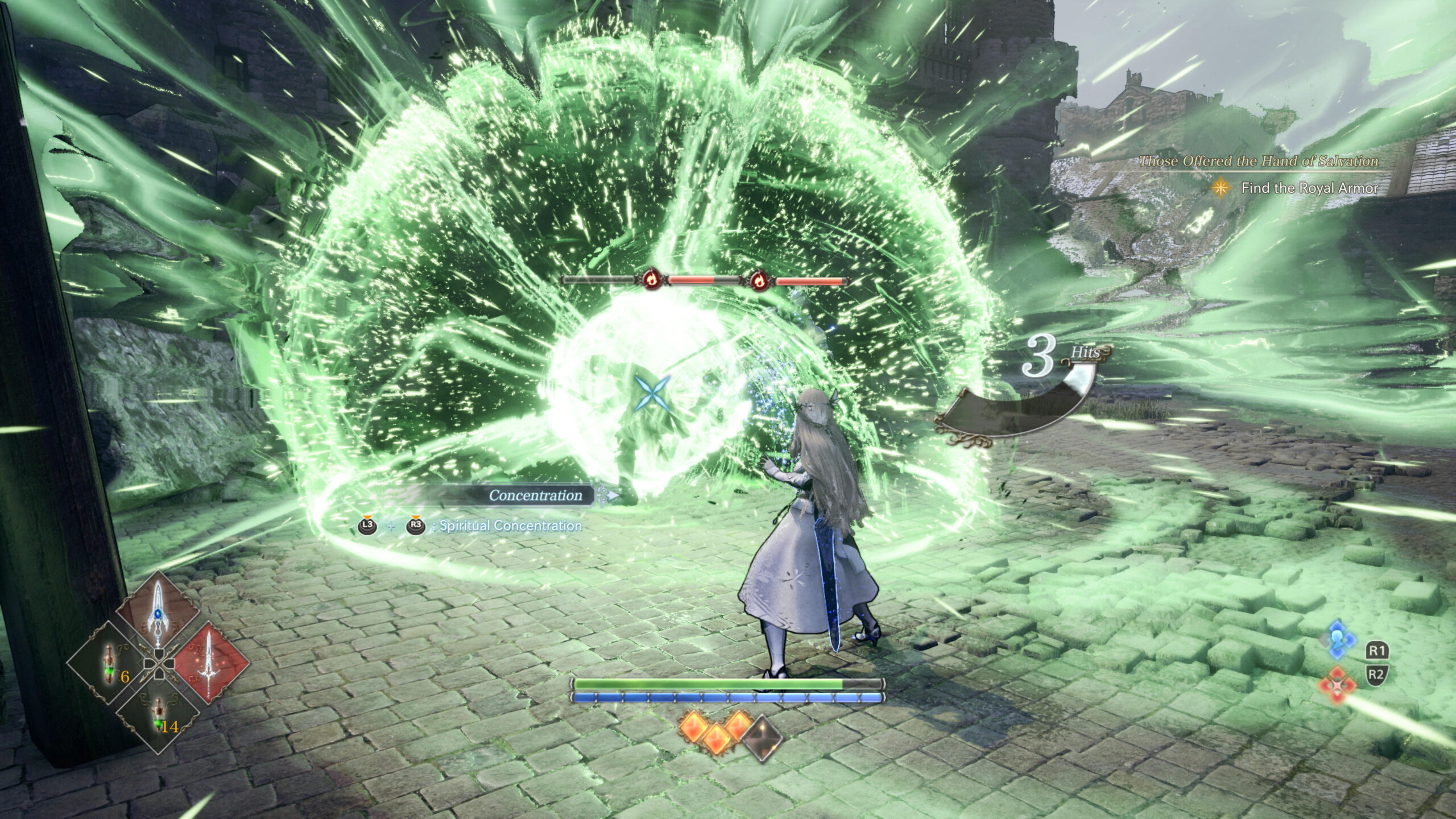 The Divine Art animations are spectacular.

The overall plot of the story is brief and predictable, if not entirely telegraphed from the onset, as it is very clear that Odin’s machinations are shrouded in half-truths. It is through the strong characterization of the Einherjar, and Valkyrie’s forged relationships with them, that the narrative finds any emotional footing. The banter between party members is another highlight, as believable relationships are forged between literal ghosts from different time periods. Watching Valkyrie’s bemusement at their humanity, even in the afterlife, is enjoyable as she has no understanding of the complexity of human emotions.

Even though the apocalypse is nigh, it is still surprising how empty Midgard is, with little to no townspeople to interact with. Players can collect Hollow Blossoms, flowers containing the last memories of those who lived on Midgard, presenting the final thoughts of these citizens to players through a text box. The effort is commendable, but this world building is paper thin and is little more than a collectible hunt. Otherwise, the Einherjar that surround Valkyrie are likable and complex enough given the brevity of the narrative, while the conflict with Hilde provides dramatic tension that fuels the plot forward.

Where the story is sparse, the game makes up for it with dazzling combat. Battles are fast, fluid, and easy to follow, with players exclusively controlling Valkyrie in a shift from the turn-based mechanics used in earlier games in the series. The transition to action-oriented combat is gracefully handled, with a sufficient infusion of Valkyrie Profile DNA that feels organic and natural. Valkyrie can equip two weapons and alternate between them on the fly to exploit enemy weaknesses. Basic attacks are utilized by pressing specific buttons; as combos are successfully landed and enemies defeated, Valkyrie’s Soul Gauge fills up, allowing the Einherjar to be summoned. By holding L2 and hitting a mapped button, Valkyrie’s Divine Arts can be deployed. These Arts include a variety of special attacks and healing magic. Targeting enemies is precise and smooth, especially during encounters involves waves of them. There are some intermittent camera issues bogging down the action during close range combat, but it is infrequent enough. 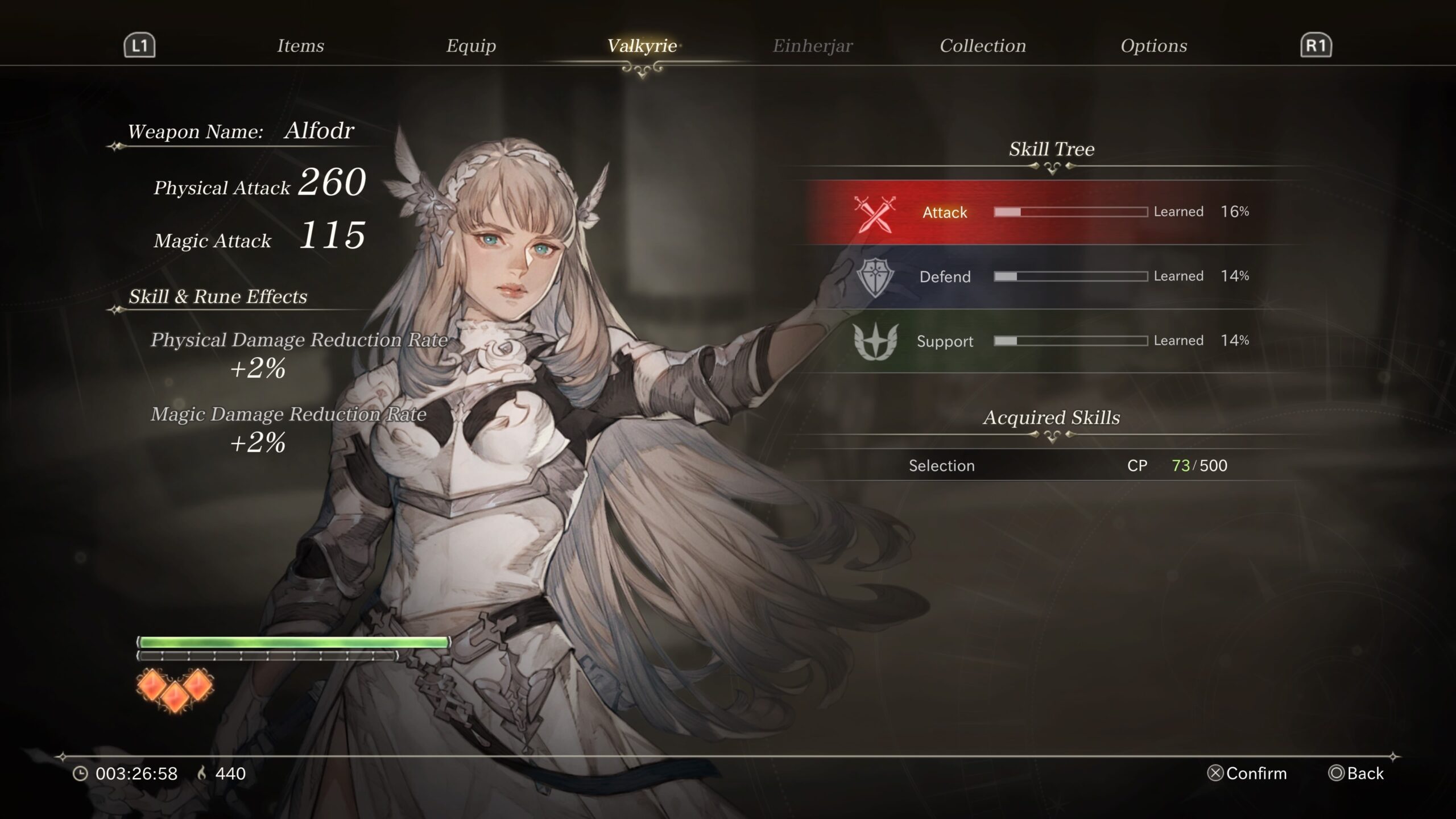 As enemies are defeated, they drop gems that can be allocated to provide stat increases, upgrade weapons or unlock new abilities, and build up the Valkyrie’s Soul Gauge. With the Einherjar, Valkyrie Elysium takes a concept from the parent series and modernizes it. Valkyrie is able to summon them in battle only after sufficient energy has been amassed. The summoned ally will appear for a limited duration, utilizing their own skills as well as providing elemental bonuses to corresponding attacks and spells. Outside of battle, Einherjar can be invoked to provide navigational assistance, like creating a platform out of magic in another nice callback to the limited platforming in Valkyrie Profile.

While there are no formal levels for Valkyrie or the Einherjar, there is still a sense of progression throughout the game. Valkyrie’s Divine Arts are found in treasure chests, usually as a reward for completing a story mission but also frequently tucked away in corners of the expansive levels, rewarding curious players for their diligence. Valkyrie’s weapons can be upgraded, increasing attack power and unlocking new attack combos. Each weapon is also able to equip runes, providing additional perks or buffs in combat. The Einherjar do not have levels or equipment to tinker with, but they also demonstrate progress, as they are given stat increases based on the frequency with which they are summoned in combat. Completing their optional sidequests also provides new combat abilities as well, exhibiting their own growing powers along that of their master. Again, the combat system maintains the zeal of the parent series even with the pared down RPG mechanics.

The quality of the graphics varies greatly, with striking character models and environments that are accentuated with a cel-shaded effect. The character models for Valkyrie and other main characters are detailed and expressive, although Odin’s facial rendering in particular looks a touch too plastic. On PlayStation 5, there were no noticeable slowdown or other graphical issues. There is some disparity in graphical quality, however, as some in-game renderings of characters look significantly inferior to their story scene counterpart. Valkyrie’s hair mechanics are simply unruly, her hair whipping about with some questionable physics. The enemy designs are ghastly remains of creatures and humanoid forms that well represent the theme of mired in death and decay, if only there was more variety to them. Boss designs in particular are well-designed as unsettling abominations of human and animal forms. 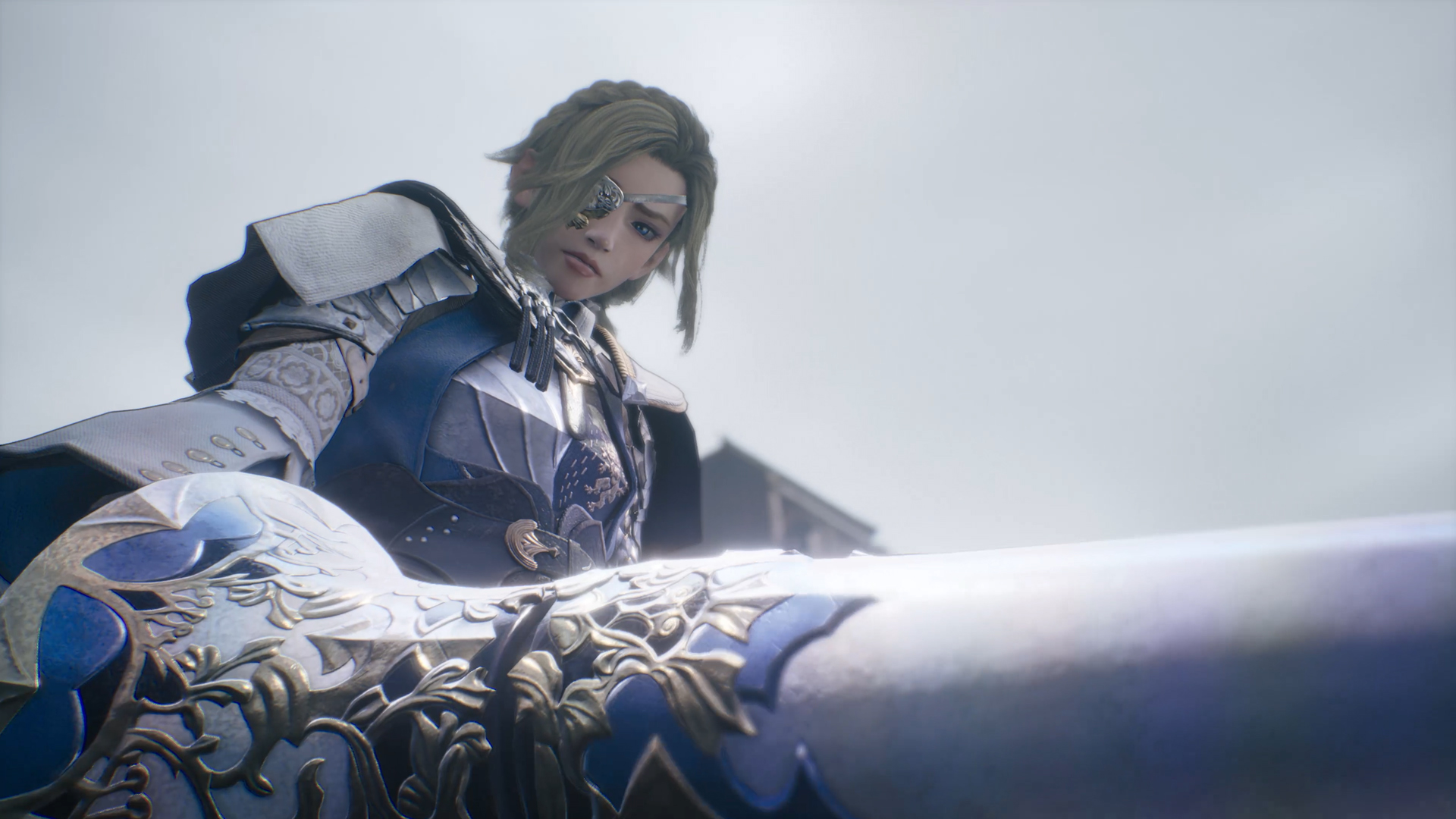 The Einherjar provide much needed characterization to the story.

The music is composed by series veteran Motoi Sakuraba, who is also known for his work in the Tales series. Fans of either series will recognize his work instantly, and his work in the game does not disappoint. The themes are dynamic, shifting from melancholic to aggressive versions of the same track when combat is initiated. This soundtrack highlights some of Sakuraba’s best work for the series. These renderings are downplayed some by the English dubbing not syncing with the lip movement causing a blemish on the presentation. The voice acting is another high point. Valkyrie and her Einherjar are particularly well cast, quickly establishing a repartee during cutscenes and in-combat banter.

The most intriguing mechanic in Elysium is the Soul Chain, which is able to serve as a grappling-hook at designated locations, as well as used in battle. The Soul Chain is impressive to observe and deploy in combat, although there are surprisingly few instances of use outside of battle, where it mostly allows Valkyrie to traverse difficult spaces and often leads to hidden locations with treasure chests or Hollow Blossoms. 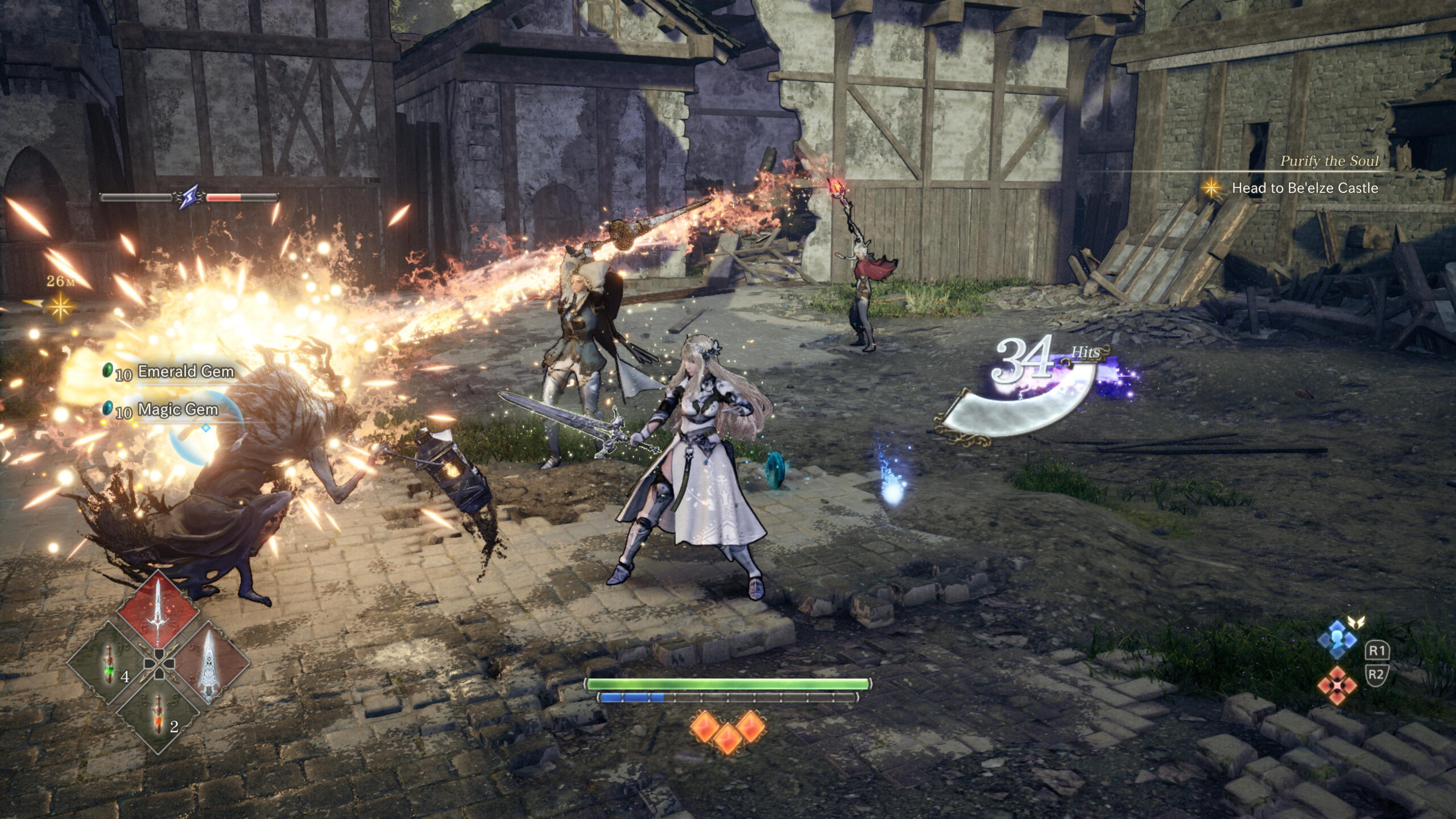 Players can exploit weapon and elemental weaknesses for maximum damage and rewards.

The levels themselves are well designed, sprawling in size with many items and other collectibles tucked away in corners. Repeat visits to each level for subquests finds them taking place in smaller sections of each map which minimizes the feeling of repetition. The user interface is sleek and minimal, with clear design approach and button mapping for attacks, items, weapons, and Einherjar. While the emphasis in this game is clearly on the action, the backend is easy to navigate and it allows players to make the necessary changes to abilities and weapons on the fly, without too much interruption on the action.

Aside from the dynamic combat, there is a world building problem that is only addressed partially by the endearing supporting cast. So much of this Midgard is implied, with no true peek at the world and war before Ragnarok. Players are treated to a mostly empty world and are expected to assume it was previously full of life. All that remains are undead enemies, boxes to break, and some NPCs hidden behind locked doors in a village or two. The text-only Einherjar vignettes and Hollow Blossoms are nice flourishes that provide some context for this dying world, but they are not enough to combat the feeling of sterility. Why save a world with nothing and nobody left?

Despite the action trappings, Valkyrie Elysium shows deference to its spiritual ancestors in terms of aesthetic, tone, and emphasis on strategic use of allies in combat. Those looking for an expansive narrative will be disappointed as there is polish missing in the presentation and story, but that does not detract from an exhilarating combat system and enjoyable interactions between the Valkyrie and the Einherjar. Valkyrie Elysium may not be the game long-suffering fans have been asking for, but it represents an organic shift for the series that can appeal to fans and newcomers alike.